On Saturday before last we performed a SAT (Sea Acceptance Test) of the Nexø I rocket and associated systems. The aim of the test was to simulate a launch in every detail, however minute. This is done to work through all systems, check lists and procedures, to ensure that everything is validated, so that we won’t experience any surprises later. Or rather, as few surprises as possible. One thing that I have learned during my years in CS, is that Murphy is always a backseat driver. And what goes wrong is rarely related to the rocket or a primary system, but some silly problem that no-one had anticipated.
This test was no exception! According to plan, all systems would be installed on Sputnik and Vostok, and then both ships would participate in a launch simulation test while at sea in Øresund. A test including all procedures up to the point where the rocket is commanded to initiate auto sequence start and continue to T=0. The only difference between simulation and a real countdown is the lack of fuel and oxidiser in the tanks. Instead the tanks are pressurised with nitrogen, which tests the piping and the automated pressurisation systems installed on Sputnik.
A couple of weeks ago we performed a similar, but less complete test in the harbour – which, as you may know, revealed a number of small leaks in the rockets piping. Leaks that have since been rectified.
To acknowledge problems beforehand is always nice – and what can be more frustrating than having an advanced rocket with its ground control system, thousands of lines of code, triple frequency telemetry radios, video downlink and other stuff performing perfectly –
AND THEN VOSTOK’S MAIN ENGINE REFUSE TO START!! 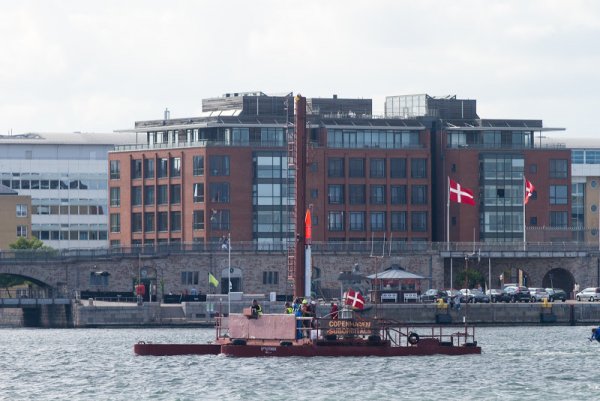 According to plan, the SAT would be performed at sea in Øresund with both Vostok and Sputnik – but due to motor issues Vostok remained berthed and Sputnik had to sail around inside Copenhagen harbour. Photo: Thomas Pedersen.

Vostok was built in 1969 at Abeking & Rasmussen shipyard in West Germany, and commissioned as a search and rescue ship with the name « Günther Kuchenbecker ». She’s an impressive boat with her 900 HK main engine, hydraulic auxiliary engine, dynamo, and ingenious tank system designed to bunker around 5 cubic meters (1,300 US gallons) of diesel. She’s an extremely seaworthy vessel built to weather the harshest of sea conditions and to right herself from heeling with the bridge at the waters surface. 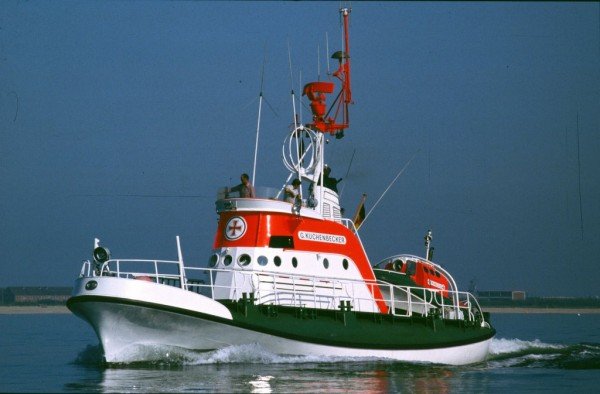 Vostok aka « Günther Kuchenbecker » in her heyday off Maasholm in July 1982.

This is also her major disadvantage, as she’s a complicated and regrettably ill maintained lady to work with. Since she became a part of the CS fleet back in 2012, a handfull of CS members have attempted to get her operational, but over the years problems have kept popping up. Jesper Rosendal, Niels Johansen and Jacob Larsen have renovated the main engine turbos and Peter Scott has minutely documented her electrical wiring, labeled in german, norwegian and icelandic – where labeled at all. Tanks, hatches, valves and tubing has been inspected, from here to Antwerb.
Our biggest problem at present is the diesel tank system. Vostok is a super optimised machine – which means that all available space is utilised, and the tanks are distributed in a way that makes it possible to trim the ship at sea by transferring fuel between different tanks.
Some of the tanks are placed in the bottom of the ship, others are an integrated part of the hull structure, which makes it imposible to cut them open for a thorough inspection – or make repairs. Vostok has 7 tanks in all, interconnected through an ingenious network of piping, tubing, pumps and valves – all of it undocumented, of course. For our use – which is sailing between Copenhagen and Bornholm, and sailing between Bornholm and ESD139 – we don’t need all of the fancy tanking capabilities of Vostok, which is why closing off the tanks with corrosion problems has partially solved our problem. Instead we only use the two main tanks, which have been checked regularly for diesel plague and debris. But apparently not thoroughly enough. As it turned out, the problem was a considerable amount of gunk in the bottom of these two tanks – apparently accumulated over the last 50 years or so.

At the moment, as is usual this close to launch, there’s a flurry of activity in all departments. The rocket and its subsystems are confirmed ready for launch, which leaves us struggling with « everything else ». 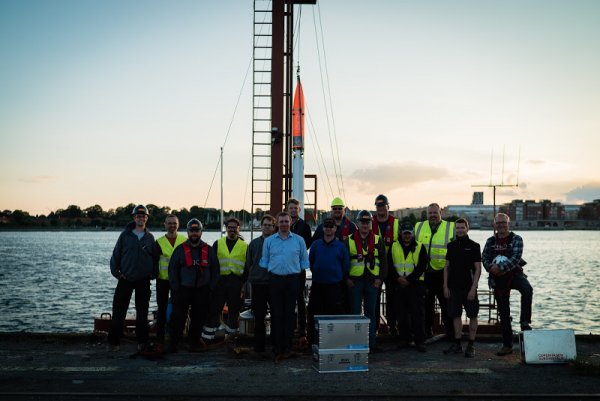 The entire SAT test team after a LONG day filled with challenges of all kinds – but the rocket passed! Photo: Thomas Pedersen

Curiously enough, time and again it is found that the hard part of « rocket science » turns out to be the surrounding logistics and support systems that just have to be functional. Jesper Rosendal et al are in the middle of a strenuous battle to return Vostok to operational status with at least one main tank thoroughly cleaned. The cleaning isn’t straightforward, as the engine room is densely packed and EVERYTHING is hard to access. At the time of writing, Vostok is the largest uncertainty for the launch to happen as planned on July 16th – apart from weather, of course.

As announced on www.copsub.com we plan on the launch to take place on Saturday July 16th, with Sunday July 17th as back-up. Prior to this time Vostok will have to return to operational status, and she will also have to perform an extended sea test – and we need to have a suitable weather window for sailing Sputnik to Nexø.

Lacking cooperation from the weather (and an elderly german lady), the next possible launch date is Saturday July 23rd, with Sunday 24th as back-up.