It is now a couple of weeks ago that Nexø I ascended majestically above Sputnik. Flemming has already told a good deal about the flight in this blog. 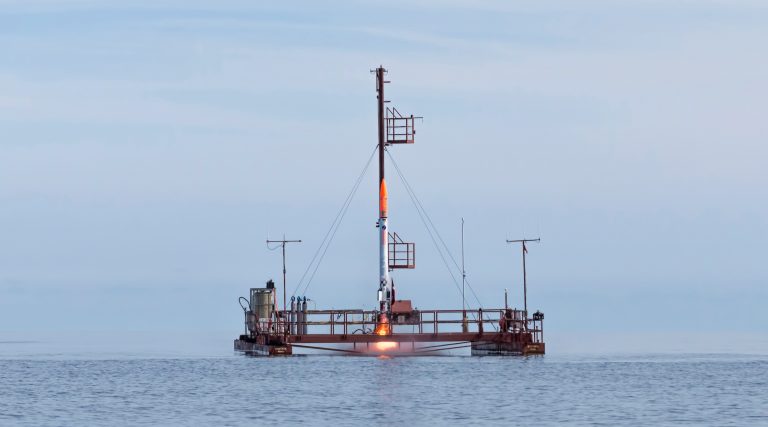 As can be seen, both above and in Flemming’s blog, Nexø I had an incredibly straight flight with a very low roll rate. This is the result of at least four important circumstances:

We do not control the latter, although we choose to launch in nice weather only. The three former circumstances are totally dependent on how well we perform, and the Nexø I team has certainly delivered. We have however had some issues, primarily the flight altitude … we did aim significantly higher than 1514 meters, so let us have a look at the data from Nexø I, to gain an understanding of the flight events.
First the pressure sensor data from the flight. The time axis zero is at main valve opening, the pyrotechnical igniter is activated at T minus 2 seconds. 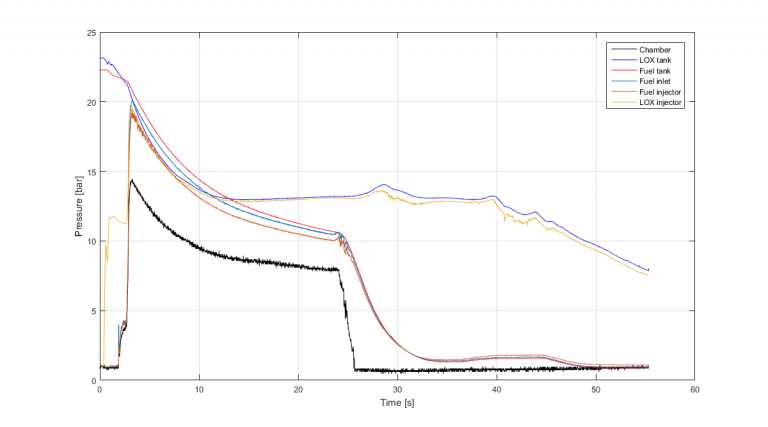 Pressure sensor data from Nexø I during flight.

As it can be seen, we start out with a fuel tank pressure of 22.3 bar and a LOX (Liquid OXygen) tank pressure of 23.1 bar, precisely as expected due to the automatic pressurisation system. As usual we have a pre stage with the main valves opened to 40 degrees. At this early stage we observe the first deviation from observations obtained during static test. Normally we observe a LOX injector pressure at approximately 4-5 bar at pre stage. Here we observe around 11 bar at T + 0.96 second, substantially higher than the pressure obtained at static test. The fuel reaches the injector with a considerable delay as the cooling mantle has to fill up. This is nominal behaviour, and the pressure in the fuel system rises at T + 1.89 second. After the cooling mantle is filled, the fuel transits and exits the injector, the Engine Controller wait for the chamber pressure to exceed 2.5 bar for more than 500 milliseconds, after which the main valves is commanded fully open. Immediately after valves reach fully open we expect a chamber pressure just above 15 bar due to the tank pressure values chosen, but we do not obtain this, the pressure instead peak around 14.4 bar at T + 3.28 seconds.
From here on the chamber pressure drops somewhat faster than expected and reach 9.5 bar at T + 10 seconds. Up until this time the tank pressures have decreased with the chamber pressure, but from T + 10 seconds onwards we observe that the LOX tank pressure stabilises around 13 bar. The fuel tank pressure, on the other hand, continues to decrease steadily until T + 24.4 seconds, at which point chamber pressure and fuel tank pressure drops rapidly, a sure sign tha the fuel tank is depleted. The LOX tank maintains a pretty stable pressure at around 13 bar until T + 40 seconds, after which time it starts decreasing. There is however still an 8 bar pressure in the LOX tank as aquabraking is initiated. 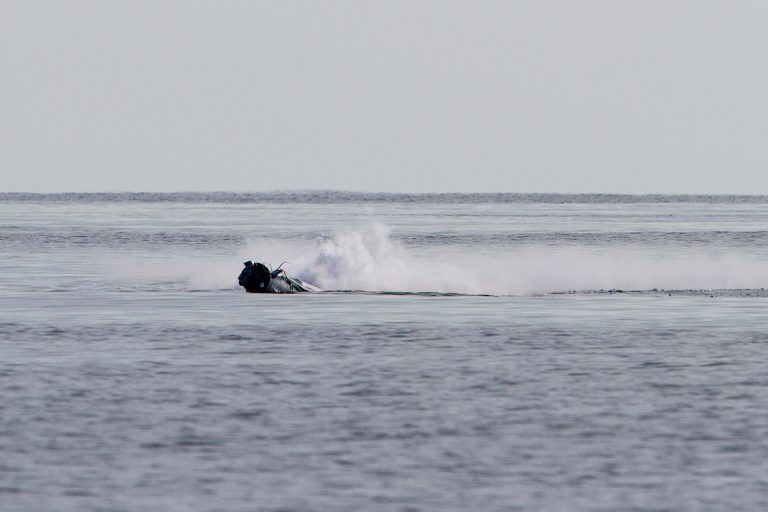 The LOX tank still contained a fair amount of LOX at splashdown, which boiled off in the water’s surface. Photo: Morten Bulskov.

We observe a peculiar behaviour on the LOX side not experienced before during static test. The stable pressure at around 13 bar from T + 10 to T + 40 seconds more or less reveals what has gone awry. The stable pressure can have one of two causes, either the main valve is closed, or the pressure is maintained by rapid evaporation of LOX forming GOX (Gaseous OXygen). The former can be excluded as the position of the main valves is logged by the ECU (Engine Control Unit), and these data show both valves open until splashdown. The other cause is better known as VaPak or autogenous pressurisation.

Having pressurisation through VaPak from T + 10 seconds is an obvious indication that the LOX has been warm, is has only been held at sub-critical state by a high pressure. In this state the slightest fall in pressure will result in the LOX shifting to super critical state where it evaporates at a rate high enough to maintain a stable pressure. This may sound like a fantastic feature, but for Nexø I it proved fatal. In its present design, the BPM-5 engine injector isn’t capable of working correctly with super critical LOX, the injector is designed to inject fluid, LOX, and not GOX or some obscure combination of LOX and GOX for that matter. Had we just had a thermal sensor in the LOX dome, we would now know the exact conditions …

Based on the pressure charts we can conclude that the LOX has been close to going critical from the very start. From this we can assume that we have had GOX flow through the injector from the very start, resulting in a lowered mass flow. This has again resulted in lowered chamber pressure and thus a higher than expected fuel flow. This explains both the low engine thrust and the relatively fast depletion of the fuel tank, resulting in the tank being depleted at T + 24.4 seconds.

An additional indication that the engine has been performing very far from the intended operating point can be found in the engine’s temperature data. We measure the fuel temperature at the fuel inlet at the bottom of the cooling mantle and again as the fuel reaches the injector. The fuel temperature will nominally have risen around 43 degrees after passing through the cooling mantle. As can be seen from the graph, the temperature was only raised 18 degrees during the Nexø I flight. Basically this can only happen if the oxydizer/fuel ratio is extremely fuel rich. 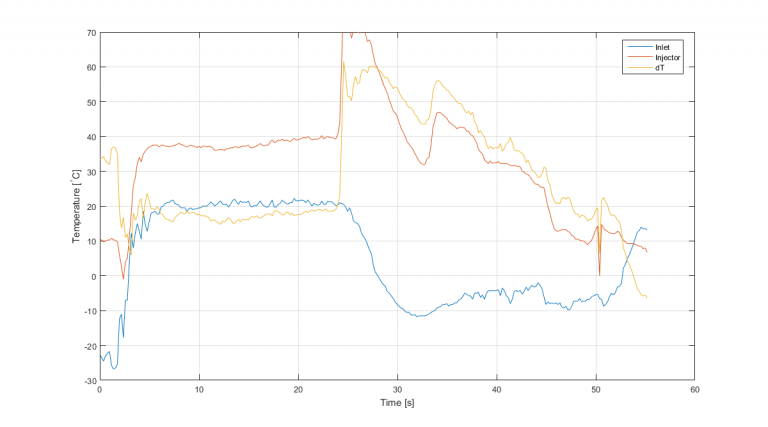 uel temperature at cooling mantle inlet and at the injector.

If you wonder why the fuel temperature starts at minus 20 degrees: this is because a couple of litres of fuel has been standing in the fuel pipe running past the LOX tank for the duration of the tanking procedure. The fuel/water mixture used will freeze at approximately minus 50 degrees.

The cause of the poor performance of the BPM-5 engine on Nexø I was the LOX having become so warm that in reality it was GOX being fed through the injector. But why had it become this warm? Let us have a look at the LOX tank pressure for the entire tanking procedure. 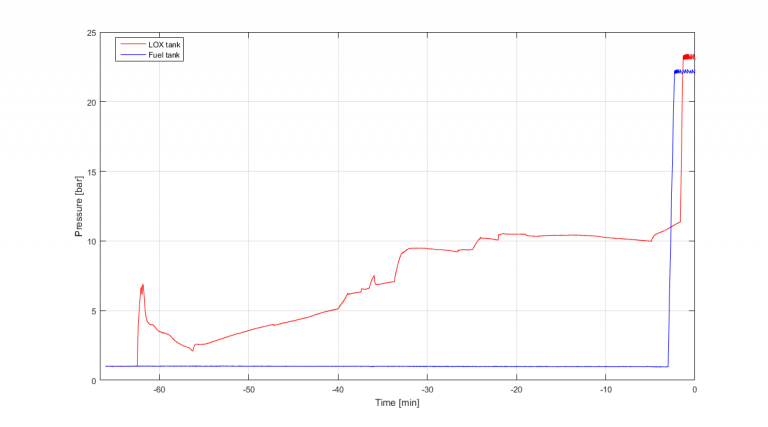 The pressure in the Nexø I tanks from start of tanking procedure until lift off.

Data shows that we have started tanking procedures approximately one hour before lift off. I’ll have to admit that I was a bit surprised when I first noted that. While at sea time was flying, I was convinced that considerably less time was elapsed, but data hardly lies. We start out with a rise in pressure up to 7 bar. This is caused by the tank being warm, and many liters of LOX is evaporated to GOX immediately after arriving in the tank. The pressure decreases as the tank is cooled and filled up. After approximately 6 minutes we have transferred enough LOX to warrant a hold to let the system stabilise and perform a weight check. At this point we make what will later prove to be an incredibly bad choice when we elect to close the vent valve at the top of the tank … as after the weight check it refuse to open correctly. From here on, only the pilot part of the valve is open, and the aperture of this is simply not large enough to bleed the pressure build-up. As shown, the pressure mainly rises from here.

From here on, the ball was in my court. The time was just around 4 PM, one hour from closure of the launch window for the day, which left us very little time to debug the situation. We tried to cycle the valve a couple of times and had hopes that it would unstick, but no, it was inexorably stuck. At this time I haven’t realised how large a performance loss the BPM-5 engine would suffer under these conditions, which is why I decided to carry on. Rune forced the pressure in the dewar on Sputnik up, to allow us to transfer the missing LOX amount to the Nexø I tank, and the crew on Sputnik was commanded to disembark the platform and move to a safe distance onboard the RIB vessels. 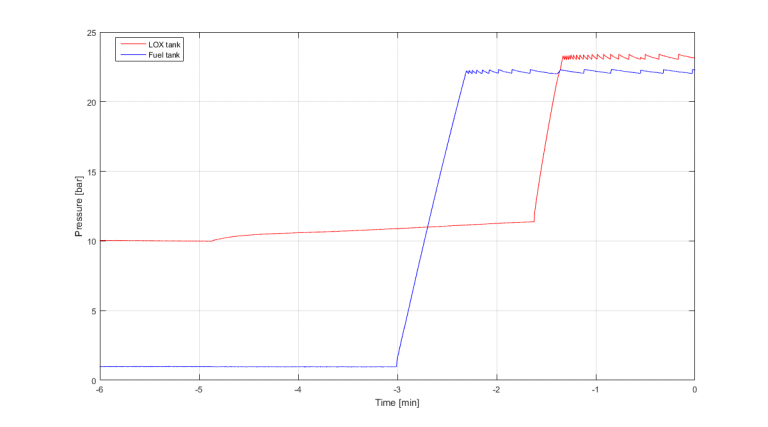 Tank pressure during the remaining 6 minutes before liftoff.

There are two large culprits here. First the vent valve on top of the LOX tank which suddenly refused to open correctly. We have an identical valve on the BPM5 test stand, used for more than 30 static motor tests without having experienced this fault … 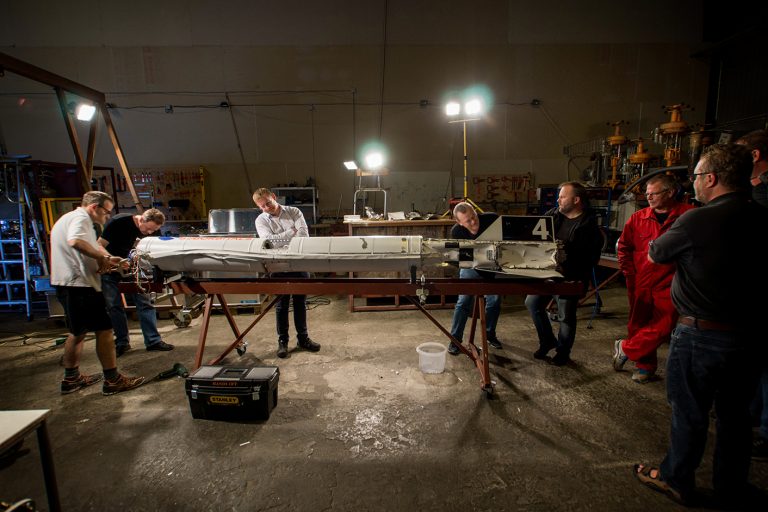 The failing valve has since been dismantled for inspection, but nothing unusual has been found. The valve casing is made from brass, which obtains a copper tone after being subjected to salt water. Visual inspection reveals that the valve remained sealed even after impacting the water at 530 km/h. The hypothesis is then that when the cold valve was commanded closed, a layer of ice was formed from condensating air on the slider in the valve cavity. A thin layer of ice can make the slider stick. We will have to solve this issue before launching Nexø II.

A look inside the valve cavity. Minute teflon tape flakes was found, but debris able to cause the malfunction was absent. Photo: Christian Ravn.

That Nexø I only reached a very modest altitude was of course rather aggravating. But the more I reflect upon it, the more I am convinced that going through with the launch was the right decision to make. Despite the modest altitude, we still learned a lot. Experiencing this fault with a Nexø rocket is preferable to experiencing it for the first time with a Spica rocket, where it simply cannot be allowed to happen. Rest assured that this valve problem will have our undivided attention from now on.

I started out writing that Nexø I ascended majestically above Sputnik, but have yet to exhibit an acceleration chart. Strictly speaking the measurement is G load data from the Nexø I IMU (Inertial Measurement Unit), which means the z-axis is along the rocket body. As Nexø I flew very close to vertical, the deviation from vertical acceleration is small. The graph is seen to peak at around 20 m/s^2, which corresponds to just 1 G. Onwards from T + 13 seconds to MECO (Main Engine Cut Off) the rocket manages to keep itself vertical despite a mere 0.2 G acceleration. Rather awesome … 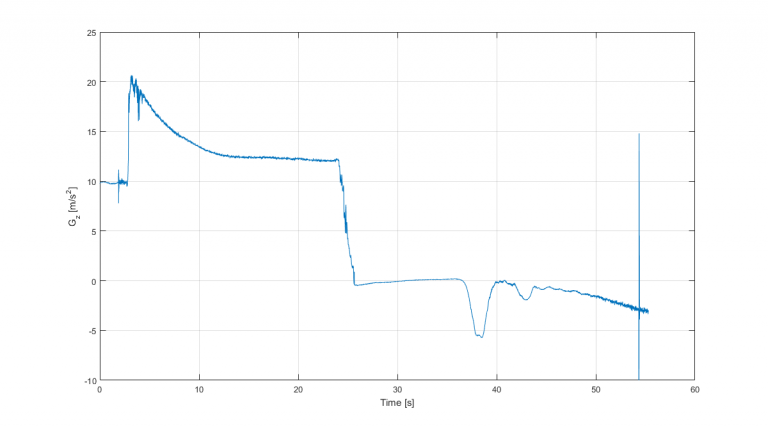