1050 km, 72 kg, 4.02 meters and a cross section of 0.25 x 0.25 meters could unmistakably sound like one of the smaller rockets in CS history. However, it’s the basis for one of the tools that will be used to fabricate the Spica rocket.

We have a major problem moving a large package of linear guides up through Germany and Denmark. We hope that our readers can help us find a solution, but first more about what we need the linear guides for.

A desire to reduce the time from design to manufacture, increase the flexibility of rocket manufacturing, and reduce the workload of the logistics department has long been one of our hot dreams. We are going to build a monster rocket and thus also require larger tools.

We might as well realize, that with a Spica size rocket, most of the parts become so big that it becomes a problem getting them transported, both on the road and in our workshop. Everything suddenly becomes very big! That’s what lies in “logistics problems” around large rockets. Therefore, the more parts of a Spica rocket we can build in the workshop, the better.

When the thought arose

Almost everything can be found on eBay, right from inflatable ducks in human size to more useful items. When a CS member brought his Chinese plasma cutter to the workshop, some ideas started flying. Could you attach this plasma cutter to an (oversized) 3-axis CNC board, so that sheet metal parts for Spica tanks, flanges, ribs, etc. could be cut easoly and quickly, in-house and without any logistics problems mentioned?

It didn’t get less exciting when an “industrial type” cutting head with an 8-meter hose, for the afore mentioned plasma cutter, could be purchased at a very modest price. Some quick CAD magic to outline the “industrial head” and then the ideas began to take shape. 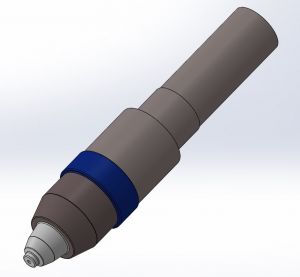 As a remark, it should be mentioned that Claus Mejling’s old motorized round table (for video and photo purposes), which has already been abused to weld BPM-5 engines (link) has also in the meantime shown good results in an experiment with plasma cutting holes in stainless steel tanks. 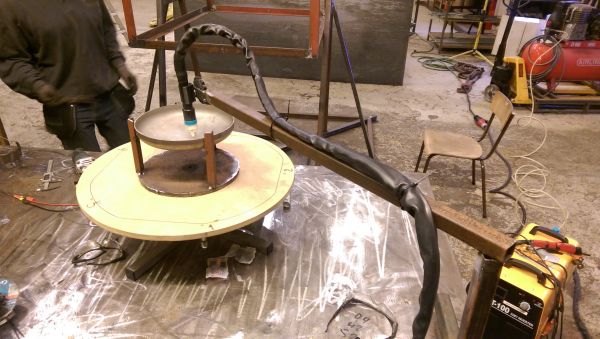 Mejlings round table and a little creative engineering, and suddenly you can try different concepts rather quickly. 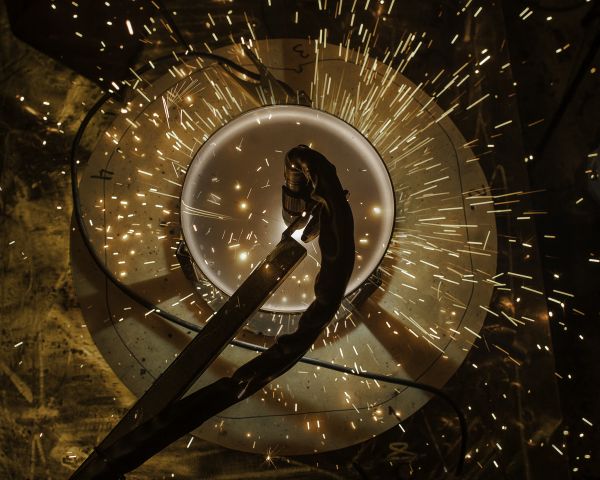 The faithful round table provides both nice BPM-5 welds and neat circular holes in the endcaps.

The specifications and the background

In order to cut sheet metal, which can be rolled into a Spica rocket propellant tank, the (slightly above average large) 3-axis CNC board should have a minimum size of 3.5 x 2.5 meters. The reason for these big dimensions are based on a simple consideration:

We only want to build a CNC plasma cutter in CS once, so we better make sure that it’s sufficient flexible and versatile for our current and future needs.

In order to cut sheet metal for 955 mm Spica rocket propellant tanks, it should (as a minimum) be able to handle standard 3000 mm x 1500 mm sheet metal plates. To ensure that the cutting machine is “future-proof” and the fact that we are still building a very large machine, we’ll take just one more step: The machine will almost be able to take 4000mm x 2000mm plates, limited by the maximum length of the linear guides. With a little creative handling, you can still cut these bigger plates, leaving the opportunity open for future rockets which are a bit bigger than a Spica.

We expect to be able to cut most of what we’re going to need in relation to the Spica production. With a 100A plasma cutter, the manufacturer states that the machine can cut steel and aluminum for up to 35 mm in thickness. This means flanges and other “solid” objects or parts.

We have begun – and have come a long way. Design has been completed for all practical purposes and the frame is almost done. 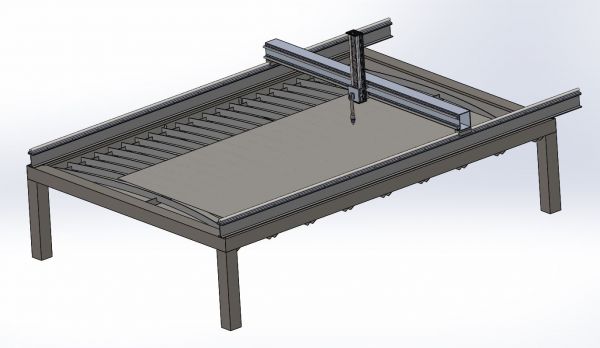 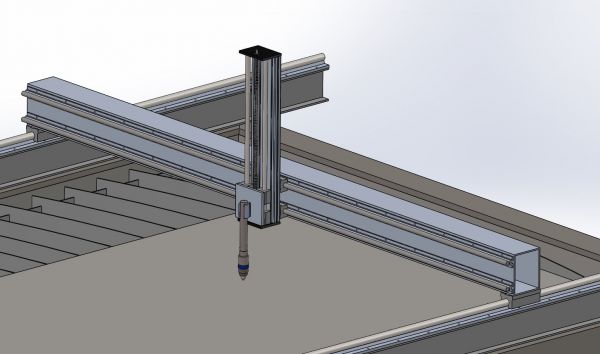 The Z-axis is a bit unconventional as it has a vertical movement of about 600 mm. The X-axis linear guides are 4000 mm long (the table only 3700 mm), which means that you can put the Y and Z-axes safely outside the plane, if heavy plates are to be loaded into the machine.

We want the possibility that the machine can be used for many different techniques and tools. Since we initially use a timing belt drive and not spindles (too expensive), we are limited to using only tools and techniques that do not require strong motors and rigid spindles. 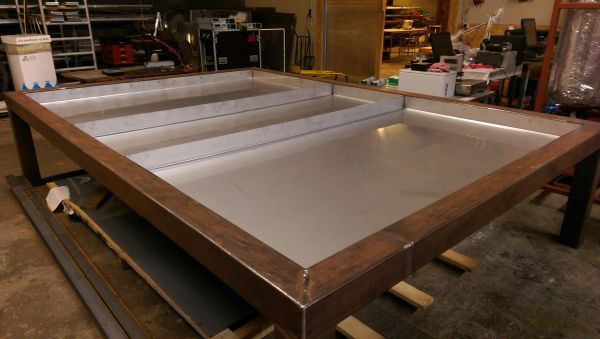 The bottom frame and the three water trays are already finished. It might even look fancy, when it receives a proper pain job.

Future potential for the CNC rig?

There are some additional manufacturing techniques, which do not substantial mechanical force. In addition to plasma cutting, such concepts could be foam milling (molds for Spica carbon fiber nosecone?), mock-ups in wood, laser marking/engraving using a smaller laser, etc. A well-adjusted CNC plasma cutter already leaves a decent cutting finish, but if powerful lasers one day becomes cheap, we might add laser cutting for an even nicer finish.

This rig has another trick up its sleeve. One might be able to descern that the Z-axis has around 600 mm of vertical movement, which is significantly more than the gap between the traverse and the cutting plane. The water trays and their supporting profiles can be removed from the machine so that the long Z-axis can be allowed to work in the space between the floor and the cutting plane.  The Z- axis is in any case designed as a universal tool holder. 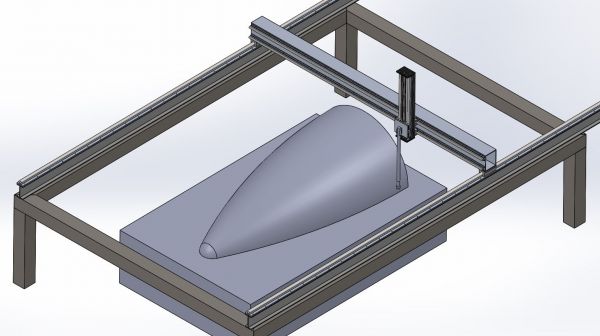 Since the long Z-axis can be used to utilize the space between the floor and the cutting plane, we have potentially a very large foam miller (or perhaps the biggest plastic 3D printer in the country, if a little creative?). Half Spica nose cone is used as an example.

An important component, the CNC control system, is really easy to find and ship from China without big problems. We initially chose to go with a 4-axis “starter kit”. It is sufficiently cheap and should still be enough for our initial rig. It’s a NEMA-23 stepper motor-based, with two motors on the X-axis, one on the Y-axis and one on the Z-axis. 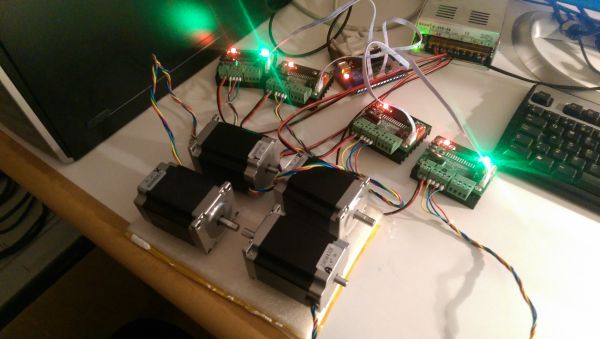 The cheap Chinese 4-axis CNC kit (and donated desktop PC) is already configured with all axes, so the initial “desktop tests” look promising.

Since money is always a critical factor for the things we build in CS, we’re always forced to think “simple and cheap.” We therefore use a donated desktop PC with a parallel port. It’s old-school, but it’s simple, cheap, proven and good enough for our purpose. As for software, we go for both Mach3 and LinuxCNC. 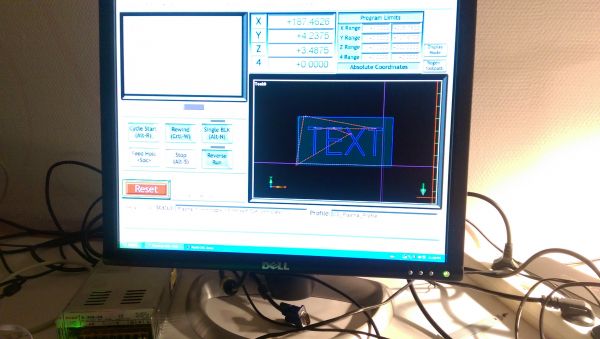 A demo version of Mach3 can run through enough lines of G-code to convince us that the concept is viable.

The whole purpose of building this CNC rig is that it will help CS move faster towards the target, which is a scary big Spica rocket and space capsule. To put things in perspective, I could not help putting a rough sketch of a Spica into the CNC design drawing. 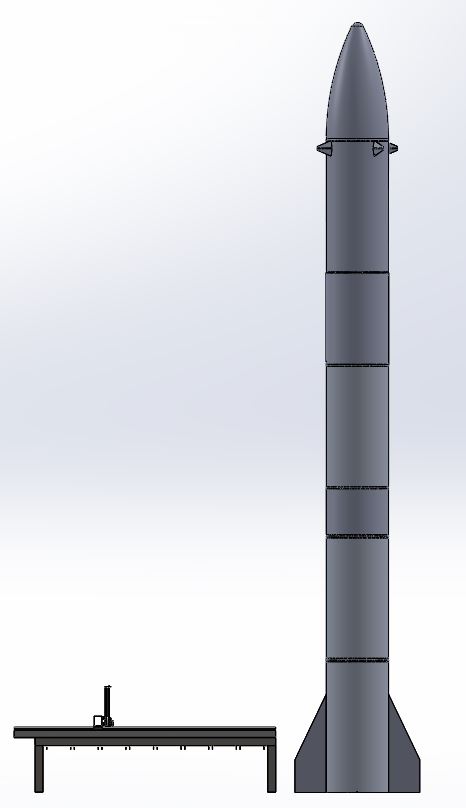 In profile: The “small” CNC plasma cutter (bottom left) can produce a lot of the structural elements of the impressive / scary big Spica rocket (early concept version). Try clicking on the image for a proper quality and a proper perspective.

Nexø II was quite large when we hung it up under the ceiling inside our workshop for a swing test of our active guidance system. So, it’s a thrilling feeling, knowing that Spica would not be able to fit under the roof (without having removing the entire nose cone and the space capsule). The nose cone and space capsule corresponds to the top two sections on the above illustration. 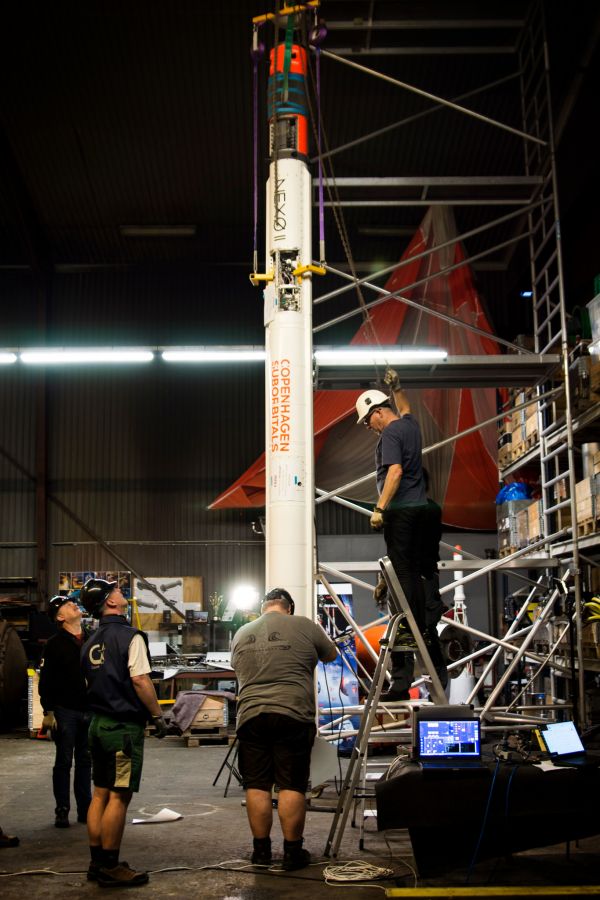 The Nexø Class Rockets. In a year’s time, we will all be looking back at the time when rockets were something you could move around by hand. Pure nostlgia, by the time we see Spica thundering towards the Kárman line, 100 kilometers above Earth.

It all went so well … and then!

We have attempted to realize the CNC plasma cutting project, with minimum financial impact to the rest of the organization’s ongoing rocket activities. Each penny spent in this project will have to be taken from one of the other Spica related activities in progress.

It has gone well so far with keeping the project on a low budget. The large square profiles for the frame were some which had been lying in stock for some time, so some rust had to be removed to restore a decent surface. The CNC kit and the plasma cutter are lent to us. Gears, screws, bolts and welding wire doesn’t cost that much either. A modest amount for the necessary steel and aluminum has been covered by CS. The remaining earmarked funding comes from a few private donors.

The only other thing that could blow the (nonexistent) budget is the linear guides for the three axes. Both home-made linear guides, as well as “top of the line” linear guides were considered and found either inadequate or too expensive. It proved to be a tough nut to crack, but after a long search a possible alternative solution was found at Dold Mekatronik in southern Germany.

An affordable solution with two TBS20 4-meter profiles, two TBS16 profiles at 3 meters length, and a ready-made Z-axis with spindle for an affordable sum of DKK 7500 was a pretty good bargin. We were even lucky enough to secure an extra earmarked donation from one of our faithful rocket supporters so that we could pay for the linear guides without using money from the normal budget. Win!

We negotiated price and all with Dold, after which a “surprise” struck. As soon as “packages” are over 3 meters of length, they apparently become “special goods”, which means that freight costs increase by more than a factor Pi. Bringing a box of 4.02-meters of length and a cross-section of 0.25 x 0.25 m, weighing 72 kilograms, containing the critical linear guides, 1050 km up through Germany and Denmark, would cost more than the sum of the parts making it up…

We clearly admit that we had not seen this coming! We have called several freight forwarders, but the answer is roughly the same every place we went: Too expensive for the available budget.

This is where we hoped that our readers might have some ideas for alternative solutions?

A lift? Do you know a freight forwarder who, for something like two boxes of soda, can take this either part or all of the way?

Swing by and pick up? Would you happen to come by “Freibad Steinach” on Schwimmbadstraße 12 or other spas in Schwarzwald in the near future, and “by chance” be able to bring along the package?

Do you know someone, who knows someone, who can act as a courier or an intermediate stop on the “Rocket-Stafet” through Germany, to Denmark, and onwards the Refshaleøen?

Last resort could be a few people spending a weekend og solving this logistica task, take turns driving, pick up the package and bring it home on the roof of a semi-economical station wagon. The puzzling thing is that, given the freight charges we have been given, it might be the more economically feasible solution, although we’d rather not go for that solution.

EDIT: At the time of publishing this English version of the original blog, two guys actually got into a car, drove nearly continuously for 31 hours, and brought back some really cool linear guide rails and other mechatronic parts.