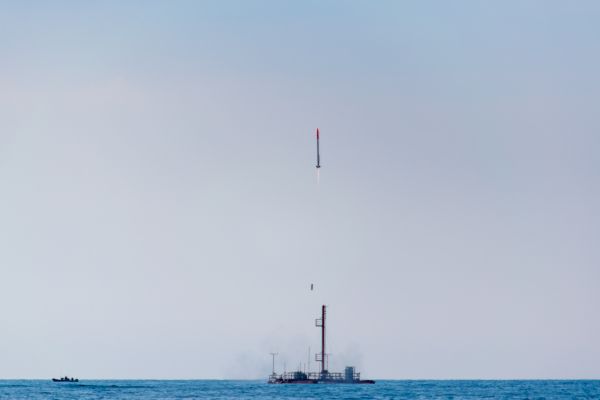 August 4th, 2018 was finally the day when Nexø II finally lifted off and majestically soared to the skies above launch platform Sputnik in the Baltic Sea. It was the culmination of several thousand working hours and apart from a lower than expected apogee, it was close to a flawless execution and flight. In this blog I will tell how I experienced last weekend and of course show a few graphs that will indicate why Nexø II did not reach its intended apogee.

A large part of the team arrived Thursday morning. The day was primarily used to establish us in Nexø and prepare for Friday’s significantly tighter program. 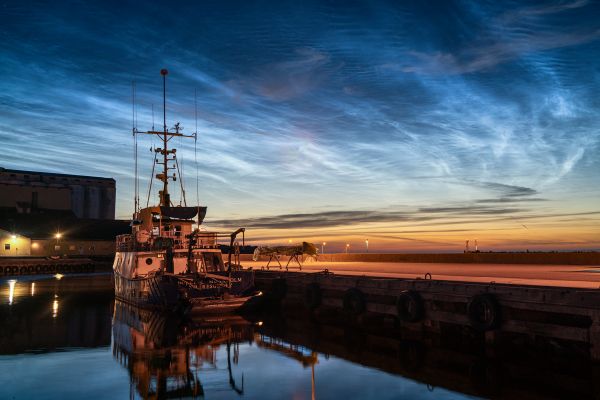 Nexø II stayed on the quayside next to Bolette Munkholm under spectacular noctilucent clouds over Spaceport Nexø. Photo: Sarunas Kazlauskas.

Friday morning the crew assembled for a quayside breakfast at 7:30. The program of the day was long, so we opted for an early  start. Around 9 o’clock the crane, which was supposed to lift LOX dewar and not least Nexø II aboard Sputnik, arrived. 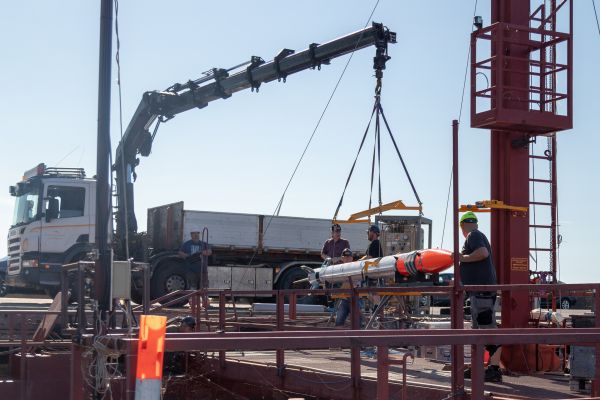 Nexø II is hoisted on board Sputnik. Photo: Mads Stenfatt.

Afterwards check out of all systems on Nexø II commenced, just as they are described in the checklist. All checks went fine and thus we could close group two of the checklist.  After that, it was time to move Nexø II to vertical and mount it on the launch rail. 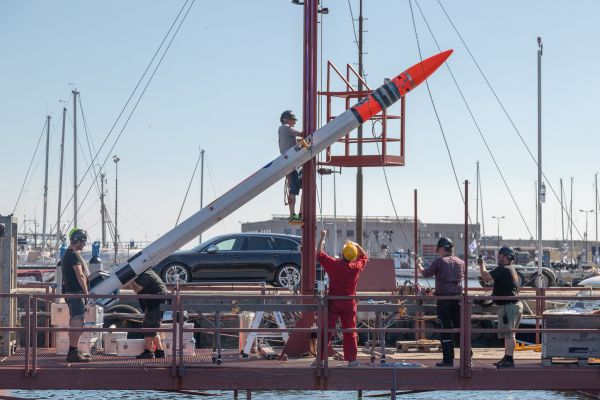 Nexø II on its way up and sit on its shine on Sputnik. Photo: Mads Stenfatt.

It was then time to attack group three in the checklist. It deals with further testing of the video transmitter as well as installation and testing of the jet vane section. The test of this is quite simple, Flemming manually commands the four jet vanes to move and we visually verify that they move in the correct order.

I am not quite sure where all the hours went on Friday afternoon. We completed the program without significant issues but surprisingly it was around 19:30 until we had finished the checklist. I had hoped that we would have a couple of hours to relax, but it should not be that way. At 20 o’clock we had the mandatory pre-launch briefing for everyone who would participate in the launch. Here we went over the overall plan and coordination between the different ships and aircraft and other practicalities.

Then crisis number one revealed itself.

At some point during the evening a fairly large ship had docked on the north side of the entrance to Nexø harbor. For most of the ships in Nexø harbor, that would not be a problem. But when one’s sailing launch platform is 12 meters wide, it seemed to be a pretty big problem to pass the port entrance. A diplomatic effort to make them move failed. Then, the CS Marine Department took over and decided simply to do a sail out test with Sputnik. Fortunately Sputnik could fit through but now it was getting pretty late, around 23. With scheduled departure at 2:00, it was pretty much last call to get some sleep.

Sputnik’s crew quickly went to the bed. On Sputnik, « go to bed » means that you roll out your sleeping back directly on the « elephant grates » of Sputniks deck and go to sleep right there.

Then came along crisis number two.

Okay, calling it a crisis is a bit exaggerated, but it was in any case a situation that had to be solved. Marine Department noted that the water level (general consumpiton water) on Bolette was dangerously low, significantly lower than expected. In view of having to spend 15-18 hours at sea and one toilet at Bolette to service all approx. 30 man at sea, then yes, we had to get water. Filling of water takes place at the other end of the harbor. Thus, at midnight we had to throw the moorings and move Bolette down at the other end of the harbor to refill water.

Unfortunately, at the end of the harbor there is a building that is just as tall enough to interfere with the data link between Bolette and Bornholmertårnet. Thus, Stream Team lost access to their server on Bolette and the opportunity to prepare things for the launch … So at 1 o’clock we just moved Bolette back to the north end of the harbor again… The last chance of some pre departure sleep for the Bolette crew had slipped away. 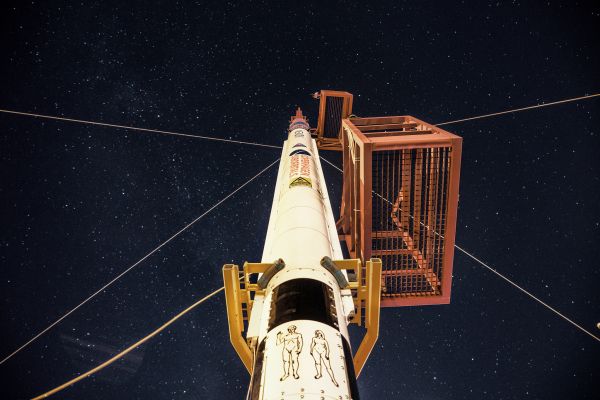 Around 2 o’clock, Sputnik slipped out of Spaceport Nexø and headed for ESD 139. Bolette Munkholm with Mission Control aboard was soon to follow. The smaller and faster boats waited until 6 o’clock to depart from Nexø. Personally, I found myself lucky enough to catch a few hours of sleep while we headed for the launch site. However, around 5:30 it was time to get up and get started. 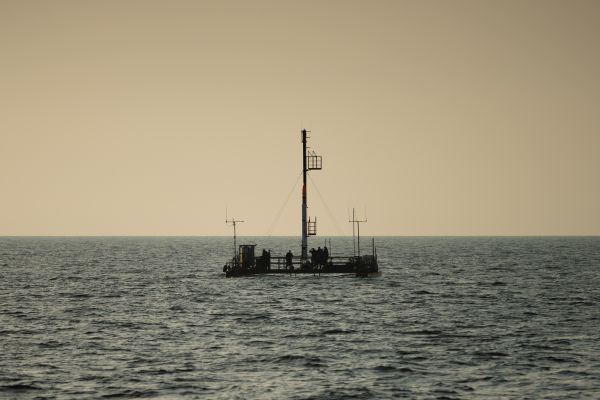 Sputnik shortly after sunrise in ESD 139.

Around 6 o’clock we were close to being in the right position and it became clear that we had a Polish fisherman in the area. As we were unable to contact him via radio, Emil and RSO Johansen were sent on diplomatic mission in « Little RIB ». Unfortunately, I do not possess Johansen’s narrative abilities, so I can not re-tell the story as it deserves to be told. In short, Johansen managed to convince the skipper on the fishing boat that they had to leave the area by moving just a few miles south.

Shortly after 7 we were ready to start the main part of the pre launch checklist. 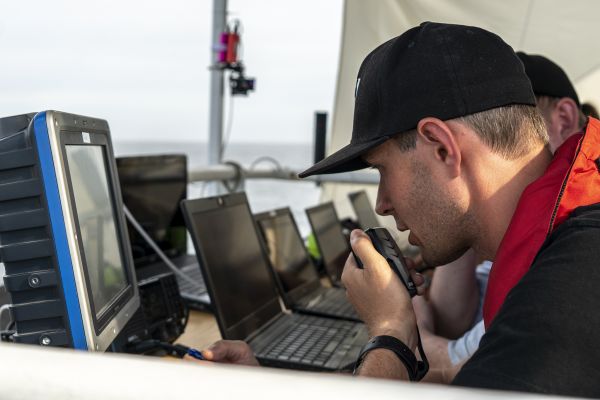 From then on everything went pretty smooth. We loaded fuel on the rocket while Johansen, his radar and plane secured for range safety. This early in the morning there was not a lot of activity in the area, so aside from the Polish fisherman there was actually no one we had to intercept and turn out of the shooting area.

Around 8:45 it was time to transfer LOX from the dewar and to Nexø II. It also meant that there were approx. 30 minutes for launch and I therefore asked RSO Johansen to contact Air Traffic Control Malmö to give them the 30 minute notice that they had asked for. They returned promptly and we had a slot from 9:15 to 10:15 to launch.

During LOX transfer we noticed an incoming ship on AIS. It was 2 miles out and approaching at 3 knots, thus the problem was  40 minutes out. As LOX transfer was almost completed we opted to speed things up and complete the launch before this vessel would be a problem. We swiftly completed LOX transfer and the entire PAD crew boarded the RIBs and headed to a safe distance. 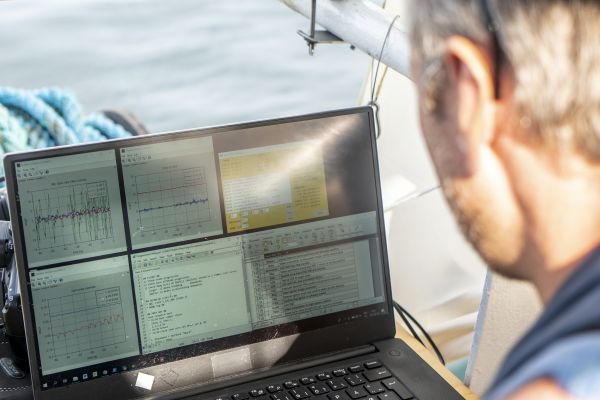 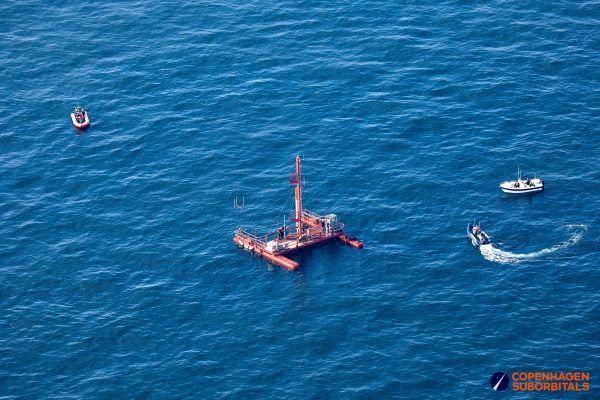 I then armed the Launch Control box and pressed Autosequence Start; « T-30 sec and counting ». Ffrom then on everything went automatically. The ventilation valve on the LOX tank closed at T-25 esc. At T-20 sec propellant tank pressurization started and at T-2 sec the ingiter fired. Two seconds later the main valves opened, the pressure in the engine exceeded the pre-stage condition and Nexø II’s engine went mainstage and lifted the rocket from Sputnik. It was a magnificent sight seeing Nexø II majestically rising toward the sky, slowly accelerating.

I quickly noticed from the incoming data that the pressure in the engine was lower than expected. It should be 15 bar but was only about 13.5 bar. Therefore, it did not come as a surprise that we only reached 6500 meters at apogee. In Mission Control we watched the live video from the rocket and could confirm the ballute had deployed correctly on the way down. As Nexø II fell below 3000 meters we could likewise confirm that the parachute had deployed and that the speed dropped to the expected approx. 10 m/s. 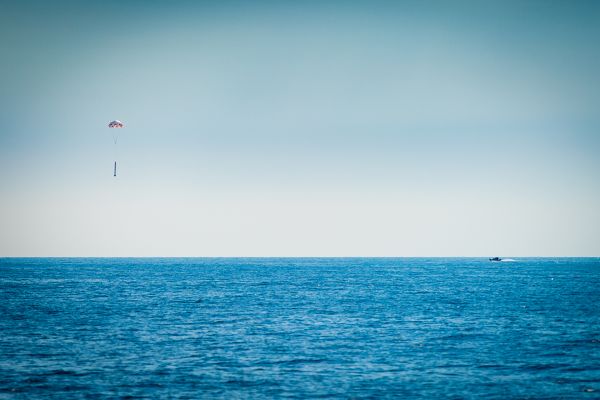 As the parachute unfolded we got visual contact with the rocket for the rest of its trip. It was therefore an easy matter for Blue RIB to reach the landing position where Flemming and Liselotte secured it by taking the parachute on board and thus Nexø II was on tow in its parachute line. 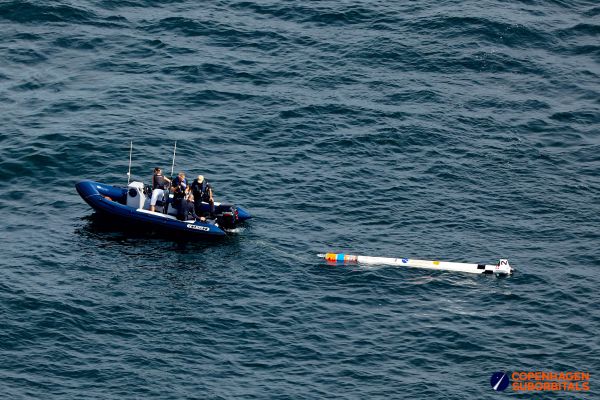 When Bolette arrived, we could simply lift Nexø II on board and put it in place in the prepared brackets on Bolette’s aft deck. 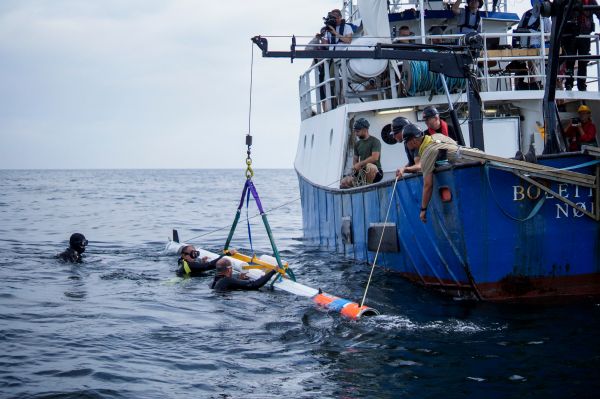 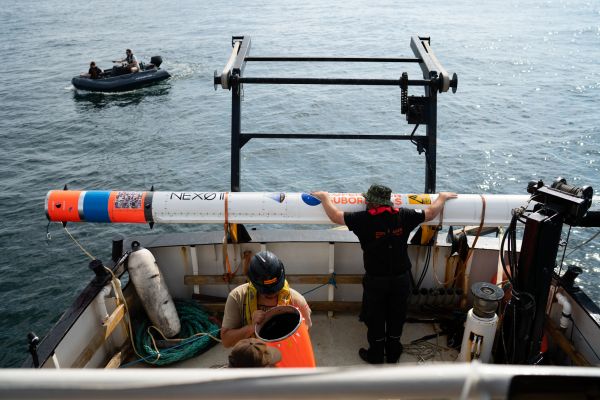 Together again! Nexø II gets a welcome back hug from Pad leader Jacob. Photo: Thomas Pedersen.

Thus, the mission was over and Nexø II is the most successful mission in CS history. Apart from the lower than expected apogee, all major systems on the rocket worked and from an operational point of view the entire mission went very well. It is the result of all the time we have spent on exercise and training, time that has been spent very well.

But what happened during the flight itself and why did Nexø II not reach the expected 12,000 meters but only 6,500 meters? Well, let’s take a look at some of the data Nexø II’s computers have logged. Let’s jump straight into it and look at the engine and tank pressures, seen in the big graph at the top right. 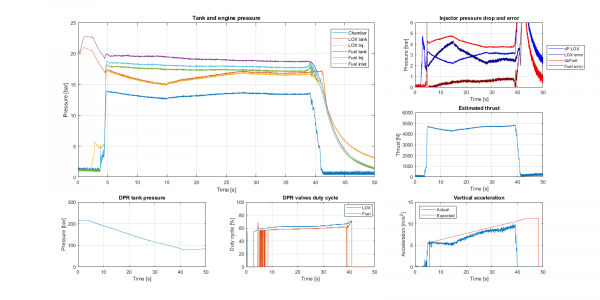 To get a bit closer to an answer, we have to look at the pressurization cycle that runs from T-25 and up to T0. 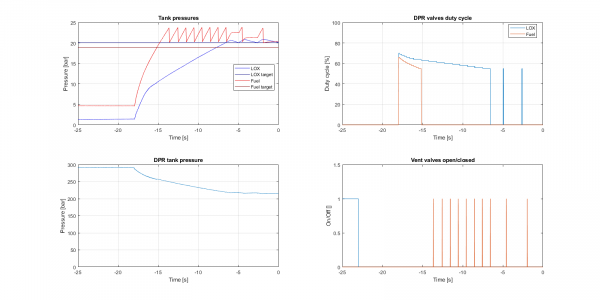 At the top left we can see the tank pressures. We see how the pressure cycle starts and the fuel tank is pressed in just 3 seconds. We see that the pressure increase in the LOX tank the first second is approx. as fast as the fuel tank, but then the curve breaks and the speed at which the pressure rises in the LOX tank drops significantly. Looking at the duty cycle for the valves, we see no drastic drop that can explain the rate change. It is therefore clear that around the T-18 something happens with the LOX tank pressurization. Either we have an error on its pressurization valve or we have a leak in the tank. However, it seems strange with such a leak, we have had the system up at working pressure previously without problems. However, for the time being it is difficult to determine more precisely.

When we get Nexø II home from Bornholm, we will thoroughly review the LOX side of the system for any leaks. If we can not find it, it points to an error on the pressurization valve.

In spite of the low altitude, we are quite pleased with the launch of Nexø II. Of course, an error somewhere in the pressurization of the LOX tank is critical but overall, the mission could not have been executed much better. So from all of us in CS we would like to thank you for the support, it’s the financial support from you all that enables our project. 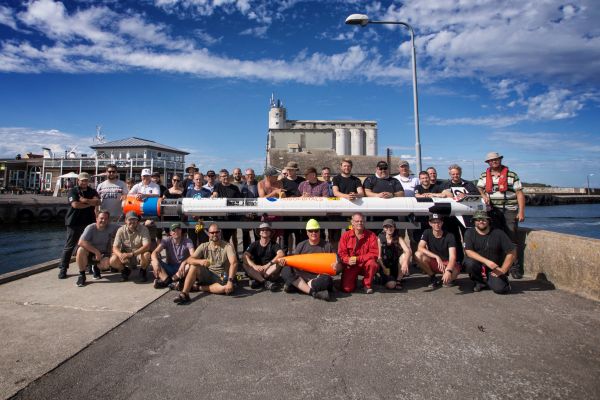