In Copenhagen Suborbitals something very, very big is brewing. Our Flight Director, Thomas Pedersen, has launched a very ambitious mission: To design and build the first BPM-100 rocket engine in 100 days! This engine class is the one that will fly on our manned Spica rocket, and is by far the most powerful ever build by amateurs. It’s thrust will equal that of a F-16 fighter jet in full afterburner, being able to lift the 10 tons rocket, space capsule and astronaut out to space. BPM-100 stands for “Bi-Propellant Motor 100 KiloNewton”. Newton is the international unit for force, which in rocketry force translates to thrust. It will essentially be a scaled up version of our proven BPM-5 rocket engine class, that flew on the Nexø I and Nexø II rockets. This will be the first element of the Spica rockets to be build, and a giant leap for us. To celebrate, our Creative Director, Jonas Linell, has designed the “BPM-100 in 100 days” mission patch , keeping in line with our proud patch tradition. We see the supersonic exhaust leaving the nozzle, forming shock diamonds in the exploding plume of ethanol and liquid oxygen. In the skies above, we see Spica, the brightest star of the Virgo constellation, which our future rocket is named after. Download the mission patch as wallpapers here >. 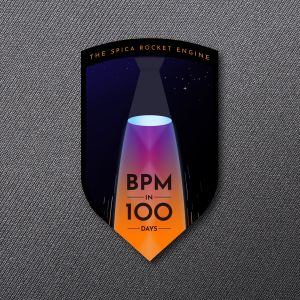 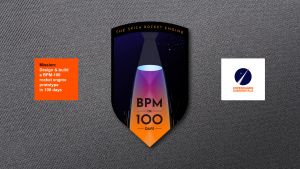 Things are getting real. Real fast.