As described in the latest blog, we performed five engine tests on Sunday October 10th. One of the goals of the tests was to determine whether we can use nitrogen as pressurising gas instead of helium. Economically it is very advantageous to use nitrogen rather than helium, as a bottle of helium containing 10,000 liters cost us 2,000 kroner (approx. 285 USD), whereas the same amount of nitrogen cost us 150 kroner (approx. 22 USD). With the upgraded tanks on the teststand an engine test consumes around 3,000 liters of gas, meaning that the use of nitrogen would bring a substantial cost reduction.

We did three tests in all to illuminate this issue. For all three tests we aimed at having the same amount of fuel and oxydizer in the tanks, and pressurising to the same pressure level.

Let us delve in the substantial data set represented by the graphs below. 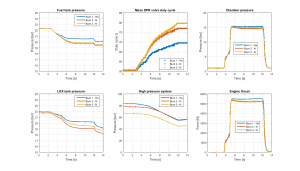 This means that using nitrogen, the tank pressures are between 3% and 5.4% below the pressures obtained using helium. Why is this so? The partial answer can be deducted from the top center graph. This graph shows the duty cycle of the DPR (Dynamic Pressure Regulation) valves. Both the LOX tank and the alcohol tank have a DPR valve, the graph shows the average of the two valves for the three tests, as plotting six graphs would be too confusing. It is clear to see that during the two tests using nitrogen, the two valves are opened to a much larger degree. This is to be anticipated, as nitrogen has a much larger ”viscosity” than helium.

For the time being, the DPR system on the teststand is implemented as a P-regulator, the regulator is thus without an integrating term. This means that we will always have an offset between the setpoint pressure and the actual pressure during an engine burn. As an experienced operator on the teststand, this offset is known from previous tests, and an estimated correction is incorporated when aiming for a specific chamber pressure. This is usually an adequate measure, but when the gas is changed to the more ”viscous” nitrogen, the offset changes because the valves operate at a different rate. More tests will result in better estimated corrections, but I would rather we upgraded the regulation algorithm in the DPR system.

We have focused on pressures, and so far left the engine performance out. It is trivial that if the tank pressures are reduced, then the chamber pressure will also be reduced, again causing a decrease in thrust performance. The two graphs on the right show exactly that. The chamber pressure is reduced by 4.3% for test #2 and by 2.7% for test #3 (an average from T+8 to T+10 seconds), and thrust is reduced by 5.5% for test #2 and 4% for test #3, all caused by the reduced pressure delivered by the DPR system.

Looking at the graph at bottom center, we see the high pressure system values. For all three tests the pressure was at around 175 bar before pressurisation was initiated. For test #3 the consumption was substantially larger than for the other tests, as the tank pressure was kept regulated during the five minute hold. Total gas consumption for the three tests are as follows:

The difference between test #1 and test #2 corresponds to the difference in feed pressure, whereas the consumption for test #3 is indicative for the amount of nitrogen needed, approx. 80 liters per minute, to keep the LOX tank at a constant pressure. This has not been determined previously, it is nice to have obtained a figure that we can relate to in the future.

In connection to the most recent blog, Jeppe from Danish Space Challenge asked a very relevant question: ”Were the capacitive measurements influenced by the different pressurisation gases used?” I have had opportunity to look into this in the meantime, and the short answer is: Yes, they were indeed. Let me illustrate with the graph below. 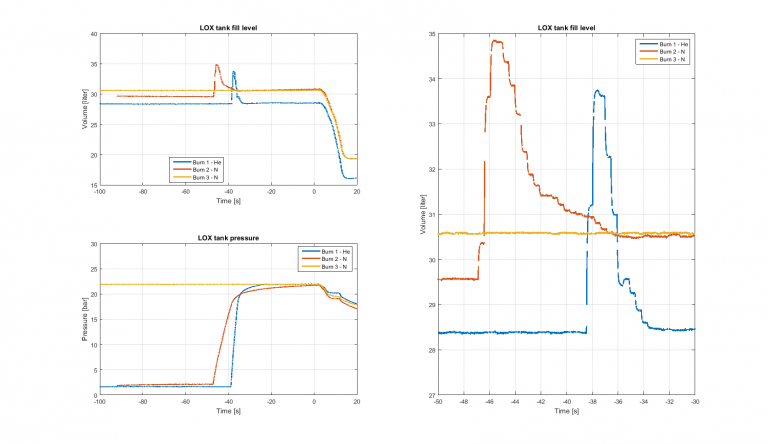 At top left we have the readout from the capacitive sensor, converted to liquid amount in liters, from T-100 seconds to T+20 seconds. Looking at test #1, the level is stable at 28.4 liters up until approx. T-40 seconds, where we observe a jump in the readout, see also the zoom on the right hand graph. This jump is caused by the initiation of tank pressurisation at this point, see pressurisation graph at the bottom. After a few seconds the level drops to 28.5 liters, essentially the same level as before.

Now looking at test #2, we start out at a level of 29.6 liters. After pressurisation the level readout is at 30.6 liters. Pressurised with nitrogen, the gas introduces a 1 liter positive offset. Is this really the case, or are we experiencing a measurement error? Does nitrogen have a dielectric constant much higher than 1 at 20 bar?

The graph for test #3 is flat, as this test was pressurised at around T-300 seconds.

The measurement offset is not an issue as such. We use the measurement solely for LOX loading purposes. As soon as the LOX tank is closed prior to pressurisation, the readout from the sensor is no longer relevant. But it would be nice to gain an understanding nonetheless.

While I was looking at the issue described above, I stumbled across another detail, which Scott was able to clear up straight away. Look at the graph below. It shows the LOX level measured during test #5, the 35 second long record burn. The graph looks strangely discrete. Scott was quick to explain (after consulting the manual) that the output update rate for the sensor is 0.5 Hz, and the data is also fed through a 50 Hz lowpass filter. Whan we are filling the tank this is not observed, and we would be able to measure with a 0.03 liter resolution. Because the LOX is boiling in the tank during filling, the resolution will be somewhat lower.

Is it misleading that the graph does not go below 11 liters, this readout is caused by the fact that the capacitive rod does not reach the bottom of the tank. The sensor is thus only able to measure the level when the tank is filled with more than 11 liters of fluid. 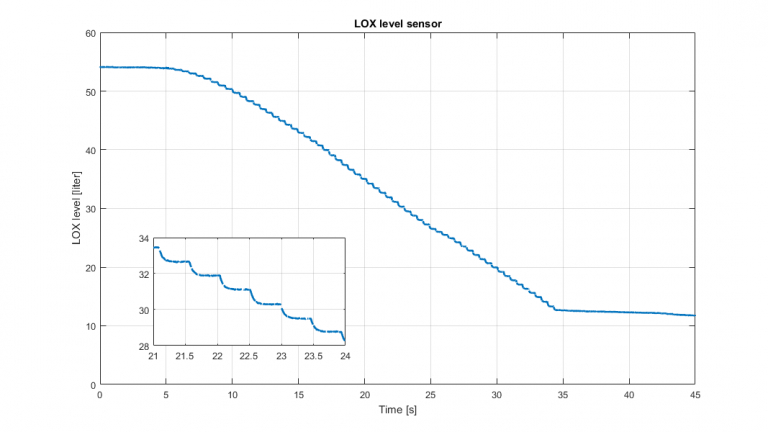 All of the above is indicating that we can indeed use nitrogen instead of helium for test purposes. Within the next month or so we will perform further tests with BPM2 to finalize the TEOS project. For these tests we will probably pressurise with helium, to ensure the best possible comparability to earlier datasets. I am really looking forward to having a look at the results from the TEOS experiments, which are an important driver in the design of BPM100. As soon as the BPM2/TEOS experiments are done, we can press on with the design of BPM100!

We are planning a static test firing in January. We have thought about using nitrogen in place of helium, mostly due to cost. Your tests have helped us make up our mind. Nitrogen looks doable.

Thanks and Good Luck on your efforts,

Hi:
Question:
1. How do the presence of nitrogen in the oxygen and alcohol tank affect the mass flow inside the engine?
2. What is the solusibitity (excuse spelling) of gaseous nitrogen in LOX?

The response of the DPR being different due to viscosity of He vs. N may also be compounded by the difference in the mass per unit of volume moving through the valve being greater for N2 vs. He. This mass should function to dampen the response of the valve.

Your study notes some difference in thrust using N2. My first thought ws that the N2 system is adding inert reaction mass to the exhaust products. If it is due to dissolved N2 in the oxidizer, and you are currently running the O:F ratio high in O, you could confirm this with test data that either leans out the fuel or increases O into the combustion chamber.

1) I think it is less than what we can measure, so we can’t really tell. The main reason for test 3 to be running at a lower pressure is the lower feed pressure simply because the DPR valves are not meant to work with “thick” nitrogen.

2) I have not found reliable info on that.

Did you consider dissolved N2 in the combustion? It would cause incomplete combustion and lower chamber temperature, but if e.g. compensated with higher flow rate the lost thrust may be compensated or even increased by the increased mass flow.

@Jens Stürup
N2 can dissolve into LOX at any ratio, depending on temperature, pressure and agitation. N2 has a lower boiling point than O2, but as the two liquids are soluble in each other it still dissolves at any pressure. At equilibrium the N2 concentration will be higher in the vapor, but N2 dissolving into the surfac of LOX will initially have higher concentration at the top and reaching equilibrium by diffusion takes longer than with agitation such as stirring.

You could use H2. I guess it would not ignite while there is LOX in the tank, but there might be a flash back once all the LOX runs out and H2/O2 mixture enters the combustion chamber. The gas speed might be high enough to prevent flashback through the injector nozzles until the LOX tank is sufficiently flushed with H2 to be non explosive/combustible, although there might be enough LOX wetting the walls to reinfuse the H2 with O2.

A torch like this https://nationaltorch.com/3h-hydrogenoxygen-hand-torch/ also doesn’t burn back through the nozzle if the gas speed is high enough.

I would suggest N is better then He for other reasons as well as cost and that the diffusion issue might have workarounds or even unrealized benefits that some engineering tweaking might help. I can only imagine from time to time ya all gather around with a few drinks and hash out some of the many options to extreme, both as an engineering excessive and also for a bit of fun. In that vein, I wonder if a bladder in the tank is an engineering option, thus separating the two fluids. I realize that He does not react with the reactants and cools down better than N But I have this nagging sense that He will have a tendency to introduce some unwanted H at some of the worst times, like during fueling, making for an unforeseen danger.

The bladder idea or diaphragm could certainly be an interesting solution. Also a n seal like a syringe plunger, without the plunger could work well, preventing mixing is another part of the positive, and might be sufficiently low enough in weight, be add some strength. If it fails at the tripple “0” rings and mixes, no harm in reality, but it is one way to guarantee pressure and mix quality., you could also break a main tank into sub tanks using them as sliding partitions rather than fixed bladders.

inflating oxidizer tank pressure variant by evaporation of oxygen by natural / forced heating – was it considered?
minus balon of helium, fittings, catalytic alcoholic heater, with exhaust into the fuel tank / atmosphere

It seems to me the afford should be on the tank and its delivery capacity because all things being equal the reduction in fuel will be offset by the pressure? So what saving that is generated will not be realized because you do not have a stable platform for dispensing the gas. And that is the difference in commercial application and profitability.