As Mads wrote in the previous blog, a part of our marine department has been busy replacing Vostok with Bolette Munkholm last week.

Operation “Change ship” started a couple of weeks ago with Rune traveling to Nørresundby, from where he helped Carsten from Nørresundby diving club to sail Bolette to Grenå. On the first part of the trip, through Limjorden to Hals, several members from the diving club came along for a final trip.

At the same time at Lautrupkaj in Copenhagen, we cleared Vostok for all we wanted to keep, and which wasn’t needed on the trip. The items were temporarily stored on board Sputnik. Scott, Johansen and I then sailed Vostok to Margreteholm harbor where we were received by the other crew members, Jop and Carsten. We fueled for the trip and picked up some parts that was needed for trip.

In the evening around eleven o’clock the good ship Vostok left Copenhagen for the last time on course towards Grenå. We sailed with three shifts whom either slept or sailed the ship. The weather was really on our side. The water was quite calm, there was a clear view and a very nice starry sky over Kattegat. A little after seven friday morning Vostok docked in Grenå harbor in front of Bolette, which had arrived a few hours before. 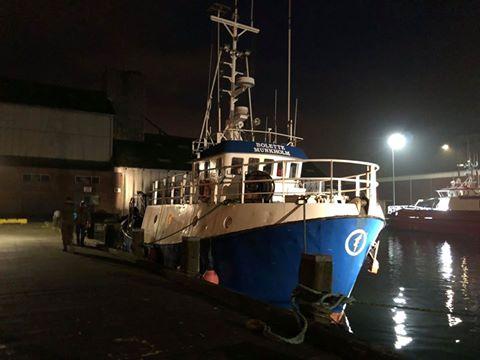 After a solid breakfast and a tour of Bolette, we started to dismantle and move the last things we needed from Vostok. Everything was stowed in the aft cargo compartment and is something we should get sorted in the time to come. Carsten from the diving club introduced us to the controls of our new ship, and after fueling we parted with the good ship Vostok and set the course for Copenhagen with Bolette Munkholm. It was with mixed feelings that we left Vostok. She was a lovely ship to sail and we have had many good hours on board, but she has also been a challenge with a lot of major repairs over the years. Although Vostok has served us well in the five years she has been a part of Copenhagen Suborbitals, we must admit that she never became the ideal mission control ship for us. 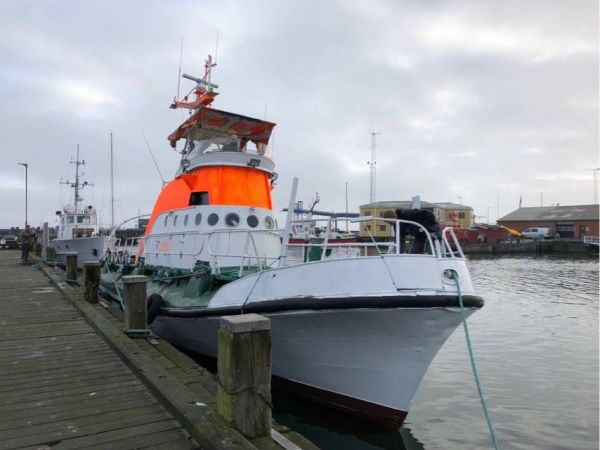 On the trip home, the weather was also good, with calm water and almost no wind. However, it was a bit dull and there was a couple of rain showers during the trip. Unfortunately, our probably most experienced seaman André, could not participate in the whole trip. Instead he went to Gilleleje to meet us and joined us for the final part of the trip. We therefore docked in Gilleleje harbor to take him aboard.

The last part of the trip, past Kronborg and down through Øresund, was as peaceful and fun as the first part. Apart from the ferries at Helsingør, there were hardly any other ships on the water. At three o’clock we sailed into the harbor at Svanemølleværket. Carsten from the diving club docked Bolette Munkholm at her new home on Lautrupkaj.

Bolette Munkholm is in many ways a perfect match for us. In the former cargo bay, cabins with bunks are arranged for a crew of fourteen. When we are on a launch trip, most of the team can stay on board, rather than sleeping on the floor in the local football club, which we previously have had the pleasure of doing. There is a working galley and mess on board, so the catering can be improved a lot. Behind the wheelhouse is a nice big sun deck, with a good view of the aft ship and the surrounding water. This will work perfectly as Mission control for our coming launches. However, a sunshade or something that can take the worst glare in the computer screens is needed.

On the large aft deck there are both a crane and capstans to collect the rocket when it has safely landed below the parachutes. There’s also enough space for the tracking antenna either on the aft deck or the foredeck. The aft deck is also placed so low and has a side opening so that transfer of personnel to and from the RIB boats will be easier. All in all, a nice ship which is much better suited than Vostok and which we hopefully will enjoy, for many years to come.

Over the next few months we will get to know her systems, and not least get her ready to be our mission control ship for the launch of Nexø II, this summer.

The only thing we need for the ship to finally become ours, is to get the last part of the financing in place. A fund application has been submitted, and we expect a response in late February. We’ll keep our fingers crossed!

Watch the Nexø II mission from ESD139 in the Baltic Sea.