Dear readers,
A week ago we performed a test of our space capsule scale model at Copenhagen Air Experience’s wind tunnel facility.
Let me start with showing you how we ended the day.

Which shows that the headline is telling the truth. Fortunately we expected this experiment to have a high probability of failure, which is why we placed it last in the test plan for the day.

The primary goal of the scale model tests was to determine how to obtain the best stability of the capsule while suspended under the ballute. The secondary goal was to determine the behaviour of the capsule, either without the stabilising ballute, or with only a miniscule drag, above the capsule. For this we had prepared the scale model with four suspension points, to enable us to test several different configurations. 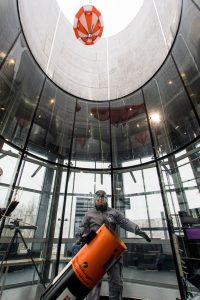 This conclusion also sits well with the parachute group. It fits our presumption about which configuration will result in the softest landing. This presumption will be put to the test shortly when we perform a landing test in a public swimmingpool – as soon as we have built a new scale model, that is. Single point suspension is, from my point of view, also advantageous, because fewer failure modes will have to be addressed regarding ballute detatchment and main parachute deployment. Additionally the increased surface area will lead to increased drag at an earlier time during the descent, meaning shedding descent velocity at an earlier phase of the return flight.

This configuration also have a disadvantage. A three point suspension configuration will require heat protection only on the bottom of the capsule. Using a configuration resulting in a tilted capsule attitude, a much larger area will have to be protected.

This is one of the classic challenges in this business – everything is a compromise. What is advantageous for one department will be a disadvantage for another department. But we are now much wiser about the preferred configuration for attaching the ballute to the capsule.

What happens if the ballute decides to tear itself to shreds, or otherwise reduces its drag to a fraction of the design value? A very small parachute had been prepared to emulate a fault scenario with a miniscule drag above the capsule. It soon became evident that this is an unwanted scenario. The very small drag, together with the chosen fin configuration, made the capsule assume an unstable horisontal attitude, without any apparent uprighting effect caused by the fins and the tiny parachute.

There’s certainly room for improvement here before the first capsule is launched.

Flight without a ballute

What happens if the ballute fails to deploy when expected? As a last test we wanted to determine how the capsule will behave, should the ballute malfunction or detach prematurely. This means that the last test would be the capsule model flying solo in the wind tunnel, without any drag device attached. The result from the previous test made us wary, and we quickly retreated from the wind tunnel as soon as the capsule model held a vertical attitude. The wind speed was slowly increased, and for a long time the capsule seemed able to remain stable. But as soon as the wind speed equalled the terminal descend velocity for the model, the model lost contact to the wire grid on which it was resting. A small deflection made it fall on its side and then shoot up to the tunnel ceiling. As the huge fans was brought down to zero power the capsule spiralled down to the wire grid in several pieces, smashed, done with, destroyed. 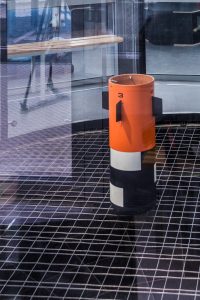 The capsule seconds before it was smashed

Larger fins are now found desirable for attaining stable descent without ballute. And then the experiments may go into a loop, as larger fins may make three point suspension a stable configuration.

Another of the days goals was to obtain more precise measurements of the drag coefficients for the Nexø ballutes.
Last time we measured drag coeficients, we had one person doing a reading on the display of load cell placed between the bottom attach point and the ballute line, while another person did a reading on a handheld anemometer. The two readings, which were very jumpy, had to be done simuntaneously, and then noted down. 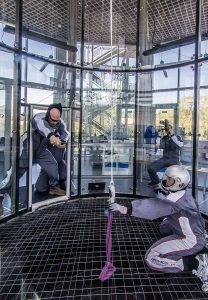 Apart from being VERY cumbersome, it also introduced measurement uncertainties on the drag value, as the person reading the load cell caused turbulence in the air, thus reducing the drag. 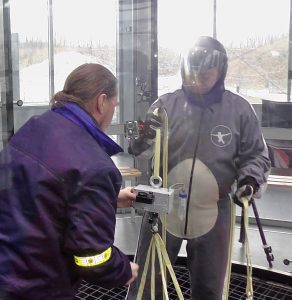 For this test we used a new combined instrument for measuring drag and wind speed, designed by intern Thomas Giraud-Saveur, and the new instrument is a great improvement. Not only did we get more precise measurements, we also obtained them much faster than earlier. We really appreciate Thomas’ work. 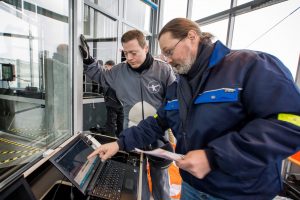 Loadcell and anemometer data is being evaluated. Photo: Carsten Olsen

As seen on the graph below, the new measurement technique enabled us to obtain drag and wind speed in a continuous process, contrary to the earlier method, where only certain wind speeds were measured.

We want to be prepared

After we completed the tests, TV2 Bornholm asked us why we, not having succesfully launched a rocket to space yet, perform these tests. Although the answer may seem obvious – especially in this forum – the question is based on good thinking. As I told them, we perform the tests to be prepared when we reach space. Not without reason, there’s a saying stating that the more you prepare, the luckier you are.

A longer feature showing what TV2 Bornholm experienced during the day is here.

Had we neglected doing these tests in the wind tunnel, and just chosen the configuration we assumed to be the best one before we did this test, we would probably be in for a nasty and costly surprise. This is exactly why we try to be systematic in our approach to space travel, instead of just knocking some sheet metal into an approximate shape, call it a space capsule, launch it, and see what then happens to it. Launch windows are a scarce resource, which has to be utilised in the best way possible. If we didn’t do our utmost to weed out as many faults as possible before we launch the rocket, we would, in my opinion, show disrespect toward our supporters. This of course pertains to all systems, why it is a huge advantage that we are so many who have each our focus area for development and test.

First preliminary edit by Carsten Olsen. More about the exiting day is forthcoming…

I am always happy when I can inform about a new sponsorship, and once again directly related to my department. Following a good dialogue with the team at denbigharmysurplus.co.uk we have been offered a brand new parachute which is a far better match to the expectations we have for the parachute system that will be used for the manned capsule.
Previously I have described the round C9 parachutes we have been using so far, chosen for economic reasons, and that we will be looking at other options when we reach a more serious level. 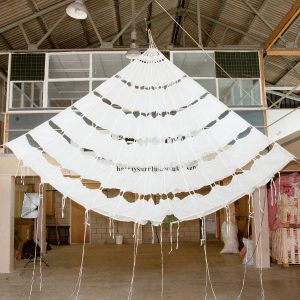 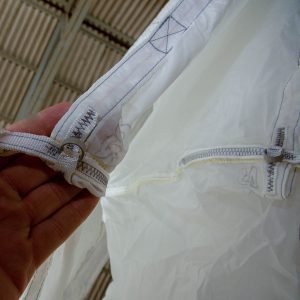 The parachute is prepared for reefing. Photo: denbigharmysurplus.co.uk

A nice thing about the parachute that denbigharmysurplus.co.uk have offered us is the fact that it comes with rings for a reefing line already mounted at the periphery of the canopy. This enables us to use our preferred method for making the opening of the canopy more benign for both canopy, space capsule, and astronaut.
We hope to test the new parachute at Center Jump parachute club, to determine how much reefing it will make sense to apply to this type of canopy. The amount of reefing applied is a design choice, based on how hard we want to apply the brakes.

And this brings us to the end, where we would like to, once again, thank the companies and persons who support us. 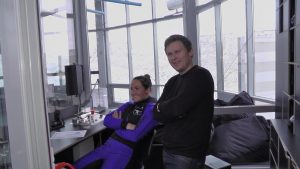 Copenhagen Air experience has once again contributed greatly towards reaching our goal of manned amateur space flight. A big thank you is also due to Cotter, who sponsored the laser cutting of the fabric for the ballute keeping the scale model aloft.

Thank you very much.

Have you thought about replacing the fins and instead using active panels the way that Spacex does on the falcon
9 first stage to guide during reentry?