Since the preparations for the launch of Nexø I at the end of 2015, we’ve known that Vostok was facing a major renovation. Since we acquired her in 2013, major repairs have been made to the engine and the electrical system, including a total renovation of the main engine turbochargers. When a boat reaches a certain age the risk of problems normally increases, and Vostok is no different.

She simply requires too much maintenance, compared to the amount of manpower and money we have in CS, and therefore we have decided to sell Vostok, and replace her with another and more suitable ship. Even though CS builds rockets, we won’t launch any rockets without a mission control and recovery ship.

Vostok was originally named “Günther Kuchenbecker” and was built in 1969 at Abeking & Rasmussen in Lemwerder, as one of four in the same class in a series of rescue vessels for the German rescue service (DGzRS). She was built completely in aluminum, with cooling boxes and tanks between the ribs and was originally packed with a 610 kW main engine, auxiliary motor, dynamo and hydraulic station. 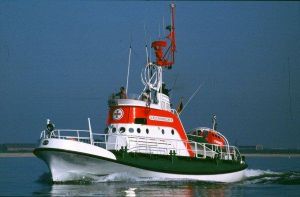 Vostok aka “Günther Kuchenbecker” in her days of prosperity close to Maasholm in July 1982. (Photo: Wikipedia)

The main and auxiliary engine were both connected to the main drive shaft. In addition to being able to be engaged in a situation where the main engine sets out, the auxiliary engine can be used for harbor maneuvers, as the ship simply sails too fast when using the main engine, even at idle speed. Vostok is built as a rescue vessel. This means that there is limited space for crew, there is limited stowage space, and all systems are either double or triple redundant. As mentioned, the cooling system of the engine is designed as cooling boxes located in the hull between the ribs.

It’s a very clever construction when building a streamlined ship with high cooling capacity – but it’s a system that is extremely difficult to maintain, and repair if an error occur – which we realized just before the launch in 2016.

When Vostok was acquired, it was primarily because of her seaworthiness, as well as the opportunity to recover a spacecraft on the aft deck, in the cradle that was originally intended for a smaller vessel, that Vostok originally was equipped with.

Vostok has served us well, but even since the launch of Sapphire in 2013, we have known that the need for space, electronics and other equipment was far greater than expected. We have also had major problems with cooling our servers for streaming and data collection, as some may remember. The only place there’s room for servers, is in the ship’s cargo space, just below the aft deck, and there the temperature is rapidly above 40 degrees when the sun is on the deck. As we move towards larger rockets, the need for crew and equipment will be even bigger, so we’re in a situation where Vostok can no longer support our needs in the best possible way. 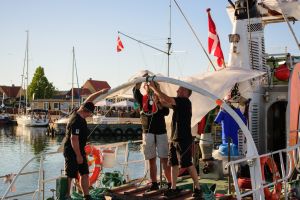 Prior to the launch of Nexø I in 2016, we had to set up an interim sunroof to create a little shade on the aft deck over the cargo compartment. Nevertheless, it became so hot that our streaming servers had to be restarted several times. (Photo: Martin H Petersen, CS)

This summer we had Vostok on the slipway in Nexø harbor to change the anodes, and give her a coat of paint. It was revealed that there were also corrosions in the bottom of the ship. Vostok got fresh anodes and a whole new round of paint. 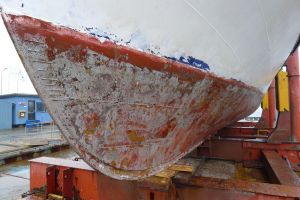 Thorough cleansing of the bottom of Vostok in the summer of 2017. (Photo: Kristian Elof Sørensen/CS 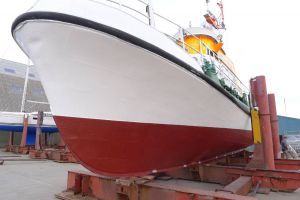 Vostok in the summer of 2017 after a thorough paint and maintenance job. (Photo: Kristian Elof Sørensen/CS)

Originally it was planned that Vostok would complete the Nexø II launch as its final mission, but due to the postponement of the launch we’ve changed that. During the autumn we have explored the market, both for purchase and sale. We have spoken to a German rescue museum who have previously shown interest in the ship and various other potential buyers.

The German museum already has two of the four boats built, and it has proven difficult to find buyers for such a specialized ship, so Vostok was sold to a ship collector in Jutland. We made the final payment of the ship in 2015, with a portion of the income from our educational activities, so the sales price can be used directly to finance part of the new ship.

But what do we do in the future?

The replacement for Vostok has already been found! Over the years, the marine and electronics department has written long wish lists on what one might wish for if we could find another ship. Some of these are:

All of these features are just not found on any commercially-built ships. Especially not on a ship below the 14 meter overall length. This is important so that it can be sailed without a specific certificate. But we succeeded!

We became aware of the dive ship “Bolette Munkholm” (from now on BM) in our search for an alternative rejection vessel for the planned launch in 2017. BM is owned by “Nørresundby Sporstdykkerklub” and they already offered that BM could act as a support ship back in July, because her radar is placed reasonably high. Due to well known circumstances we never needed that opportunity, but afterwards we have been in close dialogue with the diving club who want to sell the ship.

After visiting Nørresundby for inspection of the ship, and after long consideration, we have made a deal with the diving club that BM has been made available for CS for the year 2018. This gives us a whole year to get the final financing in place. And this means we’ve secured a ship fully equipped, including radar, for the launch of Nexø II this summer. We have a fund application in preparation and have our fingers crossed for the application to go through, because BM is in many ways the best ship we could wish for. 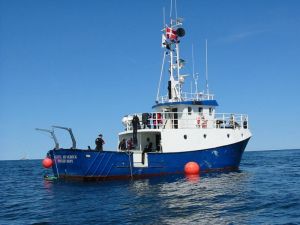 BM is an old renovated boom trawler, which has been converted to function as a diving ship, with a crew of 14. She is shorter, but wider than Vostok, has a taller antenna mast and is designed with pulling power in mind. There is a crane on the deck, and a davit for a small speedboat, for sailing with divers, or for moving crew between control ship and launch platform. She is fully equipped with compressor systems with air mixers – which can be directly used for pressurizing tanks on the sea, and there is plenty of space to fit a “server room” with a refrigeration system. The list of benefits is much longer than that – but we’ll save it for later. Until then you can see more specs and pictures here:

So on Thursday January 18th 2018, Vostok made her final journey for CS.

Despite many problems and challenges, she has served us well. One of the people who sailed her wrote to me: “It is a bittersweet farewell. What will all the technicians now spend their time on?  An invincible battle has been fought in the machine room and on the electric front. Bravo!”

I know there are many waiting to hear what happens with the rockets. As you know, the capsule group is busy doing a lot of calculations. We are calculating the mass budget for the payload we end up launching – and here the work of the capsule group is crucial. We need a better estimate on how much the capsule will weigh. I can already reveal that we may need a little more than 100KN of thrust – but that’s not necessarily bad news 🙂

A test stand for injector qualification is also in the planning, and we expect to begin construction of the next generation test stand for a 100KN+ engine soon.

As always, time is our biggest challenge, and we can use more hands in CS. We need people in the marine department, mechanical engineering, CAD, electronics etc. Send us an email if you want to join – the only requirement is that you know your stuff and can be at the workshop in Copenhagen once or twice a week.