It has been a busy December in the Department of Slowly Falling Things.

Just before Christmas, I was in Holland, invited by DARE , to test different items in a wind tunnel, and on 28th of December, we finally managed to test our system of 3 full-size parachutes. 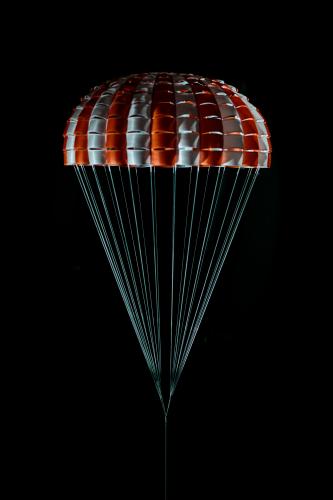 This blog will cover the trip to Holland, and later I will write about the first trials of its kind in Denmark with 3 parachutes to be unfolded at once.

You can read more about the wind tunnel itself here: Open Jet Facility

In our setup a rig was made close to the mouth of the wind tunnel, where the students had made a clever setup so that you could easily change the container, depending on the size of the parachute to be tested.

Below: The rig that made up the measurement setup in the wind tunnel at TU Delft. 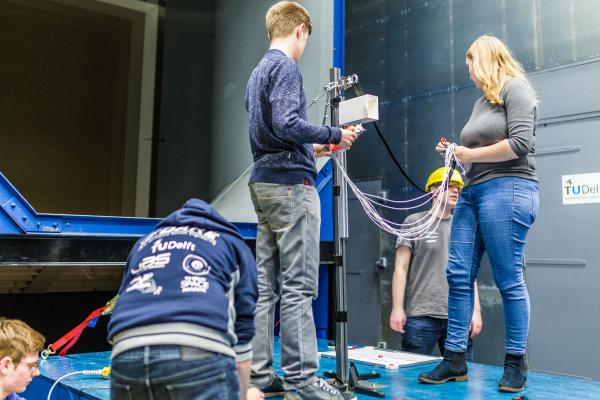 A load cell was mounted on the rig. It was connected to a laptop that was placed outside the wind.

I had beforehand made a long prioritized wish list, unaware of how much it would be possible to get done. Thanks to their clever setup, one test could run while the next one was prepared. It was efficient and time saving. The result was that I got all my wishes and then some.

Basically, I had prioritized to test two things:

Next I had a few other interests I wanted to cover:

Especially the last item was interesting to me, for reasons of redundancy and production challenges.

Testing the main parachutes would prove interesting, as they were in principle too big to be in the sweet spot of the airflow. This is something I need to take in to consideration when looking at the results. The parachutes probably haven’t been 100% in the airflow. 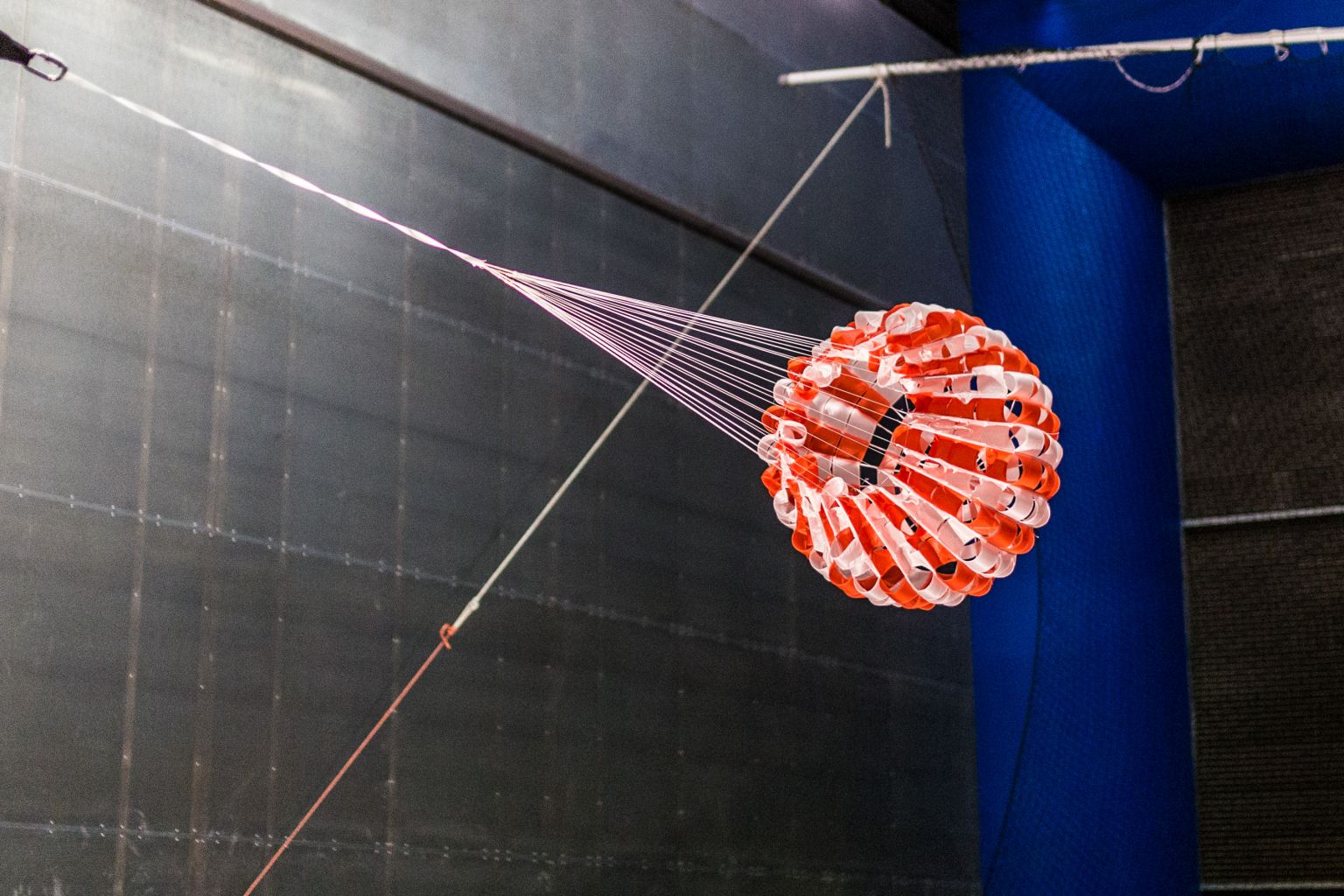 This was the first test we did in the tunnel, where we used the improvised “manual” reefing system, a very strong sewing thread. Beforehand I had made some markings on the sewing thread. Then it was just a matter of binding the sewing thread at these points to reach different amount of opening. 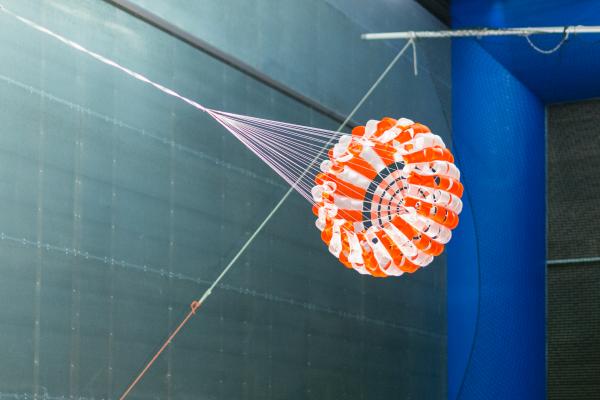 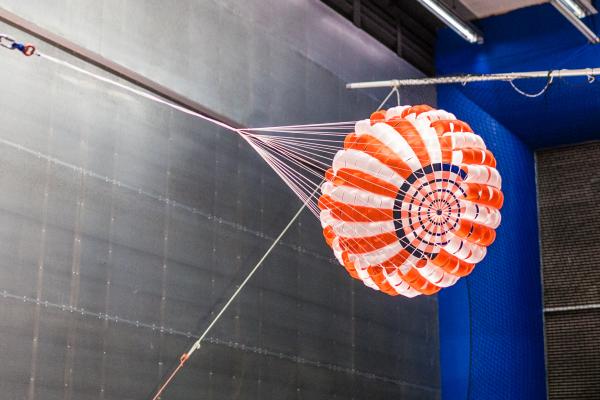 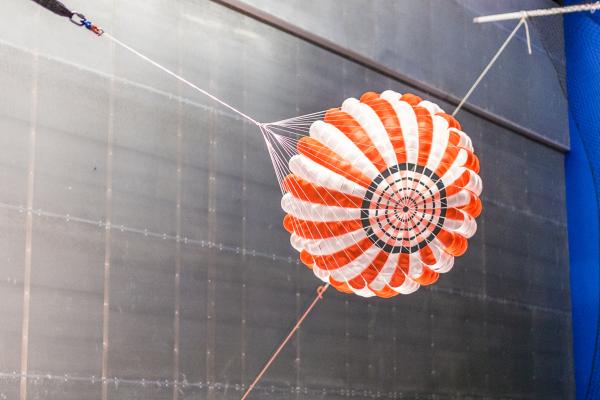 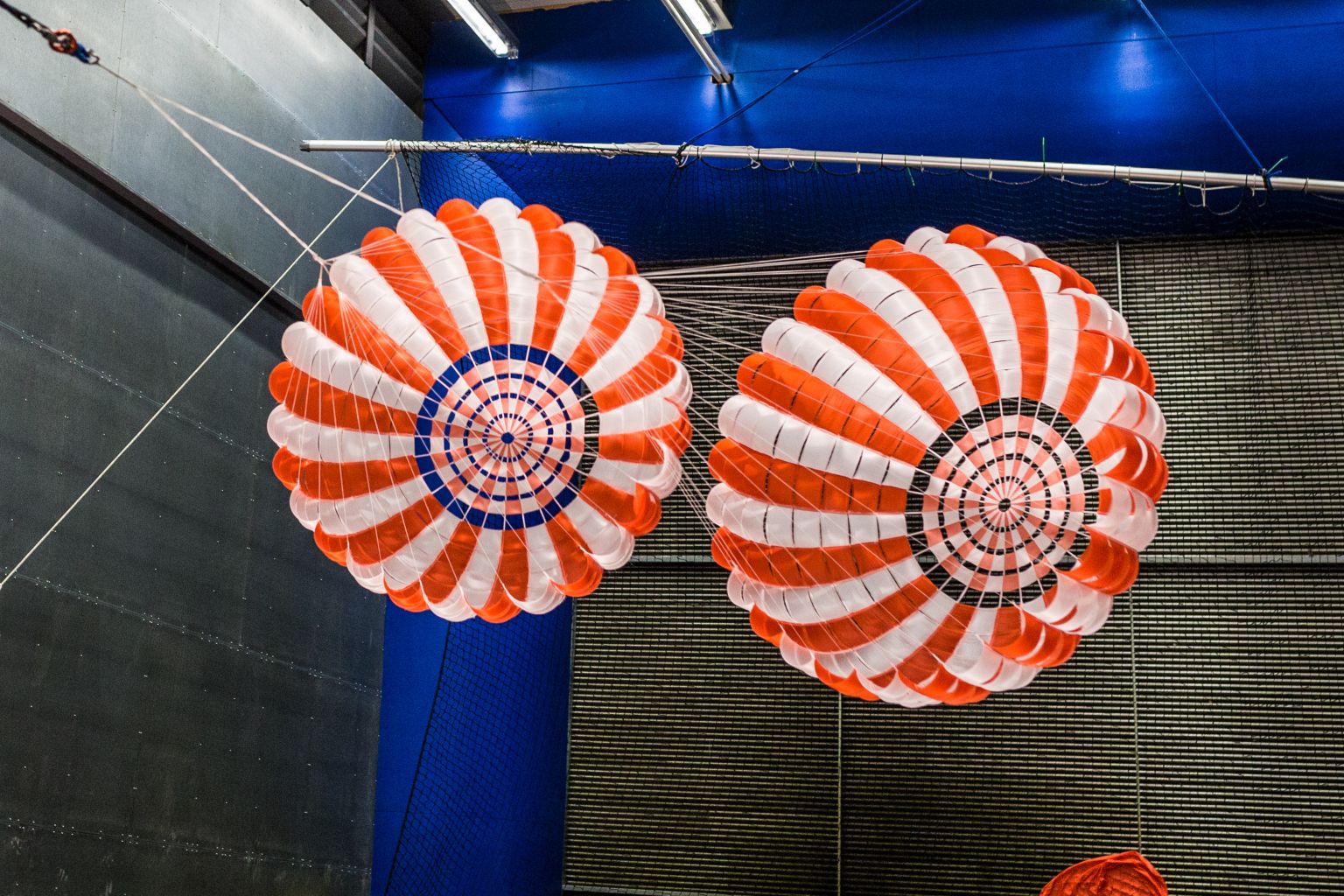 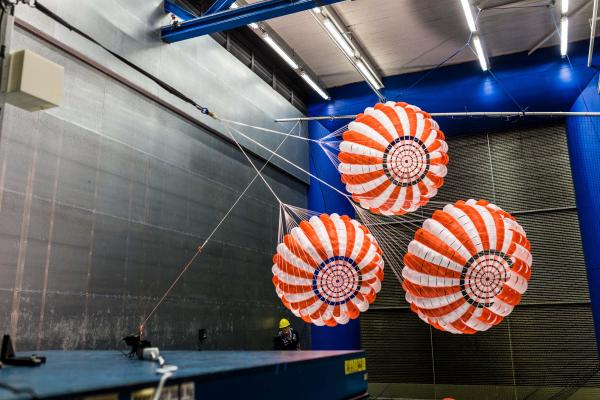 There was serious doubt that the wind tunnel could manage to keep all three parachutes in the air at the same time. The video also shows that one parachute drops below the airflow for a short while.

Below is a collection of raw footage from most tests. Pay particular attention to the final clip where you can see that all three parachutes have difficulty catching air at the same time. 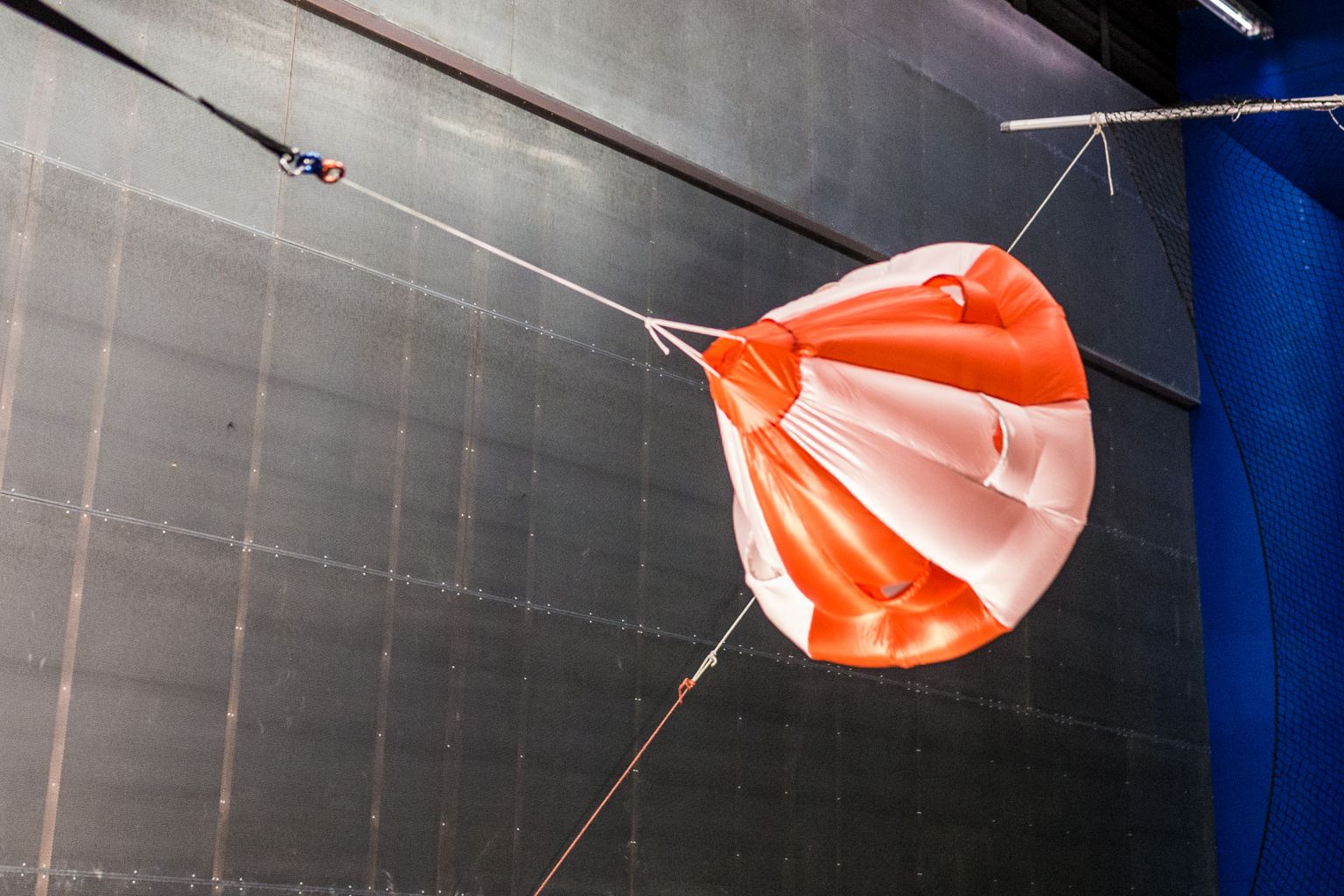 I must honestly admit that I was very excited about this test. At the drop test I had done earlier it seemed that it would have a bigger drag than our first design. It turned out to be correct.

Ballute mk1 with a carbon fiber rod and air intake 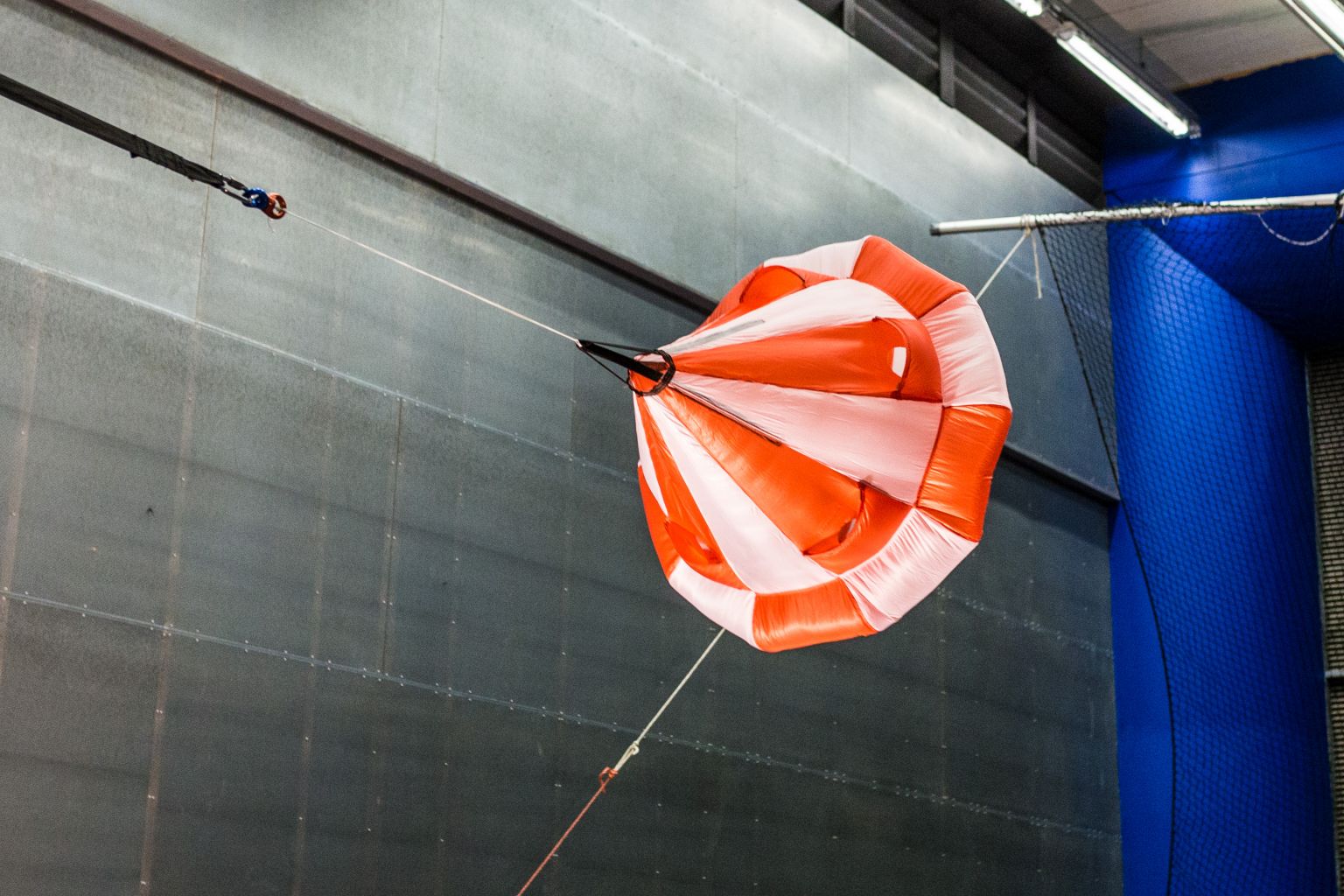 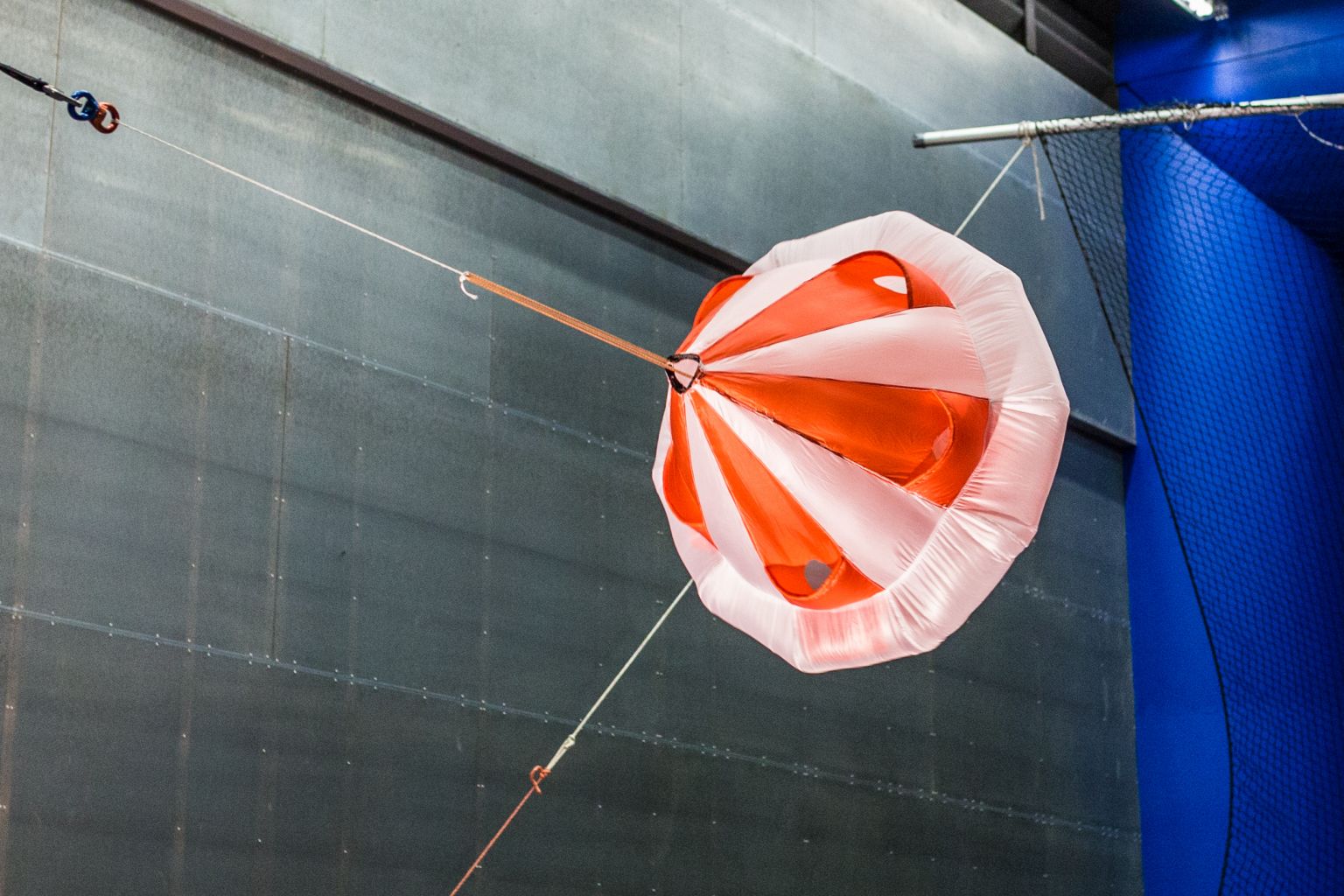 One of the most important differences between the two designs is that the surrounding donut has gone from being an extra layer of fabric that is sewn on, to being part of the same fabric as the rest of the ballute. Thus, in the new design it is completely open in the big center and out to the “burble fence”. The difference can be seen in the slow motion recordings, where the old ballutes first expands the balloon part, then the ring part. When using the new ballute, it’s more like one continues motion. Whether it’s an advantage or a disadvantage, I’m still uncertain, but I have it at least on my observation list. 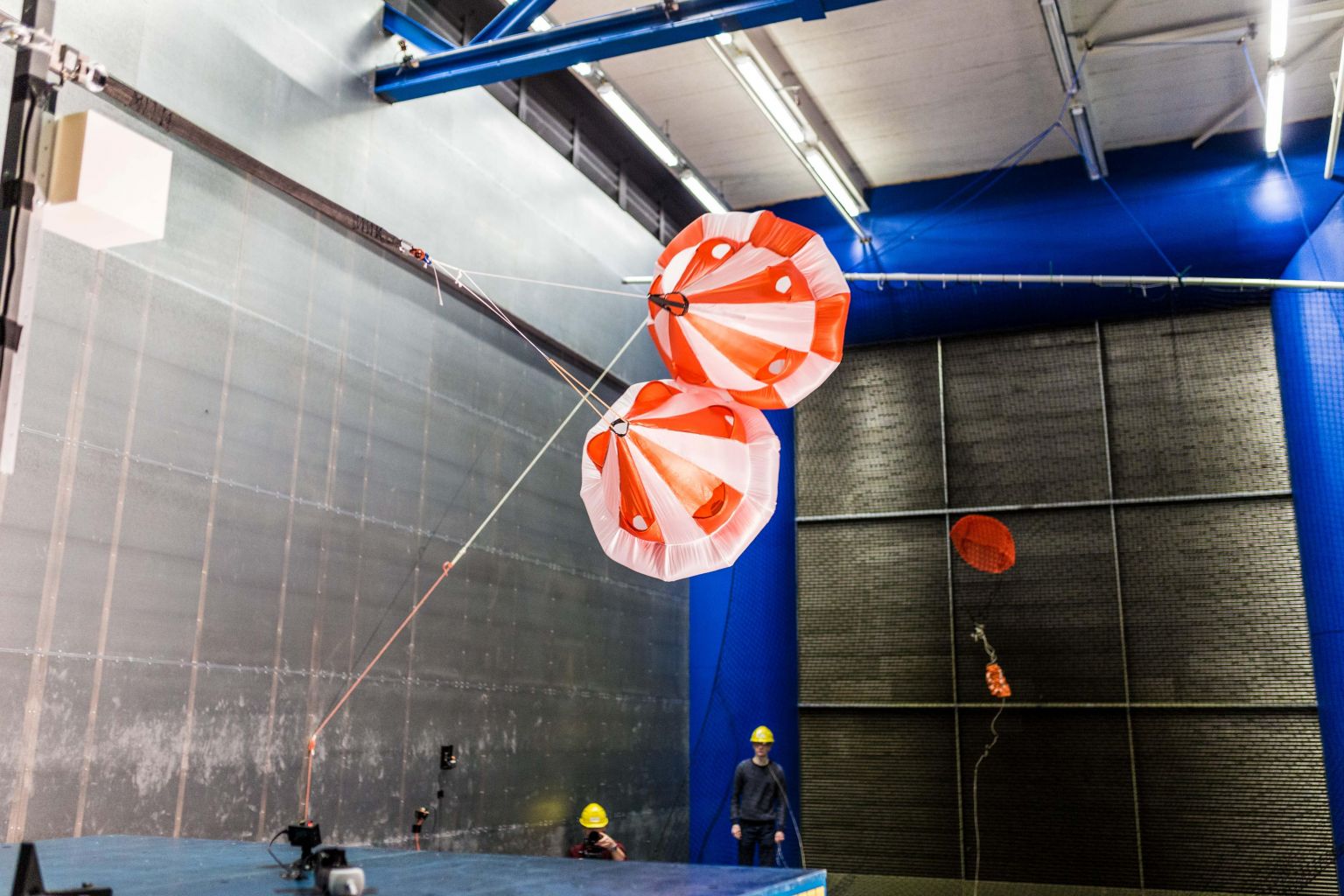 The two ballutes behaved nicely together. 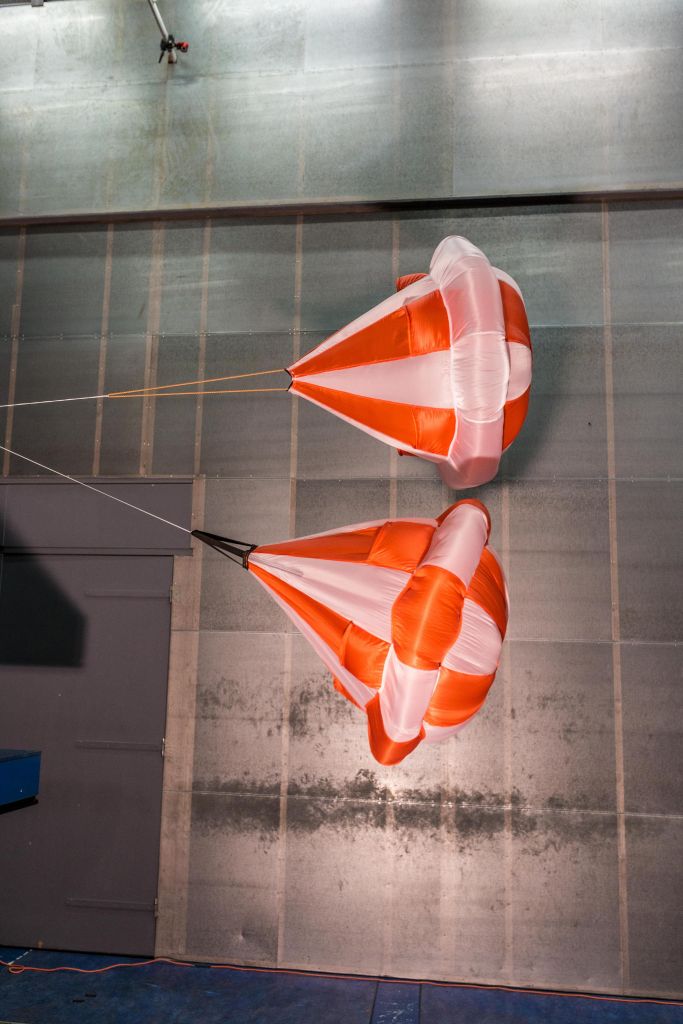 In the video below they can be seen together. At times I sometimes thought they looked like two playfull dogs on the same leash 🙂

Here is a collection of raw footage of the ballute tests

Before going to Holland we threw the parachutes and ballutes out from the top of our big neighboring building, called S2, a couple of times. 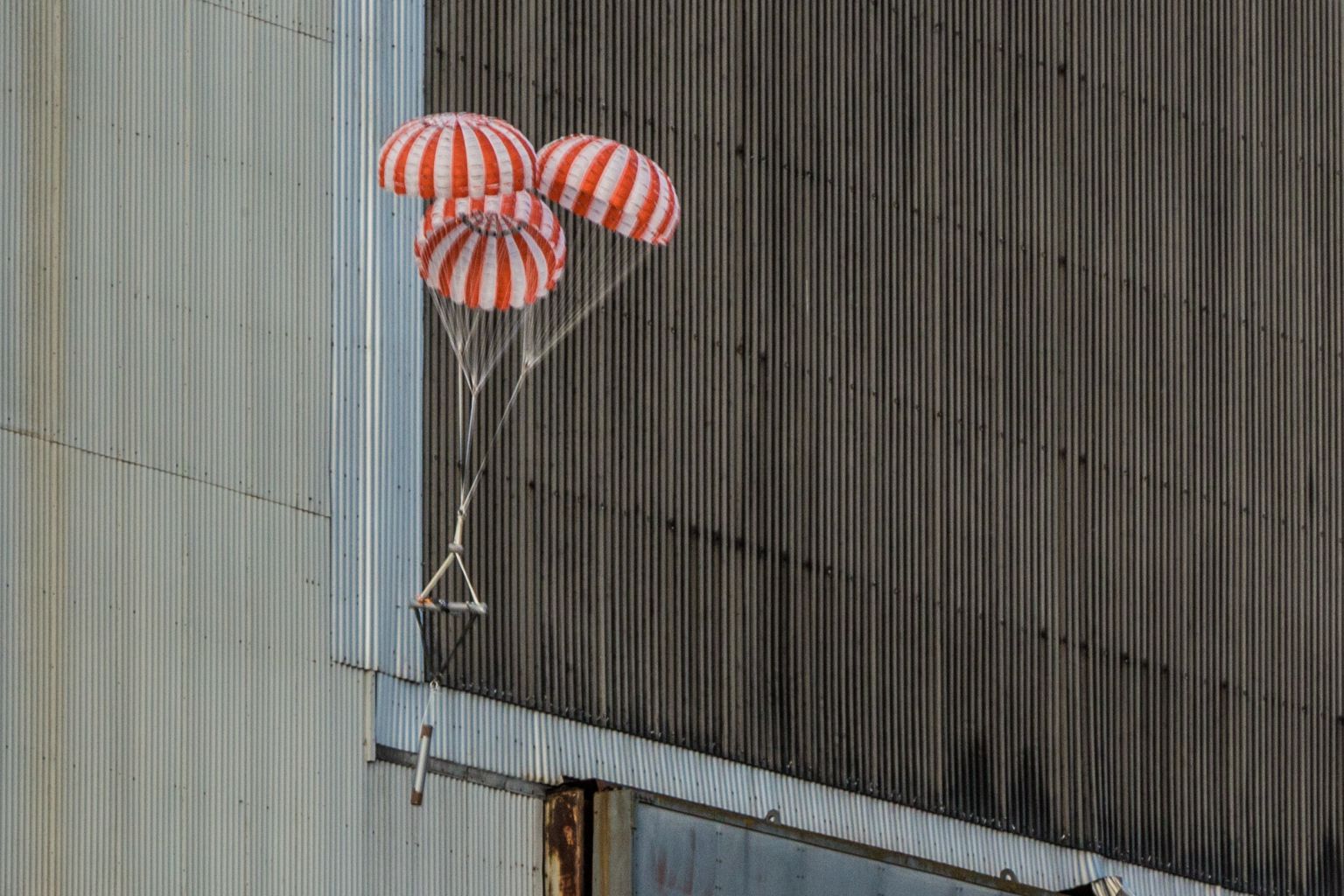 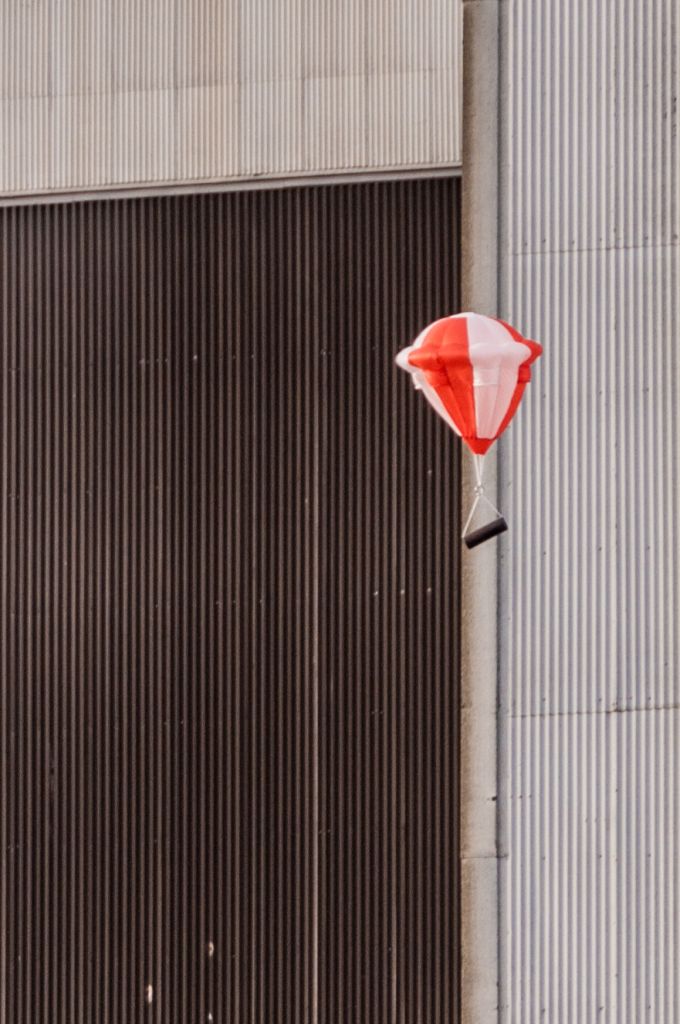 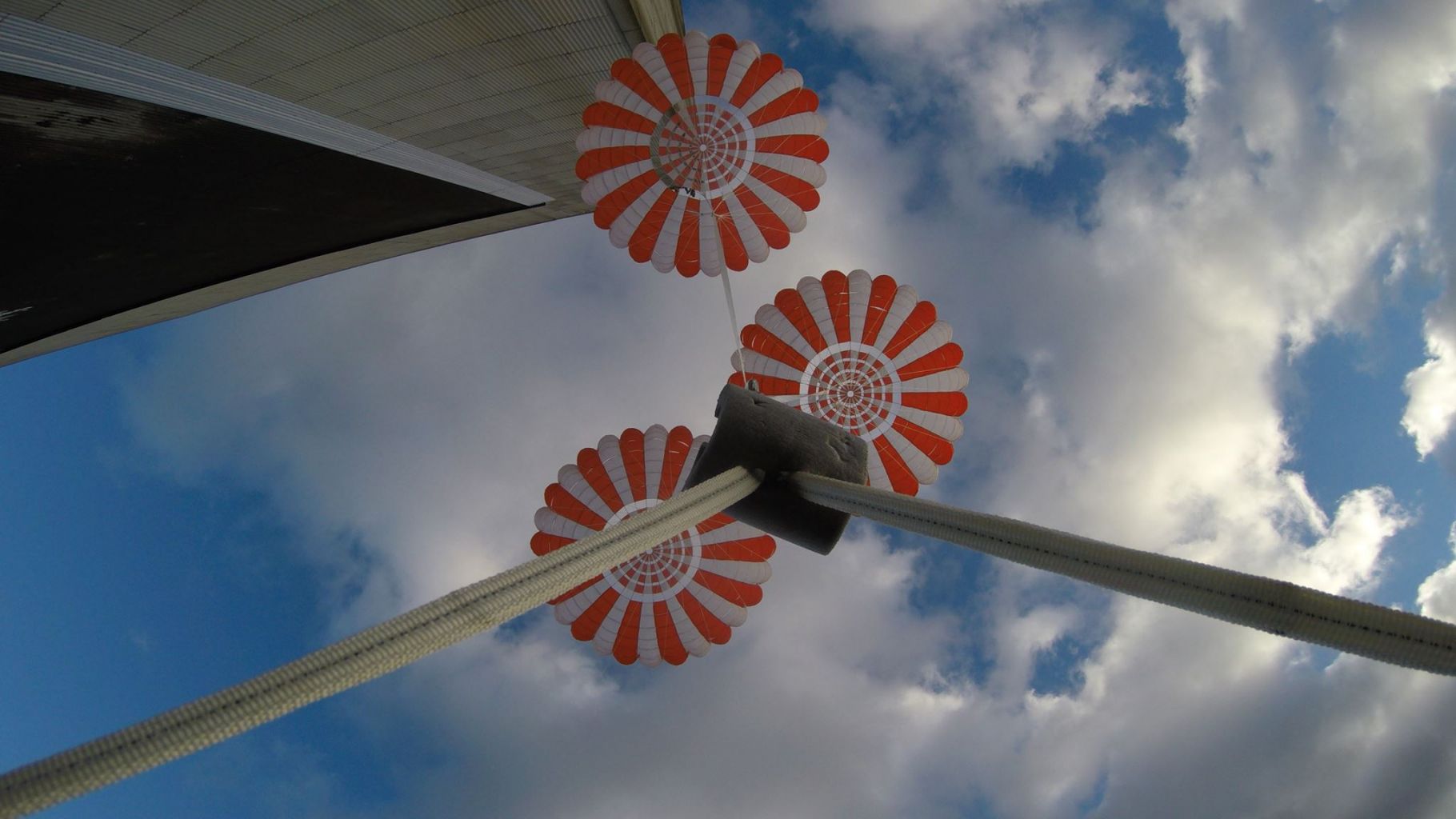 Below is a slow motion video of the drop test with the three mini main parachutes.

Earlier I wrote that we had some prioritized questions that we wanted to get answered. Below are some thoughts about the findings.

How much  will the drag be reduces on the main parachute when the opening is reduced (reefed) to 5, 10 or 25% area.

The measurements show a smaller reduction in drag than what the area is reduced with. 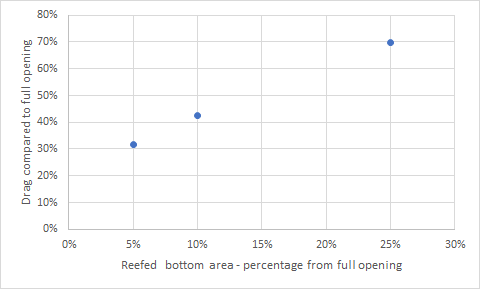 To see stability and drag differences between the old and the new ballute design.

Based on a relatively modest change in design, we managed to measure an increased drag of 7-10%. I am very pleased with that. Given that the new design is easier to make, more uniform and symmetrical in its final shape, and also weighs less than the old design. This is great news for the mission.

What is the difference in drag per parachute using either 1, 2 or 3 parachutes

In the end, we plan to fly with three parachutes above the capsule. The challenge when it comes to calculating the required size of them is that you can’t just measure a single one and then multiply by three. The parachutes will affect each other in a cluster, so that they are more angled. This effect is important to take into account when designing the parachutes design and size. It was difficult to get accurate measurements due to the size of the parachutes in relation to the wind tunnel size. Our measurements indicate that with two parachutes there will be no reduction in drag per parachute. With three parachutes we can measure about 9% efficiency loss per parachute. This we should compensate for in the final design. However, we need to verify this result, as it is twice as much as the textbooks indicate that we should be.

How do two ballutes behave together

Here we’re in unknown territory, as I have been unable to find any literature in this area.

There’s two reasons that I want to investigate this.  Firstly because it’s quite difficult to sew a ballute big enough for  Spica. Secondly there is also an aspect of security, as it will be nice with some redundancy.

At the relatively low speeds we saw in this test, I was pleased with the stability of the two ballutes. What I didn’t learn, and what I really could need some help with, is how they will behave at trans- and supersonic speeds.

If anyone is able to contribute knowledge in this area, it will be greatly appreciated.

A big thank you to DARE, and the members of their parachute group. I am extremely grateful for the invitation and the result of the cooperation, and I sincerely hope that we can continue the good cooperation in the years to come.

The next blog I write will be about the amazing test we had at Center Jump in Odense. For the first time, we managed to get three parachutes to float in the airspace above Odense Airport. It was a beautiful sight and I’m looking forward to sharing the results with you.

Two ballutes resting against each other at transonic and supersonic speeds instinctively seems to me a bad idea: the curved shockwaves curling off the burble fences will intersect each other, and where they do, you’ll get very hot, unstable flow. Reckon it’ll shred the ballues.

But how do we test this before a flight?

The windtunnel experiment showed that the parashutes were not stable – even though the airflow is assumed to be stable. The tower-drop, on the other hand, seems to show stable drag.

Is the any simple and obvious reason for this difference – I assume the windtunnel airflow was comparable to final decent speed ?

Hi Jan
The area of the (stable part of the) windflow was smaller than the area covered by the three parachutes. As I write, we had before the test talked about this issue, but decided to see if it would be possible to gather at least some data points, to work on. So this behaviour was more or less anticipated.