The Nexø slipway is scheduled to take the Vostok onto land on March 29th, 2017.

We have had the Vostok since November 2012. It still hasn’t been on land in the time the association has owned it. In that time, we have had to settle for inspecting it by diving under it, which has been possible because one of our members has a “paid second job” as a professional diver.

It is, however, now time to bring the Vostok onto land to thoroughly inspect it. 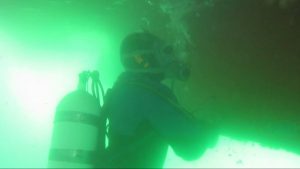 The purchase of the Vostok

The Vostok was purchased by Copenhagen Suborbitals in November 2012.

Money for the down payment, transport home from Norway as well as the initial repairs and retrofitting, was raised via ing.dk.

A current member of CS has personally stood surety for the remaining debt towards the Norwegian seller.

Because the fulfilment of the debt of the Vostok happened in July of 2016, it was drowned out by the news of the Nexø-I launch. It was, however, an event in the history of CS which was well worth celebrating. 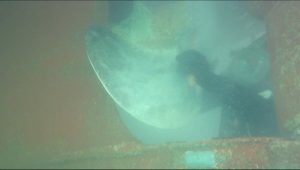 Why bring it onto land now?

Spring has arrived, so it is possible to paint it outdoors.

We had a planned slipway stay in the fall of 2016, but it had to be cancelled a few days prior. Several of the essential CS members had to cancel due to either illness or emergencies at their “payed second jobs”, and because the weather prognosis had changed, to predict too severe winds for it to be possible to bring the Vostok onto the slipway.

Then it properly became fall, with short, cold and rainy days, which is bad news, when you have to paint outdoors on a dew-free surface.

Now that spring has finally arrived, and enough of the CS members, with the appropriate skills, are able to simultaneously take a few days off to go to Bornholm, and with a promising weather forecast ahead, it is now time to complete the slipway stay. 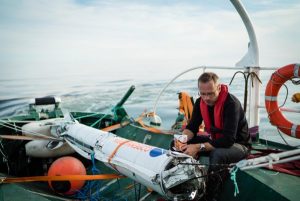 What has to be done?

As soon as the Vostok is on land, it has to be rinsed and scraped clean of any fouling. If this is done immediately, it is rather straight-forward. If you wait even just a few hours the barnacles, in particular, harden and have to be removed mechanically using either hammer and chisel, an excavator, explosives or similar methods – scumbags https://www.google.com/search?q=ruer

With a clean hull, we will measure the thickness using an ultrasound sensor. These results will then be compared to the measurements and notes of a former owner.

After the thickness measurement, we’re either happy, content or very busy finding offers from scrap yards.

Then, it’s time to paint it.

Hempel has been kind enough to offer a rocket-discount, so we have a good selection of their products available for the project of painting the Vostok. It’s always nice to have the world’s technologically leading paint-company behind you, when you need to paint a ship. It’s also their paint, which keeps Sputnik nice and healthy. Hempel has supported CS for a lot of years with paint for the ships.

The painting system requires each layer of paint to be applied within a certain short timeframe after the previously applied layer. If you wait too long, you will have to wait several days for the paint to fully harden, before you can then apply the next layer.

This is why we have created a detailed work schedule for everyone involved, and why we have to live on-board or nearby while the job is being done.

While the Vostok is on land, we will inspect the anodes and replace some if need be. We will also clean and inspect the seacocks and we will clean the rudder and propeller. 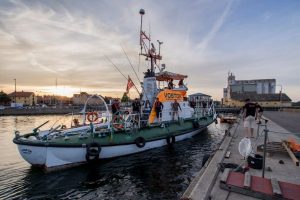 Watch the Nexø II mission from ESD139 in the Baltic Sea.