Recently, there’s been some confusion on this blog about what we’re doing at Copenhagen Suborbitals (CS).  What’s the deal with BPM-2 and BPM-5?  Why would we build more BPM-5 engines?  How far along is BPM-100?  And why are we talking about ablative cooling and epoxy/fiber engines now that we’ve got circulating flow cooling working?  What’s REALLY going on?  I’ll try and cast some light on these questions in the coming weeks over a series of blog posts.  But first, something quite topical.

A few weeks ago we were a small group of CS people braving the snow and cold in Jacob Larsen’s car, heading for Aalborg. Our “colleagues” from GomSpace had arranged a short afternoon seminar on the new Danish laws governing space where, among others, representatives from the Ministry of Danish Industry, Aalborg University and several others were invited along for a panel discussion.  Andreas Mogensen was also there, and we spent a few hours discussing the goals and consequences of the pending legislation as well as hearing details about plans for the creation of a special “Office of Space” under the Research Ministry; it was quite interesting and informative.

We were probably fifty people in the auditorium and unfortunately there was a lot less time than there were questions from the audience, but we got the opportunity to speak with many relevant people and I’m sure that CS will be able to find a way to operate in the future in cooperation with the new Office of Space, and all the other authorities involved.

On the way to Aalborg we stopped off in Aarhus where our former intern Sylvester and a colleague had built what is very probably one of Denmark’s largest 3D printers. Together, they’ve started a company that makes large plastic prototypes. Sylvester has repeatedly offered CS printer time, and so we specifically talked about possibilities for 3D-printing moulds, for example, and also about fiber casting of nose cones, and not least making positive molds for casting and winding LARGE motor chambers in fiber / epoxy.

3D printing has an absolute accuracy of some tenths of a millimeter, but the main thing is that this method could give us moulds that are much more precise than we can make by hand, and could also make moulds for nose cones and engine tubes with a very uniform geometry. 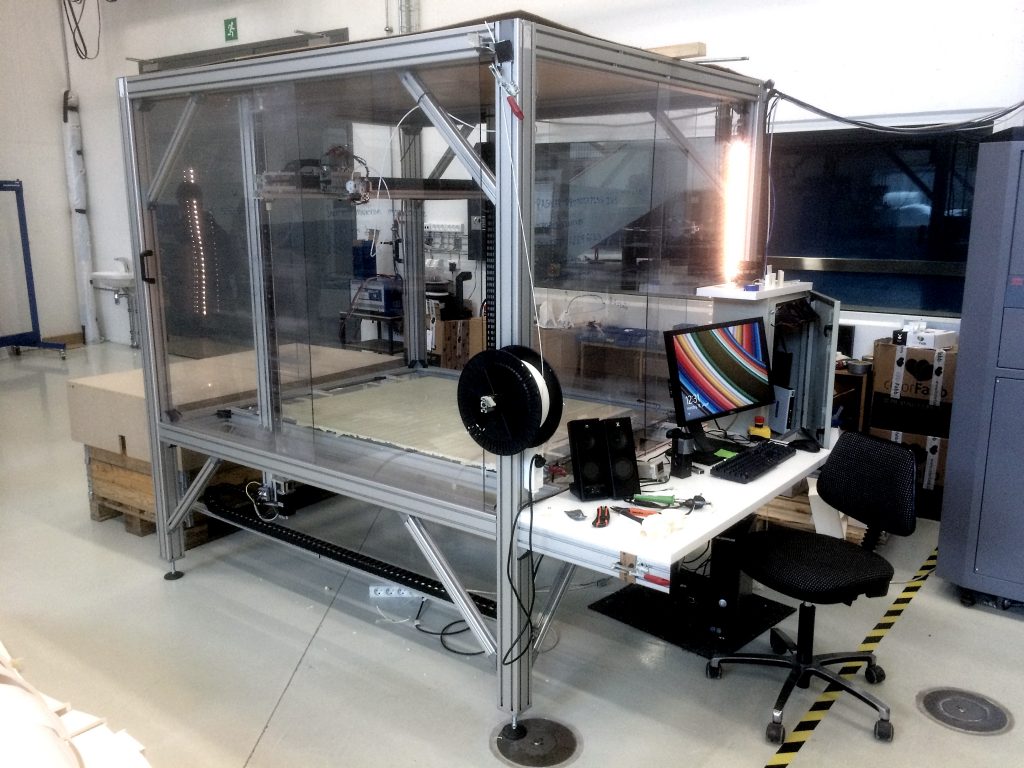 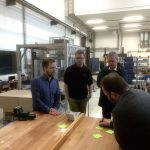 To go back a bit – and let’s start at the beginning, or rather the end, of an era; when HEAT2X caught fire on the launch pad. The engine of HEAT2X was an improved and slightly smaller version of TM65 but built in much the same way; laser cut sheet pieces were rolled and welded together.  The HEAT2X engine was the first major motor controlled autonomously by an electronic “Engine Controller” and its valves were opened synchronously by two large servos. TM65’s valves were controlled by two pressure-controlled actuators opened manually – also, the prestage and transition to the main stage was the result of something as high-tech as a finger on a button. But that obviously won’t work well in a rocket, so the CSduino was developed by Bo Brændstrup specifically in order to create an autonomous and “intelligent” engine controller for HEAT2X.

The CSDuino is designed as a generic computing platform which can be used to control all of CS’s future engines and, indeed, is the basic computer for all other subsystems of the rockets: Telemetry, Abort Control, Guidance etc. In the NEXØ rockets there are 3 CSduinoer: one for Guidance, one engine controller, and one for controlling telemetry. And our first real computer-controlled motor should have had its debut between HEAT2X’s fins.

The Engine Controller is a CSduino connected to an interface board that contains links and interfaces for pressure and temperature sensors, among others. The controller can receive commands via a radio uplink and sends corresponding telemetry packets about engine condition and health to the receiving station. During the flight, there’s no way to manually control how the engine behaves and have the ability to shut down if the telemetry data indicates that something is wrong. So, among other things, this system should have had its baptism of fire with HEAT2X.   And I promise you, that’s exactly what it got.

When we got hold of the heap that was sadly left behind and the whole team gradually began to get some courage back, it quickly became clear that we in no way had gained the experience we had hoped. We then had the amazing results from Sapphire rocket as Nyboes guidance system steered safely to its goal, but NO experience in managing a fluid motor. Sapphire was a hybrid engine, which due to its construction only had two settings: Off or FULL steam ahead!

Let me stress that the engine controller was just one victim of the fire. In the few seconds it lived did it exactly as it should. The reason that HEAT2X collapsed was a breach in the internal engine cooling jacket. That is, a structural problem and not a technical one.

And so there we stood in the remains of HEAT2X: What to do?

And that’s the proper story: What’s are we really aiming for?

Instead of throwing ourselves into building a new large engine and into another project of HEAT2X’s size, we decided to go for a longer-term plan. A boring engineer-like approach to get to the goal, right?

Although the Spica rocket wasn’t the first to be announced, it was actually the first to be talked about.  We’re working backwards with Spica.  What’s the smallest capsule in which a human being can survive the trip 100km upwards, and get safely back down again? What will it weigh? What is the smallest rocket we can build in order to lift that mass over 100 kilometers? And that was pretty much the start of the Spica concept. We’re emphasizing that SIMPLE is not necessarily the deciding factor.  Instead, we’re asking, “What will work well enough?”.

Here’s another chance to check out the rationale and design considerations presented at one of our first design seminar.

It is daft just to start building a large rocket. Bigger is, as is often said, not necessarily better. It’s boring but: without proper control and regulation mechanisms, we won’t get far. You can’t just fly a 4 tonne rocket that goes over Mach 3 – and then count on the entire mission being done by a man pressing some buttons.

So we chose to start with a clean slate. Spica is the goal – but before we get there, we need to gain experience in managing liquid engines, we will have to make several attempts with active guidance, and we want that, as much as possible, what we build and experiment with on the way gets us closer to the end goal.

Before Christmas, we gave a status update here about what happened in 2014 and 2015. Since HEAT2X caught fire in the autumn of 2014, we’ve designed and built two types of engines – we made ten BPM-2 engines and (at the time of writing) have built three functioning BPM-5 engines with more on the way. (I’ll talk later about WHY we’re still building BPM-5 engines). Over the summer of 2015, we did almost 30 motor tests, the Nexo 1 rocket was designed and built and got very close to a successful launch attempt. And this is just the rockets. At the same time, the workshop was upgraded, we developed new standardized telemetry antenna trackers, held courses for Nanyang Technological University, and Nexo 2 is well on the way …. And believe it or not, we still don’t think it’s going quickly enough 🙂

And while you’re waiting for part 2, why not enjoy Mejling’s latest video, which is a little status update from the workshop?