Designing the world’s largest amateur rocket is not an easy task. It’s an iterative process with a lot of dependencies. One of the very important dependencies relates to the rocket’s “propellant delivery system”, so how do you get fuel into the engine. There are several possibilities where a turbopump is clearly the sexiest, but also the hardest to master. On Nexø II, the fuel was delivered via the DPR system, which basically consisted of a tank of 20 liters of helium at 300 bar and a set of control valves. Let’s look at how such a system will look like in Spica size.

Let’s assume that Spica without fuel has a weight of 1700 kg and that its BPM100 engine is running at a chamber pressure of 15 bar. To bring this up to a height of 100 km, we need about 2000 kg fuel. At an OF ratio of 1.3, the LOX/ethanol has a medium density of approximately 1000 kg/m^3, so the size of the fuel tanks must be approximately 2000 liters. If we are to fly with 100% thrust all the way (we most likely won’t), then we have a volume of 2000 liters, which at MECO has to be pressurized to around 20 bars. It will require 40,000 standard liter (SL) of compressed gas (nitrogen) to achieve. It must of course be brought along in a compressed form, but it also has its price. During expansion from the high-pressure tank and down to 20 bar the gas is cooled and “loses” volume according to the ideal gas laws. The temperature drop is calculated easily as the final temperature is given as

Where T1 is the starting temperature, P1 and P2 are start and end pressures, respectively, and gamma is the ratio of specific heats, which for nitrogen is 1.40. Below, I have plotted the end temperature as a function of starting pressure, assuming we expand to 20 bars starting from 295 K. 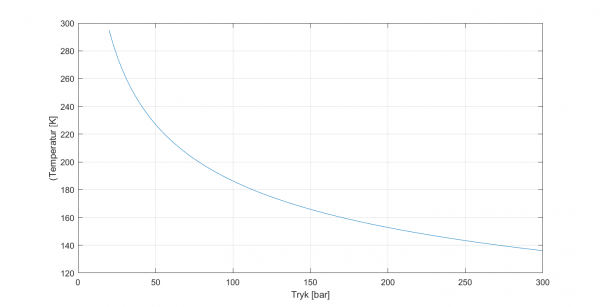 If we initially have 300 bars in the tank, then the expanded gas will have a final temperature of approx. 136 K, it will have “lost” more than half of its volume. Of course, it gets better the closer we get to P2, but overall, we lose almost 40% of the gas volume due to this cooling. If we need 40,000 SL, we must bring about 67,000 SL. If we use the same tank as for Nexø II, then we need 11 of these. They each weigh 12 kg, so we have gas tanks for a total of 132 kg. Then additionally we have tubes, fittings and valves …

It is therefore a heavy system. And an expensive system. The high-pressure tank on Nexø II was one of the most expensive single components of the rocket, with a price tag of around 10,000 kroner, imported from China. If anyone out there knows about large volume lightweight tanks at a reasonable price, we’ll be happy to hear from you. 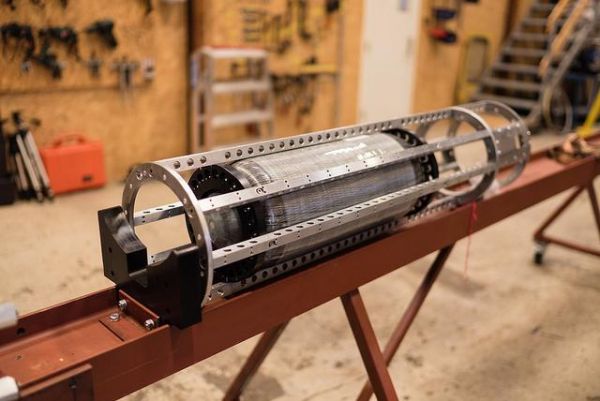 Considering this, we’re looking at something else. We plan to introduce another cryogenic liquid on Spica. Besides, of course, having LOX on board, we are strongly considering taking the necessary nitrogen for pressurization in liquid form. If we bring only 40 liters of liquid nitrogen which you then evaporate and heat to 200-300 degrees, then you have all the gas you need.

Heat is available in ample amounts in the BPM100 engine, but we are a little nervous about having to implement a nitrogen heat exchanger in the engine, so we consider bringing a small burner that just has to evaporate the liquid nitrogen and heat it up. An important advantage of using a separate burner is the ability to test it without having to do a whole BPM100 test.

Nothing is certain at this point. We need to do some more calculations, but I find it very exciting. Though I’m not much for the extra complexity of having two cryogenic fluids on board. But in spaceflight, things rarely come without these kind of costs.

Is the turbopump still an option? Some guy wanted to give you one.

Well a turbopump is not on our current roadmap. Allthough if one was available to us we might rethink the plan.

I am redesigning the LOX pump design, I am lowering the chamber and the rotor and changing the material to a 6000 grade aluminum. The turbo pump and its components will be cast, machined and assembled at FATEC (Faculty of Technology of the State of São Paulo), cast in an induction furnace. and SENAI (national industrial learning service), CNC Turning and CNC Machining Center – ROMI.
he deadline for it to be operational is until the end of the first half of 2019. But first I want to meet Cpo Sub personally.

Any plan of visiting DK then? Would love to show you the workshop.

Liquid nitrogen is a good option to reduce size!
In case you decide to go with the TP route, I could give you a hand with the design.

Hi Jan,
DPR is Dynamic Pressure Regulation. A way to push fuel into the engine.

Here is some more blogs covering (among other things DPR).

“The pressurizing gas must not condense, or be soluble in the liquid propellant, for this can greatly increase the mass of required pressurant and the inert
mass of its pressurization system hardware. For example, nitrogen pressurizing
gas will dissolve in nitrogen tetroxide or in liquid oxygen and reduce the con-
contration and density of the oxidizer. In general, about 2,5 times as much
nitrogen mass is needed for pressurizing liquid oxygen if compared to the
nitrogen needed for displacing an equivalent volume of water at the same
pressure. Oxygen and nitrogen tetroxide are therefore usually pressurized
with helium gas, which dissolves only slightly.”

Also possible; in the A4 they used to evaporate LOX to pressurize the LOX tank -> less mixing.
Fuel tank could be filled with fuel rich exhaust from burner.

We have tried pressurizing LOX with nitrogen. Works fine, even on a timescale of a couple of minutes which is all we need.

Obviously the DPR system is critical, and liquid nitrogen seems to be the way to pressurize the system. If the current tank can handle the cryogenic temperatures, and is able to be reflown, then the tank will ideally be taken care of. Unfortunately, any container will most likely need some additional insulation, due to the potential of frost, structural damage, or a boil off and nitrogen tank explosion.(rapid boiling event) The boil off also could help pressurize the tank and force the fluid to the burner/heat exchanger.

I am concerned mainly with the low temperature of the liquid nitrogen system, and the need to keep condensation of oxygen inside the rocket, most importantly by electronics or sensitive valves. The placement of the tank(s) could also cause problems to other temperature sensitive systems.

If you need any support in the form of ideas/feedback, I can only contribute from America, but I’ll still try to support everyone on the team.

As a random thought, do you have a test payload, such as a data package, for the first test flight of the Spica?

We have been thinking about putting the LN2 tank inside the LOX tank. That will prevent LOX condensading from the atmosphere. Any thoughts on that?

We will have a full suite of acceleration, temperature and other sensors. And I am sure that Rescue Randy, our crash test dummy will be onboard as well 🙂

I really hope you can find some tanks at a reasonable price. I admire your work and your effort, and I wish you the best of luck!

I could try designing a turbopump, in case the pressure-fed engine doesn’t work.

Hi,
I know it sound a bit silly but in order to save fuel, why don´t you use same kind of helikopter driven by an electrical Engine while you are in our Athmosphere and just start the Rocketsystem when it is really needed.

I am on a school projet and we need to analyse numerically the variation of Temperature, Pressure and of the position of the Liquid Surface over time for a DPR type system on LOx and CH4 tanks. We are having a lot of trouble finding the right equations and implementing them in Matlab. Would you guys have any bibliographies that could help us out a bit please?

I wanted to back up and ask a familiar question, what were the reason(s) and order of items for settling for a 15 bar chamber pressure? Tank mass and a need for heavy pumps and plumbing? Engine weight and metallurgy? I’m sure some of those were the reasons but I’m wondering which of these was in a sense, the most onerous hill to climb.

The reason I ask is I’m reading a paper about a Brazilian Lox/Ethanol design where interior pressures are much much higher,, 5 to 7 MPa and while I realize going to these pressures involves having much more complicated rocket, is there not some ground for increasing pressure and solving the attendant problems via design?