Well not yet but, Scott and Alex performed a checkout of the Nexø II onboard (stream) video cameras and the downlink connection. If everything works out on the day of launch, we will be able to broadcast live pictures from the Nexø II flight this summer! The rocket will quickly disappear from ground view, but we’ll be able to bring the full flight to you LIVE, through the three on-board cameras of Nexø II. We’re expecting a rock-steady camera feed (as Nexø II is basically a flying testbed for the Spica onboard systems, avionics and equipment), meaning that the video downlink should be good for more than 100 kilometer downrange.

This test was just the first functional test on the flight hardware. While three individual streams will be multiplexed into the same downlink (in HD quality of course!), this debugging mosaic just contains four feeds of the day. 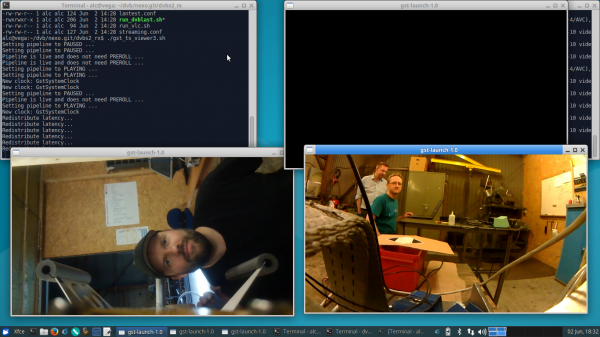 Upper left is output from the on-board video controller. Upper right view is the side-view camera (it is currently covered by other test materials, but is working fine). This camera should give some dramatic footage of the horizon, if Nexø II blasts through an upper layer of clouds, clears the white, ever-sunbathed cloud sea above and soars towards the upper atmosphere, at supersonic speeds.
Lower left is the down-looking camera near the engine section, where we expect our launch platform Sputnik to quickly shrink into a red dot on the surface of the Baltic sea. You can also see the fins and the fin protection foam.
Lower right is the forward-looking camera, which will hopefully capture wonderful pictures of the parachute systems, as each of them unfold and slow down the descend.
Man, we can’t wait to fly this beauty of a rocket!

The HAT (Harbor Acceptance Test), is one of two major upcoming milestones before the actual launch, and it’s coming up next weekend!