We have some great news from the rocket workshop. The work on our first “boilerplate” capsule is progressing with good momentum, despite the low temperatures of the season.

I want to promote the latest video from our hardworking video department, with Claus Mejling in the lead. The video is a good introduction to what I want to talk about in this blog.

Following the work, we told you about in this previous blog, we’ve been working several weekends to make the first capsule model ready. We’ve also been working on the not so insignificant mobile “stand” for the boilerplate capsule. Both the capsule and the stand are larger undertakings, so there’s still a lot of work to be done, but we’re confident that the result will be great. Because we’re using steel for the boilerplate capsule it will outweigh the final capsule with quite a lot. Where the final capsule has a mass budget of 300-350kg (including astronaut), there’re no restrictions on the weight of the boilerplate capsule. It’s primary purpose is to achieve a sensible and practical spacecraft layout.

The head of the capsule group, Martin H. Pedersen, has already provided the following illustration, which gives an insight into the proportions of the boilerplate capsule. 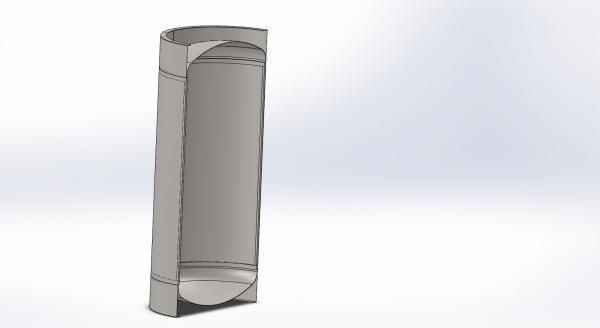 With its 955 mm in diameter it’s exactly the size we expect of the final capsule. In addition to the interior design of the capsule, we also have some other ideas for what this boilerplate capsule can be used for. Which of these are realized and in what final form is still unknown.

Initially, we planned just to stick to the design of the capsule, but it turns out that just a little more work is needed before we can expose the capsule to both pressure and vacuum tests. It just requires that we fully weld (almost) all joints and seams from the beginning, which is not that much more work when you’re already welding. We will be able to pump one bar (or more) pressure into the capsule if it’s gas-tight. With the pressurized capsule we can evaluate feedthroughs and the strength of the different joints. Specifically, the hatch must be tested and validated in the capsule to the extent that it is so stable and reliable that we dare rely on it as the only protection against an unpleasant end. This will be one thing we will spend a lot of time on.

We can also do something completely different and something more daring. Do you remember our old autoclave? It’s just big enough for us to place the complete capsule into the pressure chamber. Since the autoclave is equipped with an effective vacuum pump, we can evacuate the autoclave almost completely, which reminds a lot of the conditions in space. Later, we will have to train our astronaut candidates for a real trip into space. This could very well involve some trips in a capsule, in an evacuated autoclave. Indeed, we must have tested and validated a simple “life support” system, with various safety measures, so that we can maintain a reasonable amount of interior atmosphere while the capsule is outside the thick part of the atmosphere.

Of course, we must have several unmanned tests and various safety devices that can restore the atmospheric pressure in the autoclave in seconds, but in the end, we’ll be able to train different “unpleasant failure scenarios” with a person in the autoclave. We need some different systems on board that can “extend the durability” of our astronaut, even if things do not go as planned. 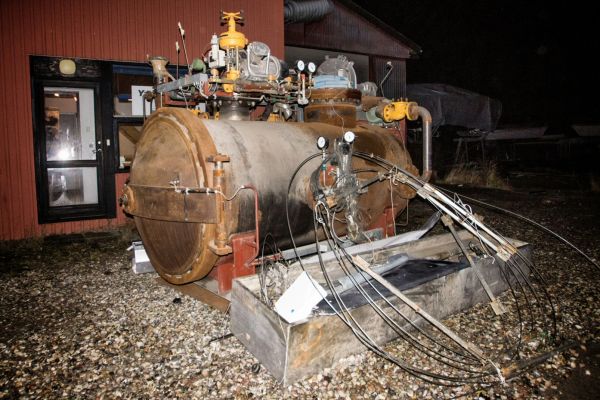 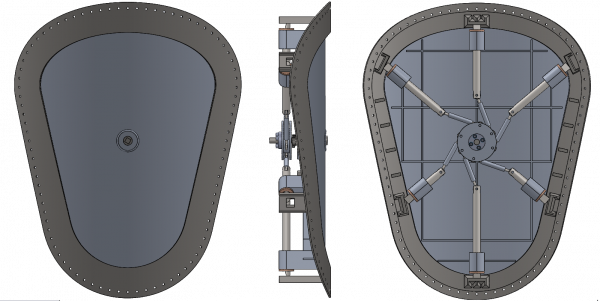 Hatches in a pressure bearing construction is a giant headache, as such a “foreign body” in a nice cylindrical surface is pure poison for the strength of the construction. We’ve known this for a while which is why we’ve early on asked a bunch of clever engineering students about their take on a solution. My own gut feeling is that we’ll certainly test several different hinge concepts on the boilerplate model, probably under both pressure and vacuum. Again, a boilerplate capsule will be of great help to us. If a hatch design is discarded, we can just cut it out, roll a suitable plate and then weld it into the hole. It’s so easy when everything is made of steel.

Now the fun really begins. We would like to perform drop tests with the boilerplate capsule. Whether it’s from a crane in a port or if we’re so lucky that we get the chance to throw it out off an airplane we’re not sure. These are all future guesses, but the plan with our boilerplate capsule is that it should be able to survive such a landing, no matter what.

We will be working a lot on the boilerplate capsule for long periods of time while it also will become heavier. Therefore, the capsule group has, in parallel with the capsule, built a stand for the capsule to use during its development period. The purpose of the stand is primarily to give us the possibility to easily unpack and pack it after a day’s work in the workshop. Martin has designed the stand so that the capsule can be positioned both in vertical and in horizontal. The first position is suitable for getting people and equipment out of the hatch we install in the side. 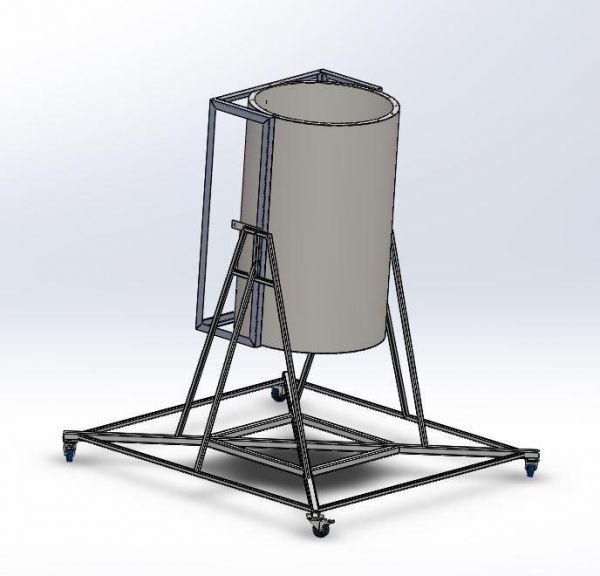 The other position is good to get for example a large seat frame out of the capsule when the lid is removed. 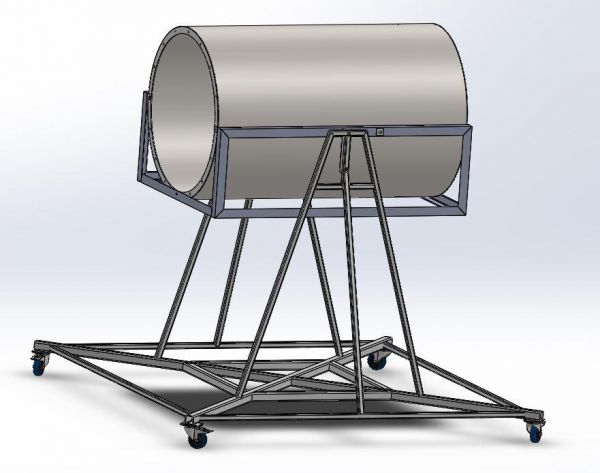 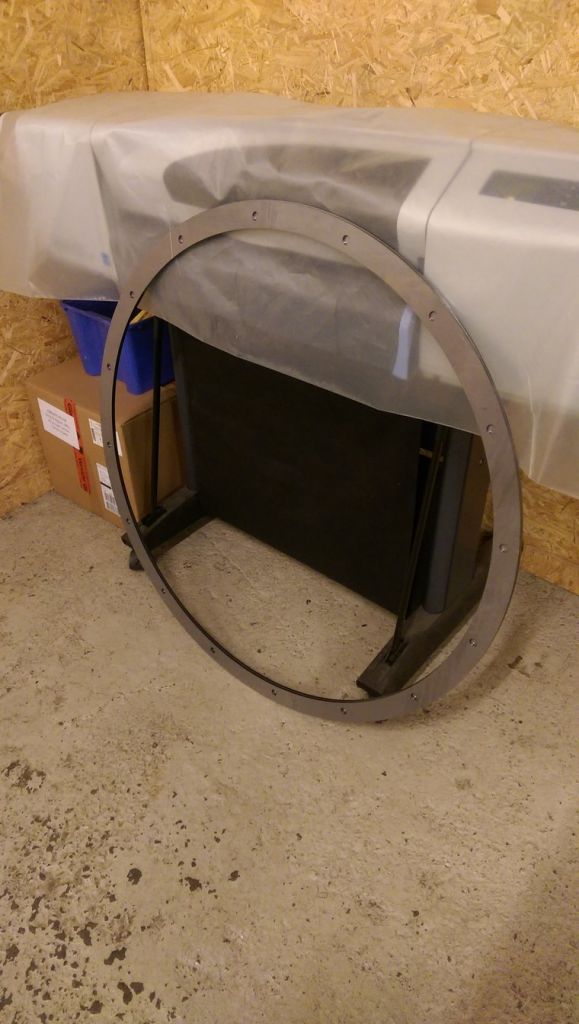 Some days ago, we test mounted the entire rack. The cradle of the capsule itself could easily swing between vertical and horizontal position.Illustration: CS 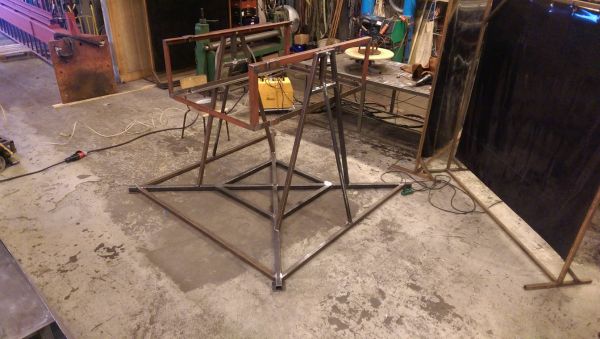 A lock bolt system has been implemented so that we can lock the cradle in either horizontal or vertical position. 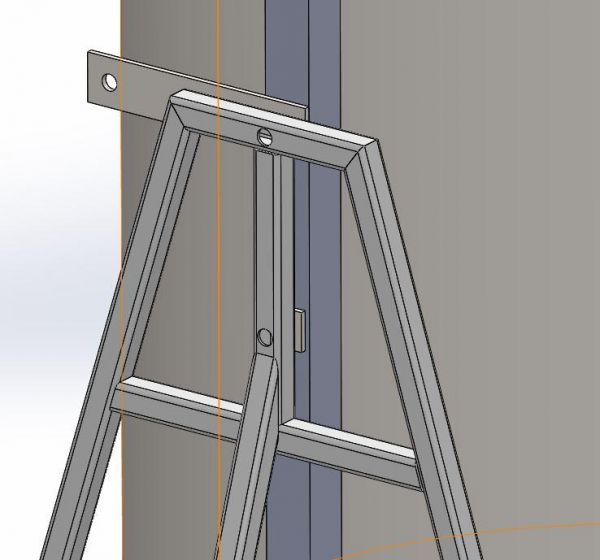 The work on the boilerplate capsule moves forward so quickly now, so we’ll very soon need to carefully consider how we’ll build our seat and shock absorber for the capsule. It won’t take long before the capsule and stand are ready, and we must have the next plans ready to start the construction of the seat arrangement.

The image bellow is one of the latest from the workshop where the capsule stand is locked in the vertical position in connection with the test mount. It’s going to look great, when both have got a couple of layers of paint. The endcap for the top of the capsule can be seen at the bottom of the stand. The next tasks for the production team will now be to roll and weld a short 230 mm wrap in Ø955 mm. We must have welded the last flange firmly at one end and then welded the bottom endcap onto the other end.

After the same mindset as the Nexø rockets, the boilerplate capsule is built as a universal module, with a standard flange as a fastening surface at both ends. It makes it much easier to bolt additional relevant modules, such as a parachute module, a RCS-modul (Reaction Control System and/or cold gas thrusters) or even a rocket. 🙂 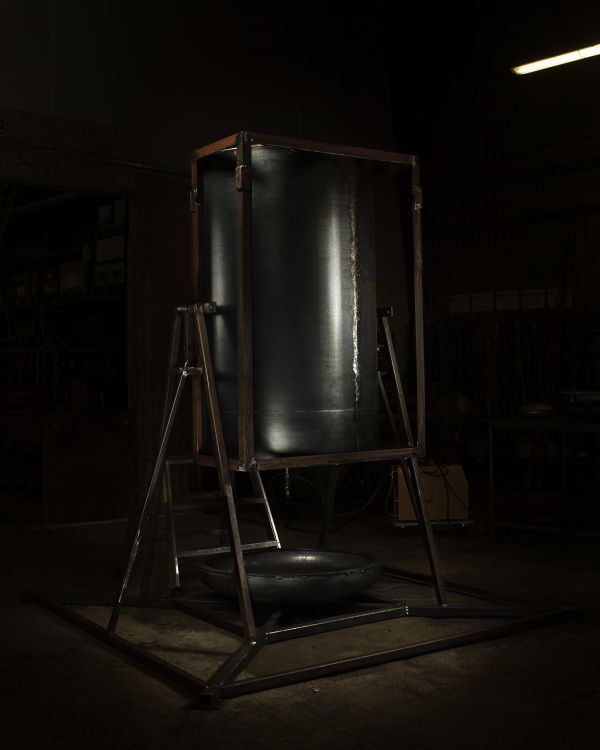 It feels good with some serious progress with the capsule. I’m looking forward to showcasing a realistic configured capsule and giving fans and supporter an opportunity to crawl into our very, very small and narrow micro cosmos which one day will be the only protection against the vacuum of space.

In my world, it’s no longer a question of whether we’re trying to get a person into space. It’s now only a matter of when we try. Yes, we’re still far from the finish line, but with the things going on in CS now, I can see the light at the end of the tunnel, coming closer and closer.

That was all for now, but we’ll return soon with more news from the capsule department. See you later!

Good Morning. Great news on your progress. I have been following you for a number of years, I am a retired astronautical engineer. I have contributed to your efforts a couple of times. I will be visiting Copenhagen from the United States in July and I wondered if you ever have tours or an open house or some time when the public can view your project. It is simply fascinating.Thank you. Rob Pepper