We are now just a few days from finally flying Nexø II over ESD 139. We are having some really busy days right now, sorting out final details and moving the entire crew and all necessary equipment to Bornholm to be ready for the Nexø II launch campaign. It’s long and busy days but also crazy exciting when CS is in Mission Mode!

CS has been in “Mission Mode” for quite a few weeks now, just look at the latest video from our Sea Acceptance Test below.

Inside look of Nexø II.

To simulate flight profile we use a home written simulation script. It is not very complicated. Essentially, it just runs a series of for or while loops, where acceleration is calculated based on the engine’s thrust and drag on the vehicle at the current speed, which is used to calculate speed and altitude. We assume that we fly vertically and thus we can simulate the ascend in 1D, but as we like to have the impact of the wind on the parachute descend we actually simulate in 3D.

In order to determine drag, some models of air density must be used as a function of height, and you must use a model for how the rocket drag coefficient develops as a function of speed. We use the same method as Hans Olaf Toft from Dansk Amatør Raket Klub has described in “2D Course Calculation for Passively Stable Rockets“.

In addition to drag from the air, Nexø II suffers another loss, namely loss of drag on its jet vanes. We have previously measured during static engine tests that this loss is about 10% of the engine’s thrust. Unfortunately, it’s just the price of flying with jet vanes.

With a starting weight of 292 kg and a thrust of the engine of 5000 N, of which we lose 10% for jet vane drag, Nexø II has a Thrust To Weight Ratio (TTWR) at lift off at 1.57, which gives us a start acceleration of about 5.7 m/s^2. It may seem very little for an amateur racket, typically you see amateur rockets with accelerations resembling ground-to-air missiles, but for liquid bi-props it’s quite common. Where Nexø II stands out from other amateur rockets of the same size, it’s just that it’s a liquid bi-prop and not either solid or hybrid that most other amateurs work with. By comparison, a SpaceX Falcon 9 lifts off at approx. 4.1 m/s^2 (7.6 MN lift to 549 tons).

If we succeed in maintaining a correct constant chamber pressure of 15 bar, the engine will burn 2.56 kg of fuel per second. With 114 kg of fuel on board, it gives a burn time of 44.5 seconds. Let’s look at how acceleration, velocity and altitude look graphically.

The acceleration is seen in the first graph. As mentioned above, we start out around 5.7 m/s^2 and at Main Engine Cut-Off (MECO) the rocket has become 114 kg lighter and thus ends with an acceleration of 11 m/s^2. The next graph shows that it produces a final speed of 370 m/s and from the altitude graph, we can see that MECO and peak velocity occur at an altitude of 7,200 meters. At this height, the speed of sound is 314 m/s, so Nexø II will go supersonically for a short while.

In addition to the acceleration, velocity and altitude graphs, I have also included graphs for the engine thrust and its specific impulse. As you can see, both of them rise slightly. Obviously, the ambient pressure drops with the height, so even if we maintain the same chamber pressure in the engine, the thrust increases and thus the specific impulse.

Throughout the flight we receive data from the rocket so we constantly know where it is. We receive both data from Nexø II’s own navigation device and we receive data from a standalone GPS device on board. These data automatically enter Mission Control, where we can always see where the rocket is right now. Even though the rocket flies vertically, it will land a good distance down range as it falls 3,000 meters in its parachute, where the wind plays a very big role for where the rocket lands. Therefore, we are actually trying to predict the landing point. We do this based on weather models where we can look up expected wind directions and speeds as a function of altitude. Such a set of wind data may look as below.

During descend, first under ballute since under parachute, the rocket will drift with the wind, which can cause a significant lateral range. For example, for the above wind data, it may appear as below. 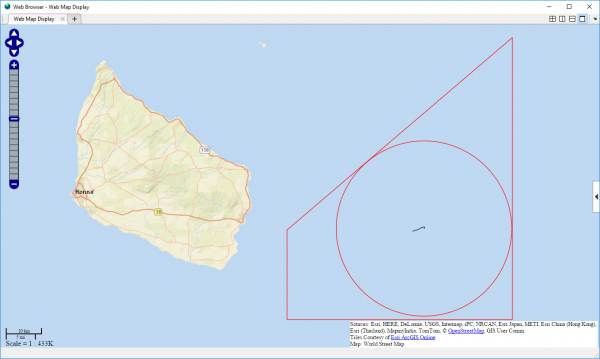 Nexø II is lanched at the center of the circle and the black line shows the expected drift due to the wind.

As seen, Nexø II does not set either altitude or velocity records. That has never been the purpose of Nexø II. The purpose has always been to serve as a technology demonstrator and to verify that the systems and techniques we are working on actually work.

And does it? Well, time will tell and now it is almost time. We expect to launch Nexø II in the coming weekend. We are extremely looking forward to finally getting to fly Nexø II and remember that you can follow the entire launch live directly in our stream at www.copsub.com.

And remember, your donation is our rocket fuel. If you want to see more exciting rocket launches from Copenhagen Suborbitals head straight to our donation page found right here.

It is bit strange that speed profile is flat while under parachute. Parachute should be more effective in lower altitudes.

We did a parachute test together with them in a wind tunnel at TU Delft back in December. They are a fantastic and very dedicated group of people!

[…] Suborbitals is preparing for a launch attempt this Saturday of the liquid bi-propellant Nexø II rocket. The rocket will launch from a platform towed out into the Baltic Sea near the coast of the […]