Our workshop is unheated, so we suffer a lot in the cold. Nevertheless, lots of things happens in the workshop as always, though it’s not all that looks like or is rocket science.

After putting Nexø II in storage last autumn, we’re now preparing it for the coming launch this summer. There were a few outstanding issues that we did not quite have time to fix in the fall. We will fix them now and use the extra time available to double check as much as possible. One of the issues we found were some leaks in the high-pressure system, so Nexø II has been on the operating table, where a thorough leak searching was performed. 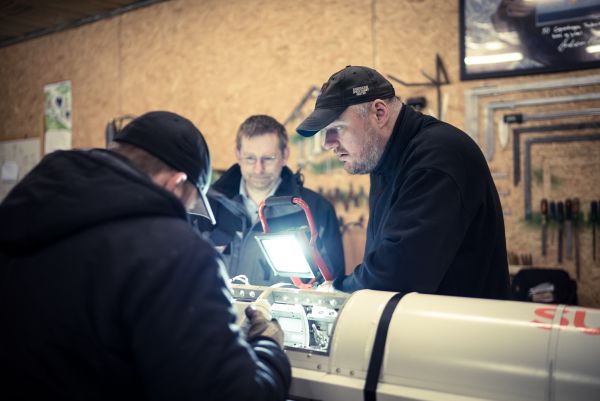 The process for leak searching is very simple. First pressurize the system and then go over all joints, pipes and valves with a flashlight, magnifying glass and soapy water to find places that are leaking. Once a problem is identified, there is nothing else to do than separate the joint, repack and then test again. There’s no big difference whether it’s a rocket or radiator in the living room – maybe just with the exception of the pressure.

The second “big” outstanding task is another test of the complete software setup of the Nexø II rocket. We managed to do a SAT, with the rocket on the ramp and all the systems in the fall, but as everyone who has ever worked with software enough knows it never hurts to put things away for a few months, make a thorough review, edit and then test thoroughly again. Granted, especially on the software part there were many things that were only completed in the last minute, so now it all gets another run through, so we hopefully can get a perfect flight with Nexø II this summer. We do not know the launch window yet, but we’re still working towards the first part of the summer.

As known, the DPR system is the major upgrade from Nexø I to Nexø II. We’ve tested DPR in the teststand several times, but we have not flown using it. Therefore, we’re currently considering a static test of the Nexø II rocket flight code, with DPR in the teststand. There’s still a debate about whether it’s necessary, but it is currently an option.

And of course, all the things that are always on the list such as preparation of ships, inspection of equipment and so on.

One of the slightly bigger issues has been the renovation of the tower on Sputnik. The tower has for a long time needed a new coat of paint. At the event at Ingenørens hus in the fall where we brought HEAT-2X with as a showcase object, a welding seam broke on the tower. The result was that the launchrail wasn’t completely straight anymore. It’s important that the launchrail is straight. Because of that the project of renovating the tower was moved up on our todo list.

Video about Sputnik, where you can see the tower lying in the workshop.

For the last few months, we have started producing a lot of small info videos about all the different stuff we’re working on. The idea is to make our website even better and make it easier for “newcomers” to understand what CS is all about.

Now the whole tower is in the workshop. It has been cleaned and has gotten a new layer of fresh paint. Now we just await better weather, so it can be re-installed.

BPM-100, Spica and a new teststand

The Spica project begins to take shape. We have built the frame for the big water teststand that becomes crucial for constructing and testing injectors for the BPM-100 engine. The next step is to build fuel tanks and piping systems. The tanks are built of stainless steel pipes to keep costs down, but even though it is the cheapest solution, it’s still around 20,000 DKR in materials, and with a launch around the corner we must take the cost in some smaller bites.

The capsule group is working to get the first Spica mockup done. There will be more news on that soon. 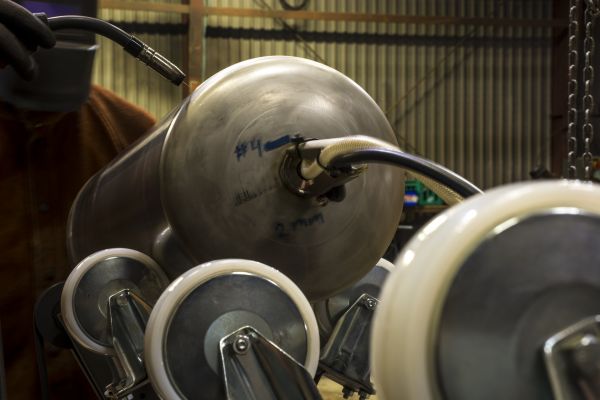 One of the early experiments with our homebuild “robot” for circular welding. (Photo: Sarunas Kazlauskas)

The area where we have our workshop is so cramped now that engine testing is no longer an option. We aim to be able to run the last-minute BPM-5 test but testing of the large engine will not be possible. We’re currently in negotiations about a new place to test the big BPM-100 engine. The idea is to create a static “test site” but let the teststand be built like a container sized box that we can work on at the workshop and then transport to the test site.

Our Homemade Parachute DID NOT WORK!