Our friends from Singapore visited this past weekend. Their project has reached a stage where we are able to test one of their engines. Our friends from the far east are not keen on too much details being released here, thus I will limit myself to conclude that the engine test went well. What makes the test interesting for this blog is the large amount of LOX left over from Saturday. We simply couldn’t let it go to waste, which led us to spend the Sunday putting our own engines through a hastily defined test regime.

As the test Saturday involved a brand new engine, our expensive flow meters was removed, we are not prepared to risk losing them while putting an engine through its first run. This impacts the scientific value of the tests, but we still obtained good data to work with. We did 5 tests in all during Sunday and I will not hesitate to announce that we set a new record. More details on this later.

We put two engines through their paces on Sunday. A brand new engine which is intended for use in Jop’s gimbal setup, and good old Franken 5 was retrieved from the museum exhibition for yet more tests. The test program for Sunday thus looked like this:

”Jop’s engine” differs from our other engines in that it is not manufactured using metal spinning. We have fine tuned the diameter of the cylindrical parts by hydrostatic forming. The nozzle is manufactured on a CNC lathe, and the parts have then been welded together in Jacob’s ”Robot-welding-lathe”. The tolerances using metal spinning was not as good as expected when the first engines was manufactured. We were eventually able to fit the pieces together and end up with 3 servicable engines, but our metal production team have investigated other methods, aiming at simplifying the process. ”Jop’s engine” is a result of this work. 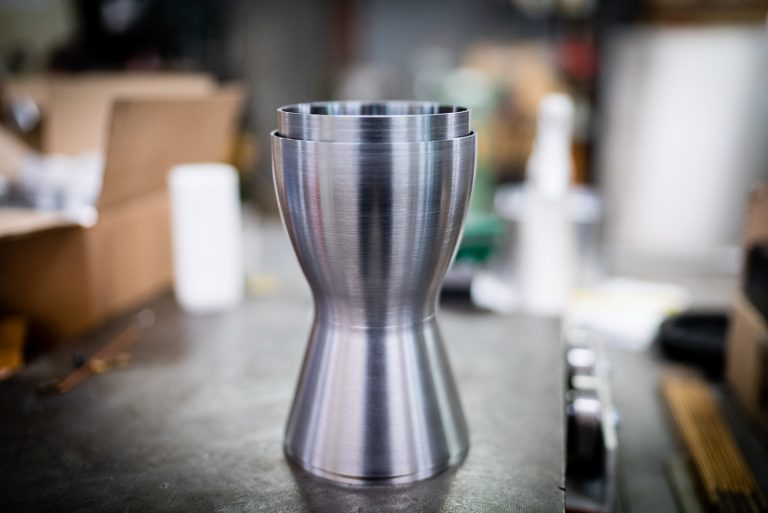 Turned nozzle parts used for the new engine. As can be seen, the required tolerances are quite small, but a CNC lathe is able to deliver.

The new engine in the test stand, ready for its fiery baptism. Photo: Thomas Pedersen.

On Sunday at 13:10:18.727 the engine controller triggered the igniter in the new engine and 2000 ms later the main valves opened and let a mixture of atomized oxygen and ethanol flow into the combustion chamber. The result is best summarised by the graph below.

Pressure graphs for the new engine.

This is not our first engine commisioning, the injector has also been in use before, even flown with Nexø I, but hitting bulls eye with regard to chamber pressure ”straight out of the box” is no mean feat in my book. The resulting measured force of 5,500 N is shown in the figure below. 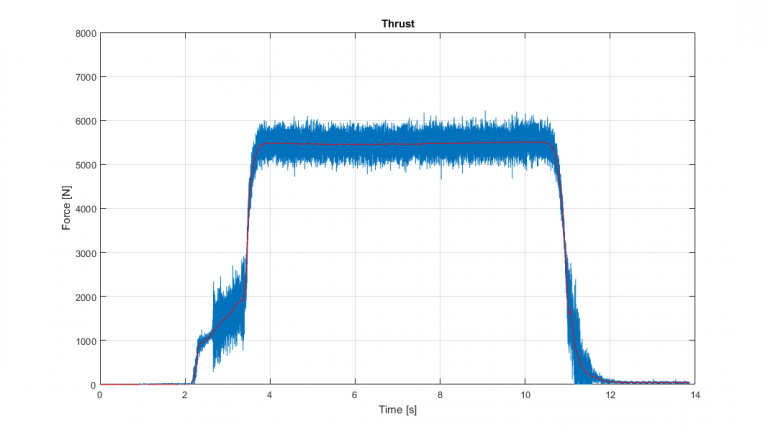 Thrust graph for the new engine.

The engine is thus deemed functional and apparently running smoothly. The two tests using nitrogen also went well. I haven’t investigated in depth yet, but it appears that the duty cycle on the regulation valves being a bit higher is the main difference when using nitrogen. This is expected, as nitrogen is somewhat ”thicker” than helium. I would however like to have a closer look at the aquired data, before comitting to a conclusion. I’ll get back to this in a coming blog. 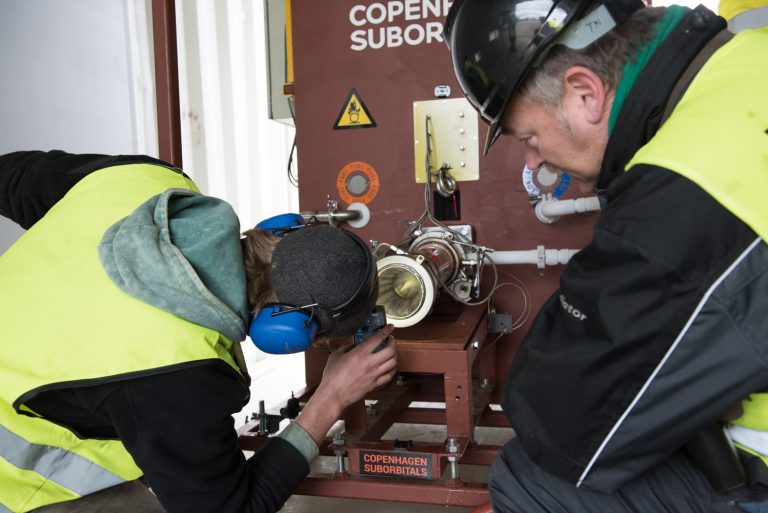 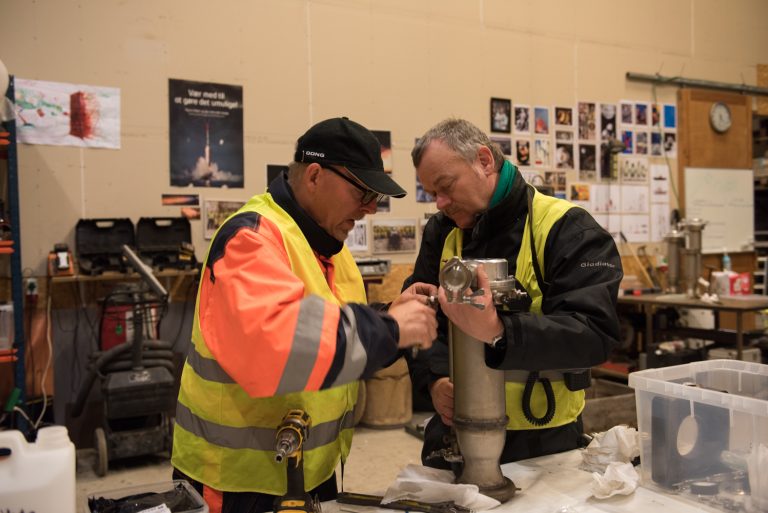 Peter and Thomas retrieving Franken 5 from storage and prepping it for test. Photo: Jens Bastue Jacobsen.

The fourth test of the day reacquainted us to Franken 5. This time featuring a new injector. We switched back to helium as pressurisation gas and again aimed at 15 bar chamber pressure. Franken 5 performed beautifully as always and the new injector seems to be approved. 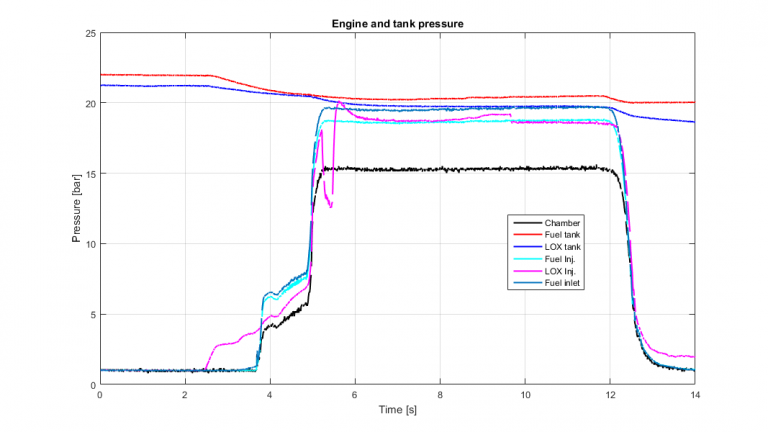 Pressure graphs from Franken 5 and injector #3.

For the final test of the day we let a bit of amusement park feeling enter the test area … We have upgraded the test stand tanks from 33 liters to 66 liters as a prerequisite for our test of the student engine, and the tanks now have the same volume as the Nexø I and Nexø II tanks. And no, I have no idea why CS design tanks in 33 liter increments. The larger tanks lends us opportunity to perform looong tests, and Sunday we wanted to set a new record. For this we loaded 48 kg of ethanol and 62 kg of LOX in the tanks! A sort of preview of the expected Nexø II performance next summer on the Baltic Sea.
This resulted in an approximately 33 second long burn, about twice as long as Franken 5’s former record. A total of 182,000 N-s delivered with an ear splitting, almost infinite roar. Pure bliss, resulting in cheshire cat grins all over Mission Control. 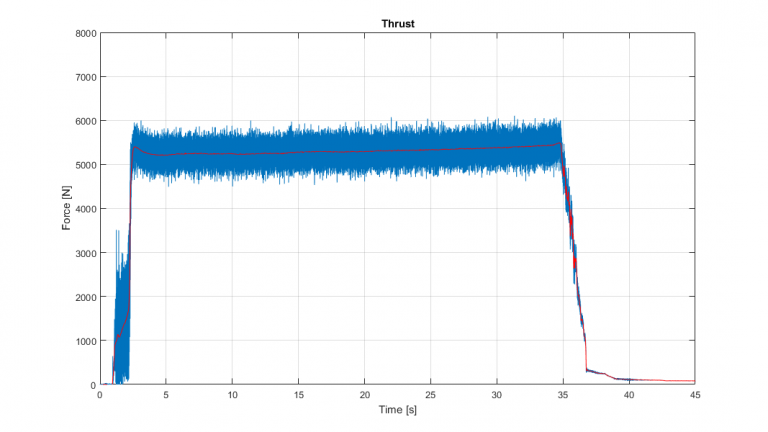 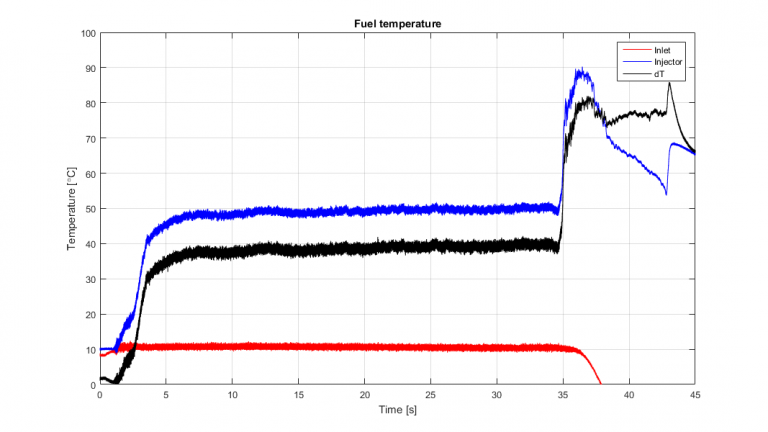 Some of you may have noticed my confident claim that ”62 kg of LOX” was loaded. And yes, we are quite confident about this figure. Because we have borrowed a new gadget for the Singapore project: a capacitive LOX level sensor. It works surprisingly well! It features a display, letting the test stand personnel read the LOX level in millimeters, and in Mission Control the level is displayed on the burger terminal in liters.
I will return next week with a closer look at the aquired test data, and hopefully some video as well. 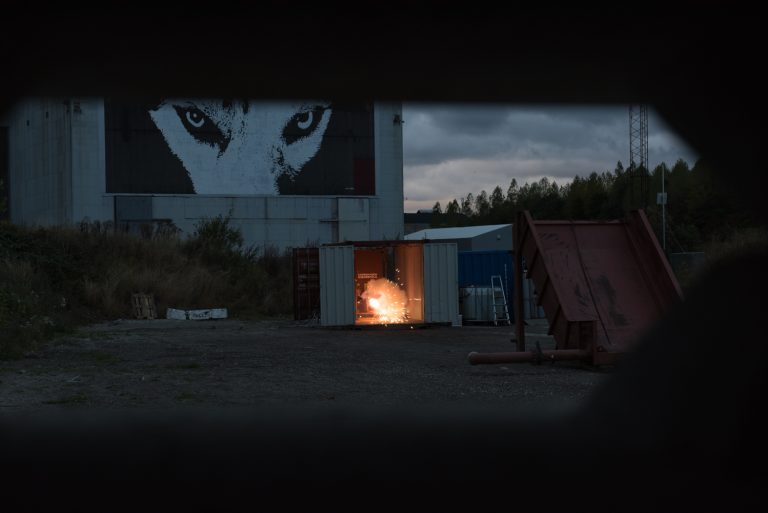 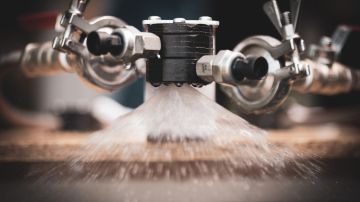 Dear rocket fans, We spent quite a bit of time preparing to solder the first brass swirlers. The idea was to solder them in vacuum. For that we made a nice little stainless steel chamber Read more… 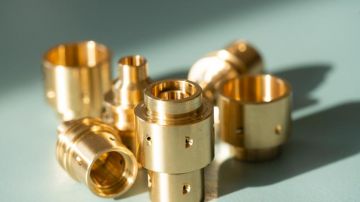 The swirlers have landed

Dear readers, As you could read in our last blog, PH Spaanteknik has helped us to produce a number of prototype coaxial swirlers. We have now received them and I just think you should see Read more…