Yesterday (June 11th) we ran another coldflow test on Nexø I, as it flunked last weekends test. Yesterday went much better, even if we had a few problems.

Video by Claus Mejling from the test this Saturday.

Since last weekends test we have disassembled parts of the system to examine the parts which leaked. After reassembly, the rocked was left pressurised overnight, without showing significant loss of pressure when checked in the morning, which led us to believe we were ready for another coldflow test. Pressurising with gas is not the same as pressurising one of the tanks with a cryogenic fluid. As Niels described in the latest blog, the low temperature results in aluminium being shortened by approximately 4.6 mm per meter. This leads to tension, which again can lead to leaks which are only present under these specific conditions.

Nexø I at the tower ready for hoisting. Photo: Thomas Pedersen. 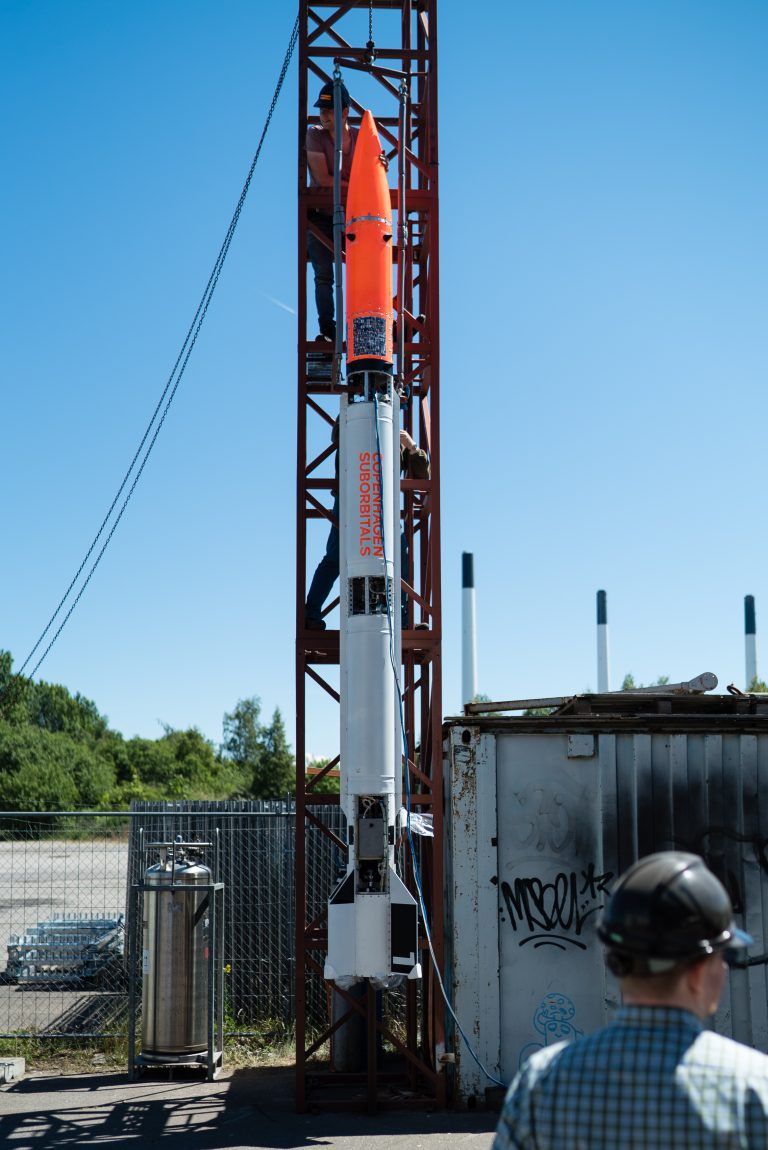 Soon after, the rocket is vertical and locked onto the launch rail. Photo: Thomas Pedersen.

As soon as the rocket was hoisted onto the launch rail we tested the modified load cell setup. The rod between rocket and load cell was a bit off vertically, which resulted in load values between 124 and 148 kg, depending on the rocket’s position on the rail. Some sideways leeway is required for the rocket to be able to move. A grinder and a welding torch was pulled forth, and the position of the load cell was adjusted to make the rod true vertical. This changed the variation in load cell values to +- 1.5 kg, probably the best we can hope to achieve with this setup. We will keep this setup for the upcoming test at sea.
The LOX tank was then loaded with liquid nitrogen. The idea was to determine the rate with which the fluid evaporated, by logging the load cell values over time. The data still remain to be extracted from the system log, which will happen in a few days. After a period of time we closed the LOX tank vent valve and let the pressure build. Here we found that the vent valve has a tiny leak, nothing to be concerned about, the nitrogen evaporated at a larger rate, thus the pressure rised 0.5 bar per minute. When the pressure exceeded 10 bars, it became clear that we had a significant leak in the LOX main valve. The seal around the spindle was the culprit.

It’s a bit hard to see, but in the center of the picture you can just barely make out liquid nitrogen dripping from the valve. Photo: Thomas Pedersen.

We were then forced to dump the nitrogen, thaw the valve, and unmount and disassemble it. The procedure was complicated by the rather tightly packed engine compartment, but out it came and was pulled apart. We didn’t find any obvious reason for the leak, so we just tighened the spindle and assembled it again.

The valve is attached to the servo gear by a special box structure which contains a small optical sensor for reference position detection. Photo: Thomas Pedersen.

After the valve was reinstalled and nitrogen was loaded into the tank, we could proceed with repeated pressurising and leak testing. The result was better this time, although a microscopic leak remained. This leak remains to be dealt with, as the day was approaching sunset and we had exhausted our liquid nitrogen supply, which ruled out any further tests.

Enjoy a moment with Nexø I inside a large nitrogen cloud.

Nexø I “in the thick of it”. Photo: Carsten olsen.

After yesterdays test, all that remains is a very tiny leak in the Lox tank vent valve, and a larger leak in the LOX main valve. The main valve will be serviced and tested during the coming week, after which we will be ready for testing at sea! Assuming all goes to plan, Sputnik will receive her first rocket since the launch of Sapphire this coming weekend. This will be quite exciting, the Nexø I launch is approaching fast!