During the past weekend we performed what we call Sea Acceptance Test (SAT) of Nexø II and the entire launch system. It is a two day test where we set up all equipment and run a  simulated launch at sea under as realistic conditions as possible. 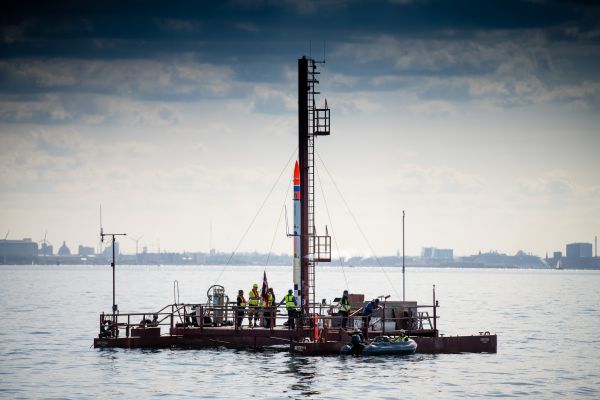 Nexø II at sea for its last major test before launch.

We started Saturday morning 0900 with most of the CS crew ready in the workshop. We were a little challenged by the fact that Copenhell had invited about 20,000 people to a bit of music 100 meters from our workshop… However, it also meant that there was a lovely telescopic loader on scene, which we could borrow to load Nexø II aboard Sputnik with.

Saturday morning we got a look at our latest acquisition, the lovely RIB DSC has donated to us. Johansen had brought it over from Jutland late Friday night. Unfortunately, it did not get too much sailing time on its first trip with us, instead it sparked a quick little rescue operation. During a test trip out of Lynetteløbet, an oil pipe burst and we had to scramble Sputnik to sail out and rescue DSC RIB back to the dock. A little annoying start with our new boat, but hopefully it just needs a couple of new oil pipes and it will be ready again. 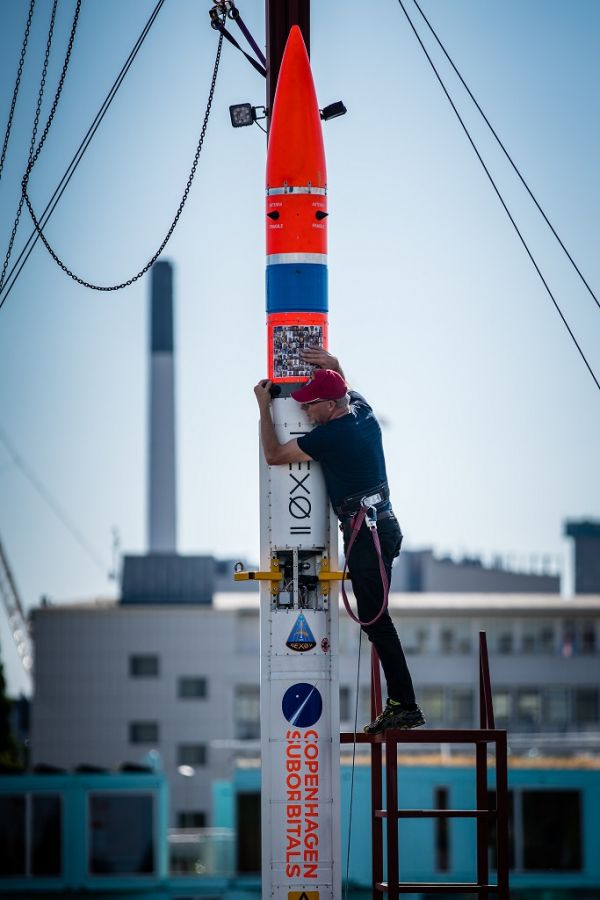 SAT is supposed to emulate the launch weekend as much as possible. Thus, Saturday was intended to be used for setup of equipment and to make a system checkout on both the rocket and our equivalent to Ground Support Equipment (GSE), i.e. the entire launch infrastructure. Sunday we would then sail out in the morning and do a simulated launch. It did not quite go that way though. Due to a few loose ends on Mission Control ship Bolette Munkholm we simply ran out of time Saturday and had to postpone a bit of Saturdays program to Sunday. It was not until Sunday at 14:00 we could finally sail out and “launch” Nexø II. 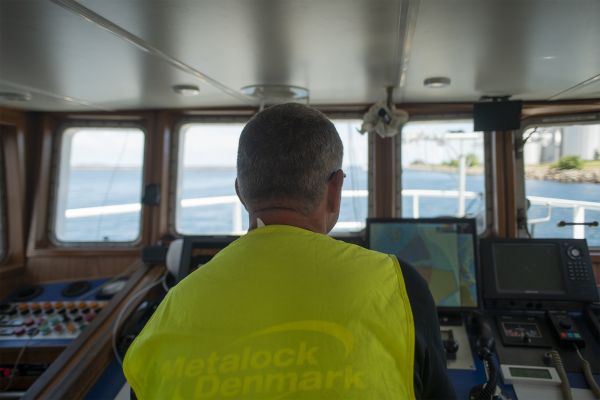 Just like in the coming launch, we went through part of the checklist while sailing to the “launch” site. Thus, the Nexø II onboard video transmitter was tested while sailing in order to verify that we can receive video from it and that Maersk also receives it at home in HAB. We also carried out some checks of valves and sensors and verified that Nexø II, Sputnik, Mission Control and HAB networks were running correctly.

Well arrived at a position a few kilometers north-east of Middelgrunds Fort, we started the critical steps in the launch process. The first step here is to load fuel, for this test it was just a few liters of ethanol. Then we filled the LOX tank with liquid nitrogen and started evacuating Sputnik. Here we ran into the only real problem of the day, namely that the Launch Platform box stopped responding. The Launch Platform box is a network-connected device on Sputnik, whose main task is to turn on the igniter inside the engine, so it’s a pretty important task … We quickly debugged the situation and it turned out that its battery had simply gone too far down in voltage. The solution was to turn on Sputnik’s engines so that the box could get power from Sputnik.

During the debug we had evaporated so much LN2 that we decided to practice a top up situation. That’s a situation where we have had a delay, which means we have to fill a little extra LOX on the rocket. We therefore went a few steps back in the test plan and filled some more cryogenic LN2 on Nexø II’s LOX tank.

A few minutes later, the checklist came to an end and I could turn the Mission Control box from Safe to Arm and activate the fully automated countdown procedure. 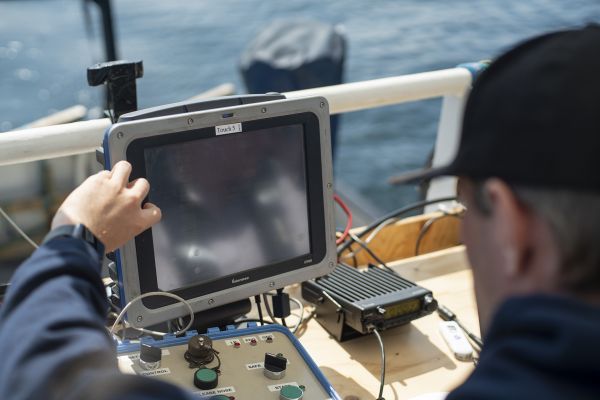 At T-25 the ventilation valve is automatically closed on the LOX tank and at the T-20 pressurization is started for the pre-stage.

A few seconds later, the propellant tanks were up to 8 bar (intentionally low pressure as people were still on Sputnik) and the countdown got into its last 10 seconds. 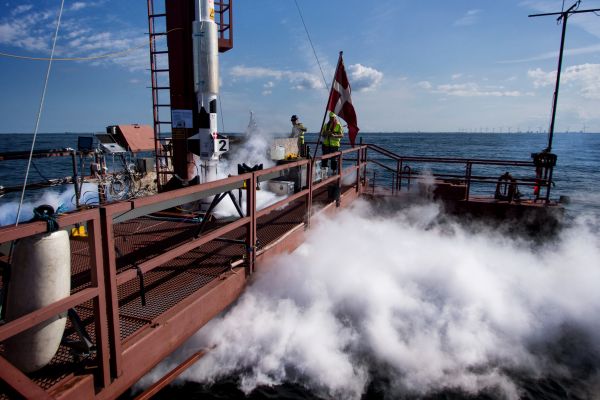 Liquid nitrogen pouring out of Nexø II as an indication of a successful test. Photo: Carsten Olsen.

And a large cloud of vaporized nitrogen poured out of Nexø II’s BPM5 engine. A wonderful sight for everyone on the water.

Thus, the SAT test was more or less over, but we had just a few extra things to test. As we probably do not have the opportunity to work with the Navy Home Guard for this launch, we will have to provide radar coverage of the shooting area ourselves. And thus it is convenient to actually have a Mission Control ship with a radar… However, there was some concern about whether the radar would interfere with our inter-ship wireless network and video stream. Thus, Jesper and Scott fired up the radar to test how it would affect our wireless network systems. Happily, we could not find any disturbances! Instead we could now track lots of ship traffic in the area, even our little blue RIB could be tracked several miles away. This will be extremely important for us during the upcoming launch. 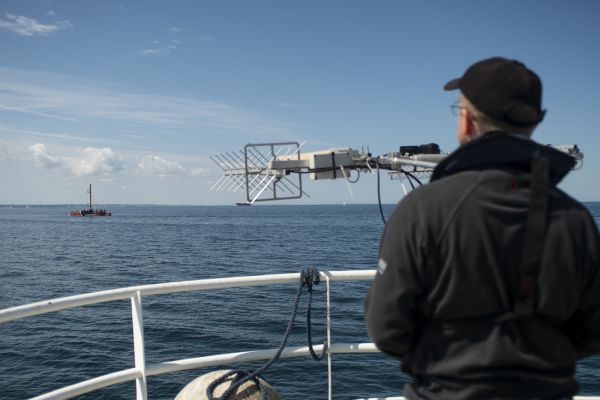 SAT weekend is now over. It involved about 30 people for 12 hours Saturday and likewise 12 hours Sunday. Thus it is quite an undertaking to perform this test but based on how well everything worked our, we can safely say that Nexø II and all the support infrastructure is finally ready! It is going to be fantastic and we can hardly wait to get this baby airborne. The next couple of weeks we are mostly doing paper work with the Danish authorities but soon, really really soon we will see Nexø II fly!

Congratulations!! I wish for all of you the best with the Nexø and all the next future rockets and projects.

Do you use ethanol from renewable resources? If not, please do.

Well they have three ships sailing for hours out there to launch a small rocket. And you are concerned with the Ethanol?
The LOX had also to be produced somehow. Plus all the one-time-use materials.

Using green fuels in rockets is basically greenwashing. Sounds nice but does not really any good in that regard. And to make matters worse todays bio-ethanol is not that green. Mostly made from food crops and someting between 0 and 35% better than diesel.

On top of that, CO2 is not the main concern whith rockets. All the water vapour that is introduced in the stratosphere is much more potent (on the ground it would rain down quickly, but up there it remains for quite a while).

So with rockets we have to live with the fact that they are not clean. However they should not be worse than flying to the other side of the world for holydays or simlirar.

Did you solve now the problem of the automatic tracking system in order to follow the rocket in flyght?