In the last couple of months, we have had a leaky rocket …

It’s in the high-pressure system that there have been a few minor leaks. Most of the leaks have been found and sealed, but a few leaks remain. The last few leaks have shown troublesome to solve. We’ve investigated different solutions, such as bringing a high-pressure compressor with us out to the launch area to load helium up to an hour before launch! But the question is how big a leak can we really allow in the DPR system of Nexø II?

Let’s figure it out.

Nexø II has two identical tanks for LOX and ethanol. The volume is 133 liters in total. When the engine is running, fuel will flow out of the tanks and helium will flow in to ensure a constant pressure in the tanks. For Nexø II, the pressure in the tanks is approx. 20 bars. When all the fuel is exhausted, the fuel tanks will thus contain 133 liters of helium at 20 bars. This correlates to 2660 standard liters (SL) of helium. As a minimum, we need the 2660 SL to run the Nexø II engine at its optimal operating point.

However, there is still a big margin down to the required 2660 SL, we could leak about 1000 SL of helium and still be ok.

And how much is Nexø II leaking? We’ve measured that in a series of tests with nitrogen, but the final and crucial test was with helium.

Pressure and temperature from the DPR system on Nexø II. Illustration: Thomas Pedersen.

Looking back on the first graph, you will see that there is also a red and a yellow line. These lines show pressure development if it is related only to the temperature effect. We can therefore directly see how much we lose due to temperature and how many we lose through a leak.

So where is the gas leak then? Well, on graph number 2 you see the pressure in the fuel tanks. It’s hard to see, but there are two lines that are just on top of each other. You can see that the pressure rises to 11 bars at approx. 45 hours. At that point someone has ventilated the fuel tanks manually.

So, we have a leak to the fuel tanks, but it’s not big enough to explain the total leak, so we’ve got a leak to the outside world too.

On plot number three, the amount of gas on board in the DPR tank in SL is also seen. As seen, we reach almost 6900 SL at 345 bars. What’s interesting is the amount of time from pressurizing of the DPR tank until we have lost to much helium.

We have calculated that we need at least 2660 SL (expanded) for the flight. In addition, the last 20 bars (400 SL) cannot be used because by then there is pressure balance between the DPR tank and the fuel tanks. If we calculate the 2660 expanded SL to pressurized SL via our 65% utilization estimate and add 400 SL, we’ll need the tank at lift off to contain minimum 4500 SL, equivalent to 225 bars. From the graphs we see that we won’t hit that level before around 100 hours after pressurization. Note, however, that the last pressurization was at 23 hours, so we have approx. 75 hours from pressurization of the DPR tank until liftoff.

That means we can pressurize the DPR tank on the day before and even though we will lose some, we still have lots of helium on board for the launch

Published by Thomas Pedersen on 29th May 2018

It is all compromises, but how dangerous is leaking helium in a matter of safety/unwanted explosions?

I can only related it to my highly experimental high power electronics hobby, here it is just a saying that anything below 10 Ampere is just leakage current 😉

Given that helium is completely inert, there should be no explosion risk. I’d still be concerned given the price of helium however..

There is no danger about the leaking helium. It is only a matter of how fast it leaks. If it would leak 100 bar over night we would have an operational problem in the sense that we would need to drag the compressor out to sea and re-pressurerize the DPR tank right before lift off.

Regarding the delta T; Why not use a heat exchanger (or sink) as the He passes from the He tank to the LOX/EtOH tanks. You guys must have thought of this, but I’m curious as to the answer. There is an obvious heat source. How many seconds is the burn, and what deltaQ/t do you need?
Thx

The “right way” to use onboard helium is to store it as cold as possible, run it through a heat exchanger around the engine and introduce hot helium into the propellant tanks.

On several large launch systems the helium tanks are stored inside the LOX tank, thus the helium is at LOX temperature. And then it is heated by passing a heat exchanger on the turbo pump gas generator.

We deemed it too complicated for Nexø but we might try some sort of heat exchanger on Spica/BPM100.

I just read that you are having problems detecting leaking from the DPR tank. It occurred to me that tank leakage must be a major problem for fuel stations. There has been a lot of research on detecting sources of leakage from gas tanks. I found this information: https://www.astm.org/DIGITAL_LIBRARY/STP/SOURCE_PAGES/STP1161.htm Unfortunately they charge for the PDF documents containing their research findings on gas leakage detection technology. But maybe this is worth your while to check out further, if their information is not already known to you? Good luck!

Hi Christian,
I’m a bit unsure if we can compare our issue with that of a gas station. Without detailed knowledge of gas stations I don’t think they run at as high pressure as we do.
But thanks for the input.

I have noticed you don’t monetize copenhagensuborbitals.com,
don’t waste your traffic, you can earn additional bucks every month
with new monetization method. This is the best adsense alternative
for any type of website (they approve all sites), for more info simply search
in gooogle: murgrabia’s tools 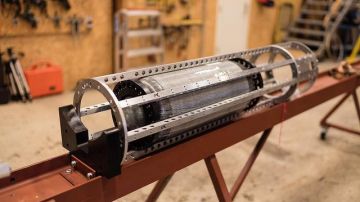 Dear readers, Designing the world’s largest amateur rocket is not an easy task. It’s an iterative process with a lot of dependencies. One of the very important dependencies relates to the rocket’s “propellant delivery system”, Read more…