Let’s get the most important news out in the open immediately – The Vostoks diesel tank is repaired and ready to use!

Monday evening, we will take a look at the weather forecast and into each other’s eyes and then we’ll make a Go/NoGo decision for the upcoming weekend. Phew it is so exciting!

Flight events
Over the last 18 months or so we have been working towards the upcoming launch. Many subsystems have been designed, developed and tested along the way, and the flight will be the culmination of all this work.

But what is it that we can expect to see? The following diagram shows very well in a simple form the individual events:

The main events of the Nexø I flight, as they appear in a diagram. Graphics: Jonas Linell

But as we discussed at a weekly meeting recently, why show drawings when we have the actual hardware ready to show? So now that we actually have iron, carbon fiber, nylon, electronics and lots of other stuff ready, why not let those items speak their own language?

That is why I have I have collected a number of videos from our Youtube channel which will give a good idea of what it is we will experience during the flight of Nexø I.

BPM-5
When the countdown hits 0, the first we will experience will be the roar of our BPM-5 engine! A roar we have heard many times before, so why don’t we enjoy it once more while we wait.

Jet vanes
When the rocket leaves the launch rail, the on board guidance an navigation computer takes over the control, and using the four jetvanes under the engine the computer will control the rocket in a vertical path that maintains the position over Sputnik, regardless of wind conditions on the way up.

Nose cone
At the top of the flight we will separate the nose cone in order to deploy the balluten which will stabilize the rocket on the trip back down. 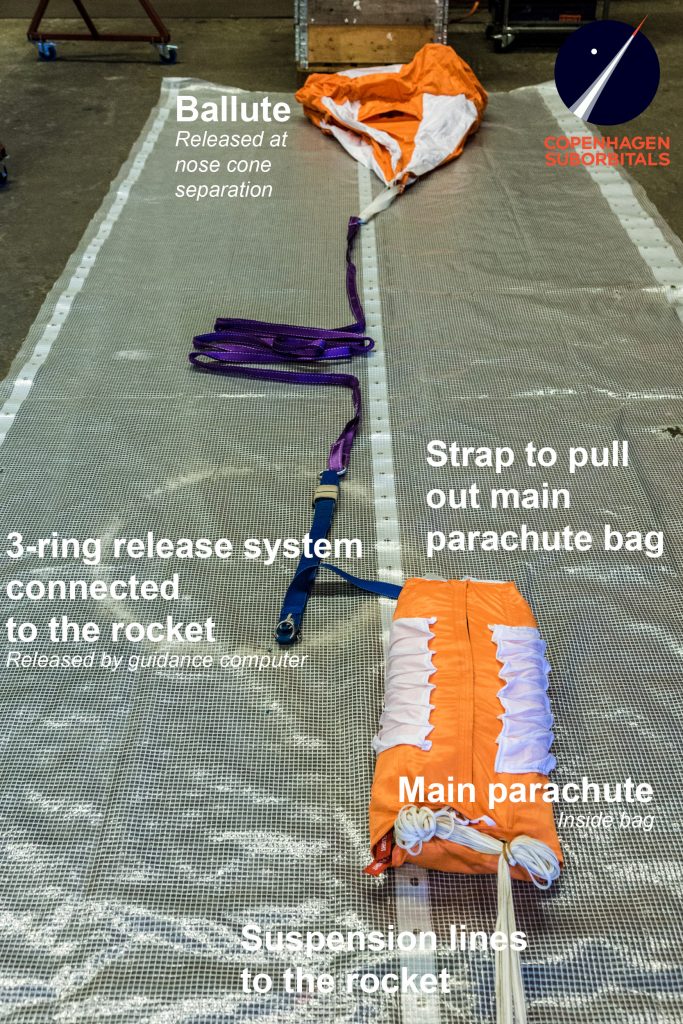 The parachute system in Nexø I. Photo: Mads Stenfatt

At apogee the ballute is deployed and at 3 km altitude the ballute will be released, which then pulls out the parachute.

Ballute
Located in the nose cone, the ballute will be released at apogee. The ballute’s function is to stabilize Nexø I on the way down, and take the top of the speed before the main parachute is released.

The parachute is deployed at 3 an altitude of 3 km. It opens in two stages using a reefing system. This is to ensure that deceleration does not happen too quickly, so that the parachute and payload have a greater chance of survival.

Course overground
On the journey back to Mother Earth, Nexø I is in the power of Sir Isaac Newton as well as the winds. Using the weather forecast on the time of writing this for Saturday 23/7 in ESD139, we can expect Nexø to land about 1,400 meters away at course 157 from Sputnik.

Possible course over ground from apogee

Pilots and aircraft wanted!
We are in the sad situation that all the pilots in our usual air division are unable to participate in the launch campaign in the coming weekend. That means that we are looking for a pilot with a (ultralight) aircraft who wants to participate in our launch. The tasks are reconnaissance, help in clearing the area for unrelated sea vessels, photo, and help with search and recovery of the rocket after landing. Do you have time and want to participate, please send me a mail immediately at mads.stenfatt {at} copsub.com or contact me on tel: +45 61996106 so we can discuss the details of the mission.
Thank you
The tension is almost unbearable – we are so excited!
Thank you to all of you who help making this project possible.
We get help in so many different ways that it is hard to fully understand. One thing is certain: It is heart warming and it confirms us in our view, that we believe we are on the right track with the plan we have toward a future manned Spica rocket.
Ad astra,
Mads